Please see event flyer using the following link for more details: 2019 Scouting Clinic Flyer. We hope to see you there!

The entomology program recognizes the logistic difficulty in scouting. We know that you have to cover a large acreage in a limited amount of time, you manage multiple crops, and some weeks, frankly, you would rather spend the time with your family. We get it.

So, let’s chat about how to scout cotton for plant bugs, and the amount of money that it will make you, in the fewest possible bullet points:

Figure 1. Comparison, in terms of lint yield, of different sampling methods for tarnished plant bug (sweep net, drop cloth, and sweep net until 2nd week of bloom combined with drop cloth after) and different thresholds (low, medium or recommended, high, and very high). Favoring the low threshold (1 per drop cloth sample) was profitable when using a drop cloth alone, but this did not make money over using a medium threshold in the combined method. Regardless, you make money if you sample and spray by any method. Not every Virginia field will experience this high pressure. 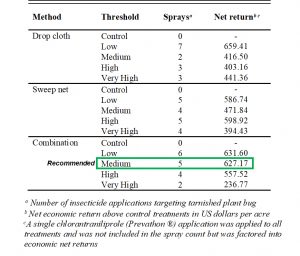 As always, best wishes for a profitable 2019. Please reach out to Sally or myself if you have questions or concerns. I hope that you have the opportunity to spend this weekend with the people and activities that you value most. Happy 4th y’all!

Plant bug populations have been spotty, and lower overall than this time last year (click to see map). 10% or fewer of Virginia fields need insecticide applications this week, but, unfortunately, a much higher percentage will end up treated. Before making a decision to spray without scouting consider several things:

Spraying for plant bugs at or exceeding threshold will pay off. Keep in mind that sprays during flowering typically yield higher returns. These two Focus on Cotton presentations by NCSU (click here) and VT (click here) will tell you what you need to know about plant bugs in our region (follow links).

If you need help scouting, ANR agents Josh Holland (Southampton) and Elizabeth Pittman (Suffolk) will be hosting scouting clinics in July. More information coming soon. Beat sheets are available to you free of charge at these events and at the Taylor lab at the Tidewater AREC. Stop by anytime Monday through Friday 8 am – 4 pm. We are closed next Thursday and Friday.

A big thank you to FMC, BASF, and Corteva for sponsoring this round of beat sheets!!

A big thank you to Josh Holland for his help scouting this week! 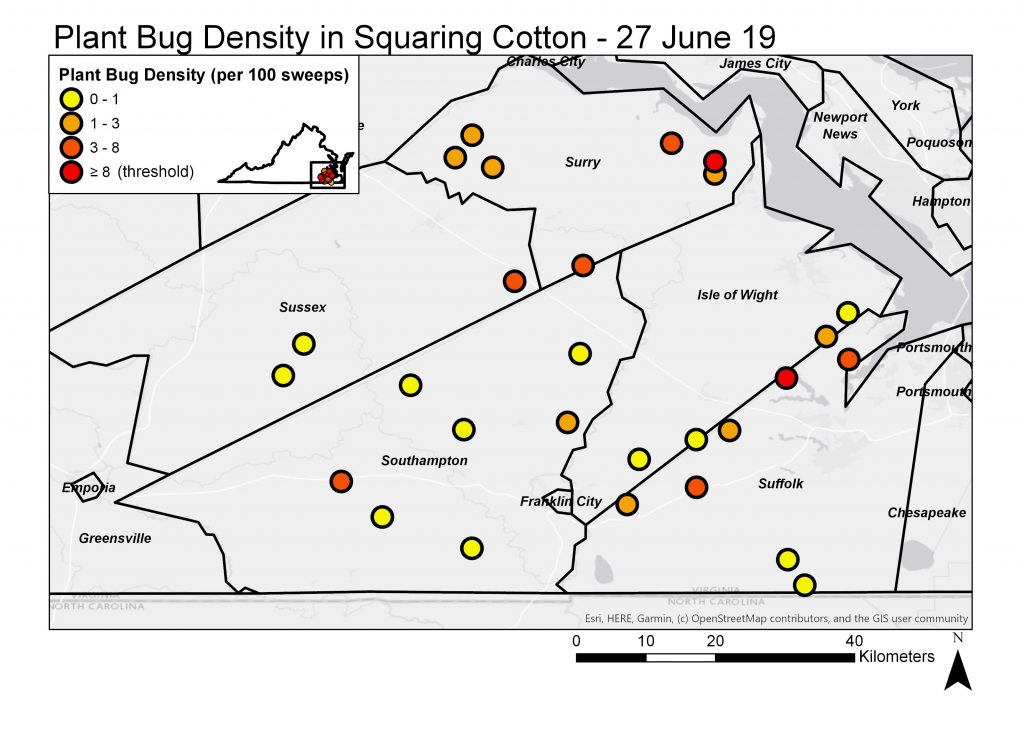 We recommend scouting for plant bugs as soon as cotton begins squaring. We encourage everyone to scout for plant bugs, especially those that saw high numbers last year. Early in the growing season (pre-bloom) we are scouting for adult plant bugs immigrating into cotton from flowering weedy hosts and other cultivated hosts nearby (corn, wheat, soybean). Plant bug adults (pictured below) are approximately 5-6mm in length (quarter inch) and can be identified by their yellowish brown body color, conspicuous “Y” shape on their scutellum or upper back, and two yellow dots on their cuneus or lower back. For pre-bloom cotton, we recommend sweep net sampling with an action spray threshold of eight plant bugs (adults and nymphs) per 100 sweeps. This can be done by conducting four to eight random 25-sweep samples throughout each field. We also recommend measuring square retention before bloom by sampling 25 random plants in each field and calculating the percentage of missing or black squares from all first positions on whole plants or the top five nodes. Consider a spray application for plant bugs if the insect threshold is reached (8 plant bugs per 100 sweeps) and square retention is below 80 percent.

Click on this video link to see sweep net sampling technique in cotton. 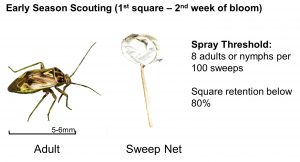 Click on this video link to see drop cloth sampling technique in cotton.

Common insects in cotton fields that are often confused with plant bugs include big-eyed bugs, aphids, and stink bug nymphs (pictured below). Big-eyed bugs head and eyes are wider than their body. Aphids are a secondary pest and are generally smaller and slower than plant bug nymphs with two tailpipes or cornicles on their lower back. Stink bug nymphs have a more shield-like body shape with three black stripes on their antennae.

Insects that are often confused with plant bugs include big-eyed bugs, aphids, and stink bug nymphs.

The single most important management strategy for plant bugs in cotton is applying insecticides at the recommended action thresholds described above. The bar graph below highlights lint yield gained when applying insecticides at various thresholds (low, medium/recommended, high, very high) using sweep net only, drop cloth only, or both (as described above). We see that the highlighted recommended threshold using sweep net sampling pre-bloom and drop-cloth sampling during flowering was one of the highest yielding treatments with the highest economic returns among treatments with five or fewer spray applications. The major take-home from these data is that any scouting technique (sweep net and or drop cloth sampling) at any threshold, is going to significantly increase lint yield and economic returns when plant bug infestations are present!

Economic returns above the untreated control when properly managing cotton for plant bugs.

Tarnished plant bugs have continued to be a problem in flowering cotton in some Virginia cotton fields. This week, scouts found 10 out of 30 fields above the bloom threshold of 2-3 plant bugs per drop cloth sample across Virginia’s cotton-growing region. Six of these fields averaged above the bloom threshold for the past two weeks (see map below). Dirty blooms may indicate plant bugs are present but should not be used as a threshold for spray decisions. Cracking bolls and observing internal boll injury in small dime and quarter-sized bolls is also a great indicator bugs may be present and causing significant damage. Internal boll injury includes raised warts or outgrowth on the carpel wall, small black punctures that usually match an external lesion, and stained lint. We recommend observing at least 25 bolls per field for internal injury in addition to drop cloth sampling to make informed spray decisions. Plant bug populations have peaked in mid-August over the past few years in Virginia so we recommend continued scouting during the coming weeks. Check out this video if you would like to see a short tutorial on drop cloth sampling. 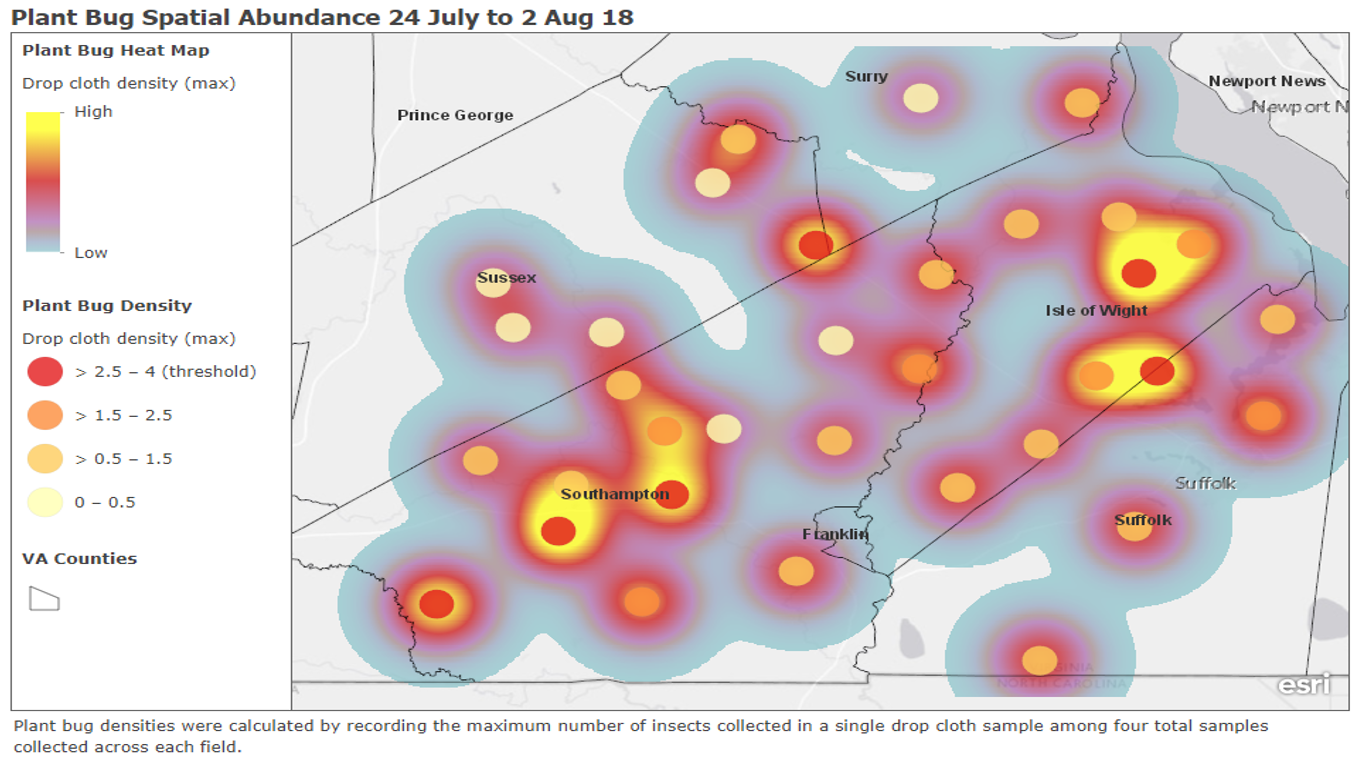 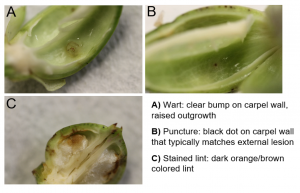 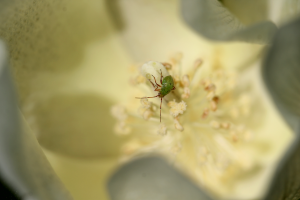 Twenty-three representative cotton fields in eight Virginia counties were scouted weekly for mean plant bug density. Data for the July 17th to August 3rd sampling period is represented in the distribution map below (follow link to view). Red dots on the map represent fields that have averaged at or above the spray threshold for plant bug during the sampling period. Plant bug densities for multiple fields has increased substantially since the last update in mid-July. Nineteen of the 23 sampled fields have reached the spray threshold at least once this season since sampling began in late-June. Plant bugs are present in every county sampled and are likely present in at least low numbers in all cotton growing counties in the state. Therefore, we recommend scouting your cotton fields regularly for plant bug.

The spray threshold for plant bug in Mid-Atlantic cotton is eight plant bugs (i.e., adults and nymphs) per 100 sweeps in addition to square retention below 80 percent. We recommend conducting four to eight random 25-sweep samples throughout each field. Once flowering begins, we recommend continuing sweep net sampling and also looking for dirty blooms (pictured below) or sample dime to quarter size-bolls from 25 random plants for internal feeding damage (e.g., warts, stained lint, punctures). Spray treatment may be warranted if dirty blooms and or internal damage exceeds 15 percent and plant bugs are also active in the field. Please refer to the Virginia Cotton Production Guide (pg. 23)  or Pest Management Guide (sect. 4, pg. 88) for spray recommendations if spray threshold is reached. 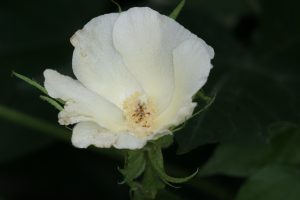 When viewing the distribution map in full-screen mode, click on the left arrow icon to view map legend. Click on individual fields represented by colored dots on the map to view mean plant bug density for the sampling period as well as total mean density for the season. Mean plant bug densities were calculated by sampling four sweet net samples (25 sweeps per sample) and four drop cloth samples across each field. Total adults and nymphs in a single visit were totaled and averaged for each visit within the sampling period. 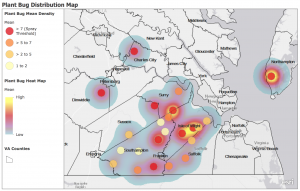 Twenty-three representative cotton fields in eight Virginia counties were scouted weekly for plant bug abundance and square retention. Data for the June 28th through July 13th sampling period is represented in the distribution map below (follow link to view). We will continue to post updates to the map through peak plant bug abundance in cotton. Sweep net and drop cloth samples were taken for each field to account for sampling bias associated with sweep net sampling towards adult captures and drop cloth sampling towards nymphal captures. When sampling cotton fields for plant bugs, look carefully for nymphs (pictured below). Since nymphs are flightless, they may spend more time feeding in an isolated area and cause more damage than adults because their movement in and out of fields is limited. The action threshold for plant bug in Mid-Atlantic cotton is generally eight plant bugs (i.e., adults and nymphs) per 100 sweeps in addition to square retention below 80 percent. 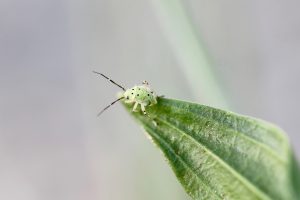 When viewing the distribution map in full-screen mode, click on the left arrow icon to view map legend. Click on sampling labels on the map to view square retention and number of samples taken from each site. Mean plant bug densities were calculated by sampling four sweet net samples (25 sweeps per sample) and four drop cloth samples across each field. Total adults and nymphs in a single visit were totaled and averaged for each visit within the sampling period. 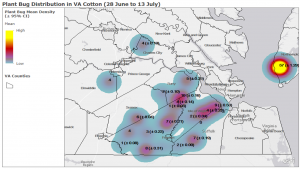 My name is Seth Dorman, and I’m a graduate student with Dr. Sally Taylor in the Virginia Tech Department of Entomology. My research focuses on tarnished plant bug (Lygus lineolaris) management and distribution in Virginia cotton. In recent weeks, large numbers of tarnished plant bug have been active throughout southeastern Virginia in fallow fields and ditch banks with an abundance of flowering, weedy hosts as well as in corn. Plant bugs have begun migrating into some early-planted cotton fields and were observed in cotton fields in Suffolk and Southampton counties last week. 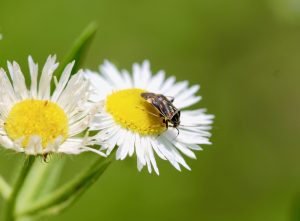 Tarnished plant bug may move from preferred alternative hosts into cotton fields as flowering weeds senesce, and cotton plants begin to develop small, pinhead squares and subsequent flowers. Feeding during early squaring can cause plants to abort squares. Feeding on larger squares and small bolls may cause anthers in flowers to turn brown (“dirty bloom”), and small bolls to shed. Sustained feeding by tarnished plant bug from first square to early bloom can delay maturity and result in substantial losses. Scouting cotton fields once or twice a week is highly recommended after squares become visible on plants. The best indirect method for sampling plant bug is estimating square retention. Square retention can be measured by calculating the percentage of squares in the top two or three nodes of 25 randomly selected plants in a given field. If square retention drops below 80%, direct sampling for plant bugs with a sweep net is recommended. For sweep net sampling, conduct a minimum of eight 25-sweep samples randomly throughout your cotton field. We recommend using Admire Pro or other neonicotinoid products until bloom. Adult plant bugs can reinfest quickly following applications. Use restraint when treating early in the season when plants have time to compensate for injury. 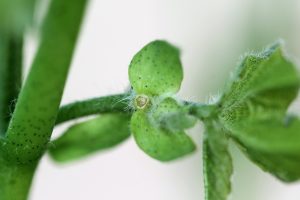 Scar of an aborted square at the fruiting site on a cotton plant.