Annually, we conduct a survey to estimate Helicoverpa zea (corn earworm) infestation levels in field corn in mid- to late July. Corn is considered a nursery crop for corn earworm, allowing the pest to complete a lifecycle and then move on to other crops such as soybean, cotton, and peanut in August. Over 30 years of data show that there is a linear correlation between the infestation level in corn and the amount of soybean acreage that gets treated with insecticide for this pest.

To conduct the survey this year, the number of corn earworms found in 50 ears of corn was recorded in 5 corn fields in each of 29 counties, totaling 7,250 ears and 145 fields sampled. When fields were known to contain Bt or non-Bt corn, this was noted. Otherwise, samples were considered to be random and assumed to be representative of the actual Bt/non-Bt composition in each county. Age of corn earworms, or if they had already exited the ears, was also recorded (data not shown). We greatly appreciate the help of Virginia Cooperative Extension Agriculture and Natural Resource (ANR) Agents, Virginia Tech faculty and staff, and volunteers in this effort. These cooperators are acknowledged in the attached Figure. We also would like to thank the many growers who graciously allowed us to inspect their fields for corn earworm.

This survey is intended to be a representative sample, not a complete picture. We always recommend scouting individual fields to determine exactly what is happening in terms of corn earworm as well as other pests and crop problems. Also, please check the black light trap reports on the Virginia Ag Pest and Crop Advisory and other reports posted weekly to keep up-to-date on the insect pest situation. 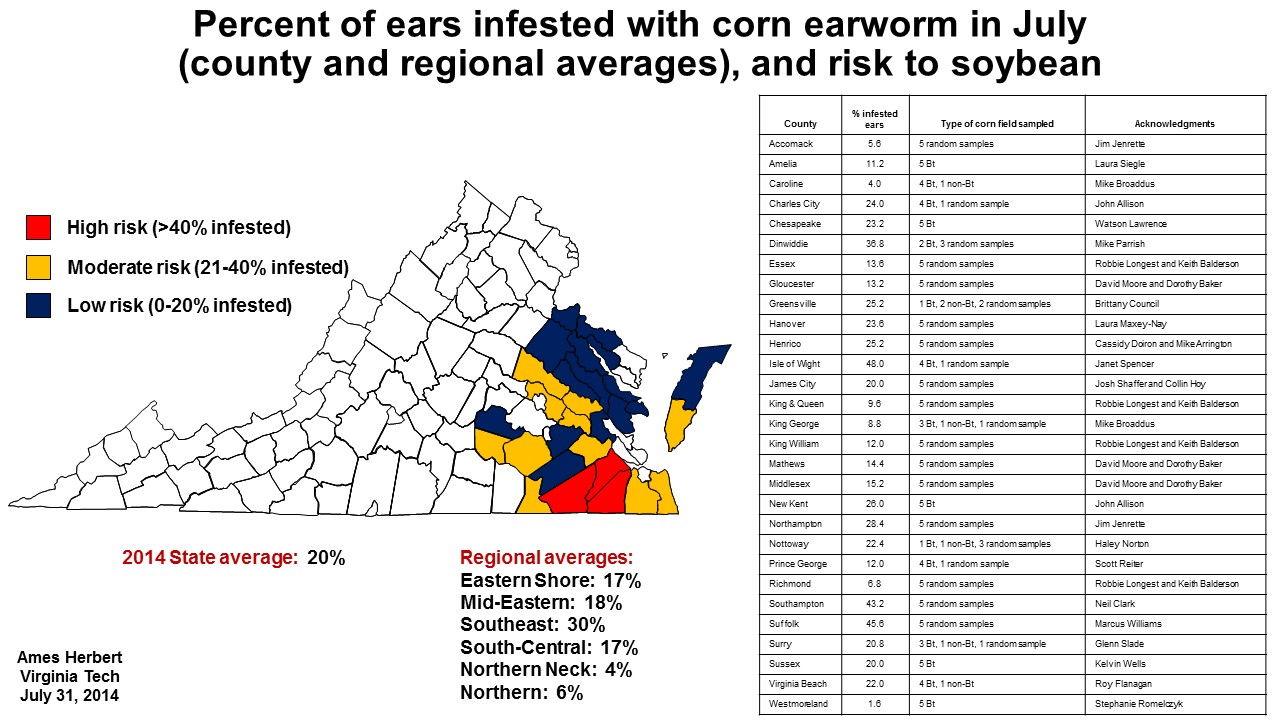 Unfortunately, late blight has been confirmed in Leesburg, VA by the Plant Disease Clinic in Blacksburg. Potato and tomato growers (especially in the northern part of the Commonwealth) should take precautionary actions and increase scouting. For more information on late blight please refer to the extension publication link about this potentially devastating disease. Please let us know if you have any more questions.
http://pubs.ext.vt.edu/ANR/ANR-6/ANR-6_pdf.pdf

Got stink bugs? We need your help! We’re surveying growers to assess the impact of BMSB on crops and gather information that will help us defeat this pest. Receive a free Guide to Stink Bugs* if you complete the 10-minute BMSB survey (copy and paste the URL)
(https://cornell.qualtrics.com/SE/?SID=SV_5ssnjXLNhvp6v1H).

Your participation will help us to help you Stop BMSB! The survey will be available until June 30th.

Thank you from the Outreach Team for “StopBMSB,” a project focused on the biology, ecology, and management of the brown marmorated stink bug. For more info: StopBMSB.org

On Monday January 27, 2014 a workshop “Getting Started in Vegetable Production” will be held prior to the Mid-Atlantic Fruit and Vegetable Convention at the Hershey Lodge, Hershey, Pa. The convention runs from January 28-30, 2014. This workshop is intended for beginning vegetable growers or those thinking about getting into the production of vegetables. The workshop will cover important topics that growers need to think about when contemplating entering into growing vegetables. The speakers at the workshop have years of experience working with vegetable growers and will provide a wealth of information that will prove useful to beginning and new growers. The cost of the workshop is $35.00 and will be separate from the registration for the convention. For more information on registration contact Bill Troxell, Executive Secretary, Pennsylvania Vegetable Growers Association at “William Troxell” or phone: 717-694-3596.

The Virginia Tech vegetable entomology program, in collaboration with the horticulture sustainable agriculture program, is conducting a survey of vegetable growers to gain valuable insight on current practices and issues as well as better tailor future research needs.

We would greatly appreciate your time and cooperation in taking the online survey accessible through the following link: https://survey.vt.edu/survey/entry.jsp?id=1384452235649. Copy and paste the link into your browser’s URL address bar if the link will not redirect you.

Should you encounter any issue with the survey or wish to receive a copy of the survey for completion, please contact me at: hdoughty@vt.edu

Thank you. Your participation is greatly appreciated.

Please see the attached disease alert on the recent discovery of late blight in Virginia, unfortunately, our first report of the year. Additional information: lateblightalert072313-doc

Today we identified late blight on tomato plants on the Eastern Shore of Virginia. The plants had recently been sprayed and were not sporulating actively. Growers should scout and take preventative measures. Hopefully drier conditions will suppress spread of the disease. Univ. of Maryland reports late blight of tomato in Montgomery Co., MD. Growers in the northern parts of the state should be alert as well.