The 2016 survey of Virginia soybean for brown marmorated stink bug (BMSB) and kudzu bug is now finished.  We would like to acknowledge the Virginia Soybean Board and the USDA/NIFA Extension Implementation Project for their funding support.  Since mid-July, scouts Ed Seymore, Jamie Hogue, and the Tidewater AREC entomology crew made 867 soybean field visits to 68 counties for this project.  Ed and Jamie traveled a combined 22,600 miles.  BMSB were found in 42 counties, with the highest populations coming from Bedford, Shenandoah, Rappahannock, and Orange Counties.  Please see the map for the BMSB densities. 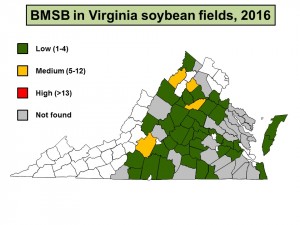 Large numbers of green stink bug were reported in soybean in King George (11 greens per sample), Nelson (12), New Kent (10), Rappahannock (11), and Lunenburg (9); these beans were all in the R6 growth stage.  The threshold for R3-4 to R7 stages is 5 stink bugs per 15 sweeps.  Moderate green stink bug populations (approximately 3-5) were reported in most of the other counties surveyed this past week.  After R7 (beginning maturity),  the stink bug threshold is doubled.

Scouts reported less than one kudzu bug nymph per 15 sweeps this week.  Over the course of the season, kudzu bugs were found in soybean in 32 counties.  Here is the final kudzu bug map: 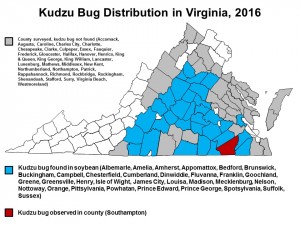 We conducted 77 cypermethrin vial tests this week with 61% survival by corn earworm moths.  We plan to finish out the season with what we collect and test next week.  The seasonal average now stands at 43.1% survival. 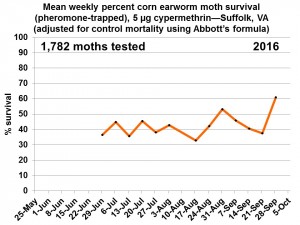 Finally, our black light traps have been shut down for 2016.  The assistance of the participating Virginia Cooperative Extension Agents, growers, and Virginia Tech faculty and staff in this study is greatly appreciated.  Here are the final tables for this season:  BLT_29_Sep_2016