According to the weather recordings (http://webipm.ento.vt.edu/cgi-bin/infonet1.cgi), the heat units received by peanuts grown in Virginia from May 1 through September 5 are in average 2370 °F.  There are, of course, location variations. For example, in Suffolk total heat units from May 1 is 2566 °F, in Southampton 2314 °F, Greensville 2480 °F, and Waverly 2123 °F.  The current Virginia type commercial cultivars predominantly grown in Virginia require in average 2650 °F to optimum maturity. With a daily average of 70 °F recorded in the past week, optimum maturity seems to happen in the next day and a half to 7.5 days. However, would it?

Probably not, and the pictures below prove it. Today, Sep 6, we determined the maturity of four cultivars, Bailey, Sullivan, Emery and Wynn, planted in Suffolk on May 3.  Based on the mesocarp color, when laid on a color maturity chart, it seems that a minimum of 20 to 24 days are still needed to reach the optimum digging for this location and the current season. In average, cultivars only have 1% of black pods, 14% brown, 20% orange, 44% yellow and 22% white.

Pod blasting demonstrations will take place this week Friday, September 8, at the Southampton Fairgrounds from 8:00 AM to noon. It will be a repeat at Indika Farms in Windsor on September 14; times will have to be determined, but probably also in the morning. See you there with your peanut samples to be pod blasted! 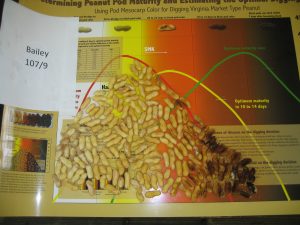 Current maturity of Bailey peanut planted on May 3 In Suffolk, VA. 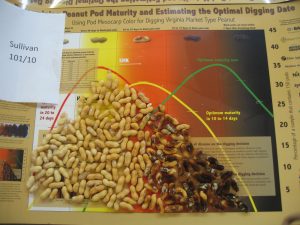 Current maturity of Sullivan peanut planted on May 3 in Suffolk, VA. 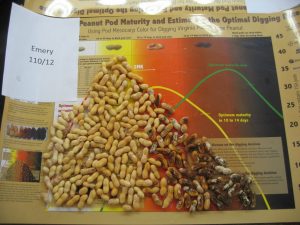 Current maturity of Emery peanut planted on May 3 in Suffolk, VA. 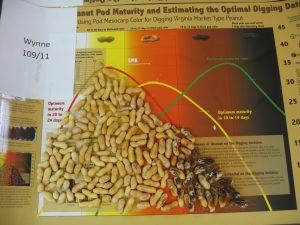 Current maturity of Wynne peanut planted on May 3 in Suffolk, VA.