Brown stink bug numbers have continued to increase in eastern Virginia from the Northern Neck to the Tidewater region. We have scouted fields in Suffolk and Caroline County with higher than threshold infestations spanning the entire field. Infestations in most fields remain confined to border rows and the majority of infested fields are near where wheat has been recently harvested. 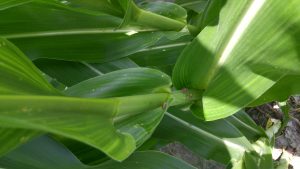 Many growers are facing the decision to treat. Previously I had reported a threshold of 1 bug per 4 plants. In order to be extra protective during ear formation and elongation, treatment at the 1 bug per 10 plants threshold can be justified for heavily infested fields. More information about stink bugs in corn can be found here – NCSU corn stink bug management considerations.

The ability of stink bugs to injure corn depends heavily on corn growth stage. Trials at the Tidewater Research Station have shown that stink bug feeding does not always reach developing ears. The photo below shows a healthy ear developing  (VT growth stage) despite multiple feeding lesions to the outside of the stalk. This may be good news for Virginia growers. We cannot determine if yield was effected in these plants until later this season. 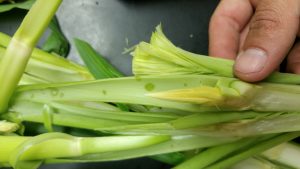 This week, we will be rechecking fields  that were treated with aerial applications and post updates on the effectiveness of these sprays.