As many of you know, the sugarcane aphid has moved north faster than last year.  We now have confirmed reports of SCA in three southern counties of Kansas.  In addition, SCA is present as far north as Kentucky and Virginia.  In these northern sites SCA populations for the most part are low but have approached threshold levels in Virginia.  It is likely that at least low populations will be discovered in many counties within the Sorghum Belt in the coming weeks.

It is important to note that just because a few SCA are present in a field does not mean an insecticide application is or will be justified.  Those who planted hybrids with some tolerance to SCA can expect the populations to build more slowly.  In addition, beneficials in many areas are reported to be in high numbers, this will also help keep SCA populations in check.  Although SCA was present in South Texas this year, only a portion of the fields reached threshold levels.

Something we have clearly learned the last two years is that once SCA is present in an area, scouting of fields becomes critical.  Scouting should occur at least once a week once SCA has been discovered in a region, and in fields where SCA has already been detected, scouting should take place at least twice a week.  Insecticide application should begin as soon as the SCA population is at threshold levels.  Research has shown yields can be drastically reduced if insecticide application is delayed for several days once threshold levels are reached.  States and regions vary slightly in their recommended threshold levels, but in general, an insecticide application is justified when 50 aphids per leaf are present on 25 percent of the plants. Consult your state or regional extension service for specific threshold information.  We are entering a critical time in the Sorghum Belt, and SCA can potentially reach threshold levels very quickly.  Diligence in scouting is an absolute must!

There are two products that should be considered if an insecticide application is warranted.  These are Sivanto prime from Bayer, and Transform WG from Dow AgroSciences.  Both are effective, but good coverage is critical.  Most entomologists recommend 4 – 5 ounces of Sivanto Prime and 1 – 1.5 ounces of Transform WG.  The lower rates are usually recommended to control SCA at or close to threshold levels.  If SCA populations are way above threshold levels, then the higher rates may be justified.

If other insects such as midge or headworms are present with SCA, avoid using pyrethroids for their control.  Pyrethroids can lower beneficial populations significantly and cause a rapid increase in SCA populations.  In the South Plains region of Texas the ‘yellow’ sugarcane aphid is showing up in a few fields, often in the same fields with sugarcane aphid.  Care should be taken in distinguishing between these two aphids.

Although sweet sorghum is a minor U.S. crop, sugarcane aphids can greatly impact yield.  Sivanto prime has received a section 18 Crisis Exemption label in Mississippi, Arkansas, Tennessee and North Carolina for use on sweet sorghum in 2016.

NOTE from Ames Herbert, VT: Note that the ‘yellow’ sugar cane aphid mentioned above is a different species than SCA. Yellow sugarcane aphids are covered with small hairs and the two cornicles (pair of small upright backward-pointing tubes found on the top side of the last segment of the bodies) are small and pale (see attached image).  The SCA is also called ‘white’ sugarcane aphid. It does not have hairs on the body and the two cornicles are dark (see attached image).  Yellow sugarcane aphid is a known pest in Virginia of forage grasses like orchardgrass. Like Texas, we are also finding yellow sugar cane aphid mixed with SCA, and in a few fields also mixed with corn leaf aphid, another known pest of corn and sorghum. Corn leaf aphid is easy to distinguish from the other sorghum aphid species as they have a dark head and legs, a dark green body color, and dark cornicles (see attached image).

This sorghum aphid problem is new for us so we are having to make some ‘educated guesses’ about what constitutes a threat, and what the best control options might be. For now, we suggest that SCA numbers should guide control decisions, that is, abide by SCA thresholds—and stick with the products that are recommended for SCA. Avoid the use of pyrethroids since they will not be effective against SCA, and could flare secondary pests by disrupting natural enemy populations.  Natural enemies including tiny aphid parasitic wasps and a variety of lady beetles can be very effective in helping reduce aphid and other pest populations, so we need to conserve them whenever possible. 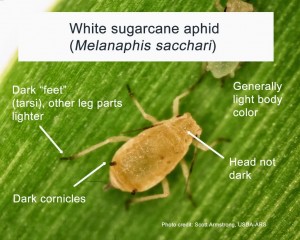 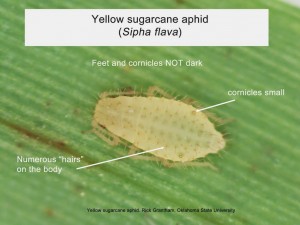 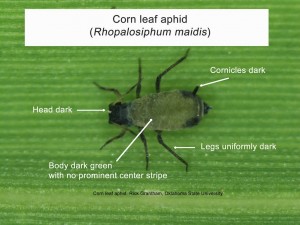