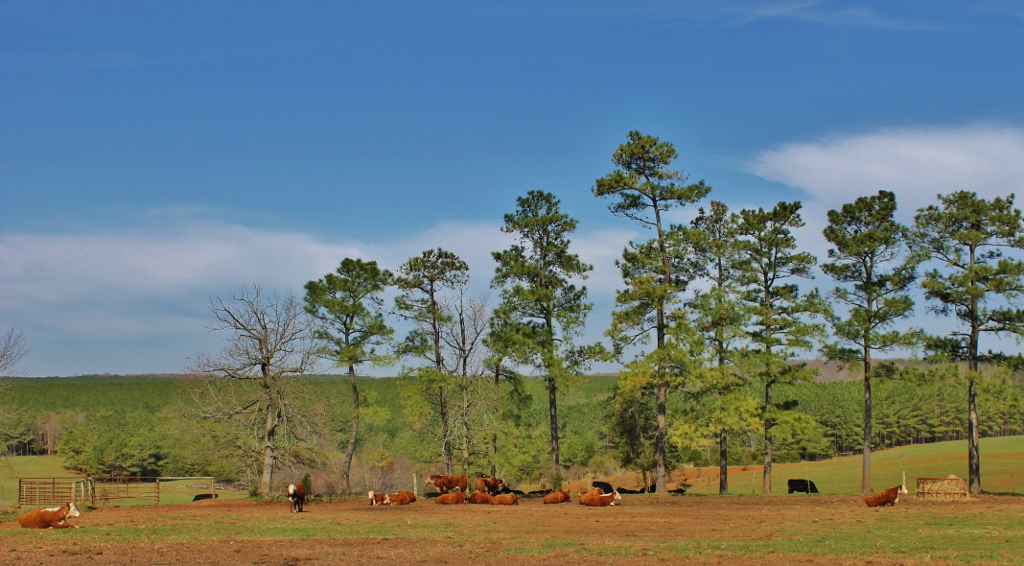 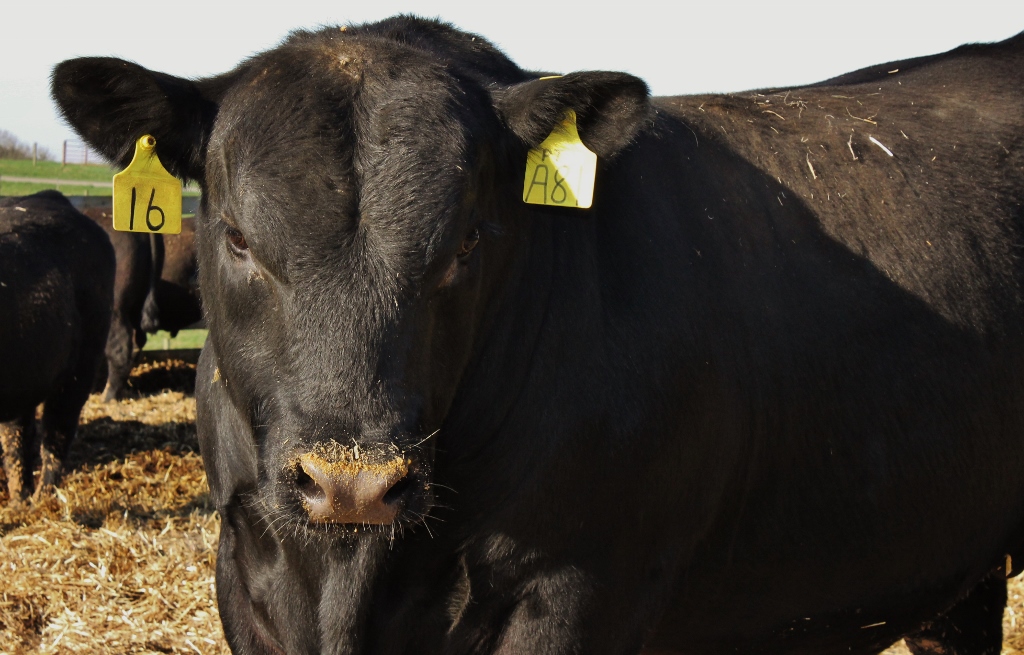 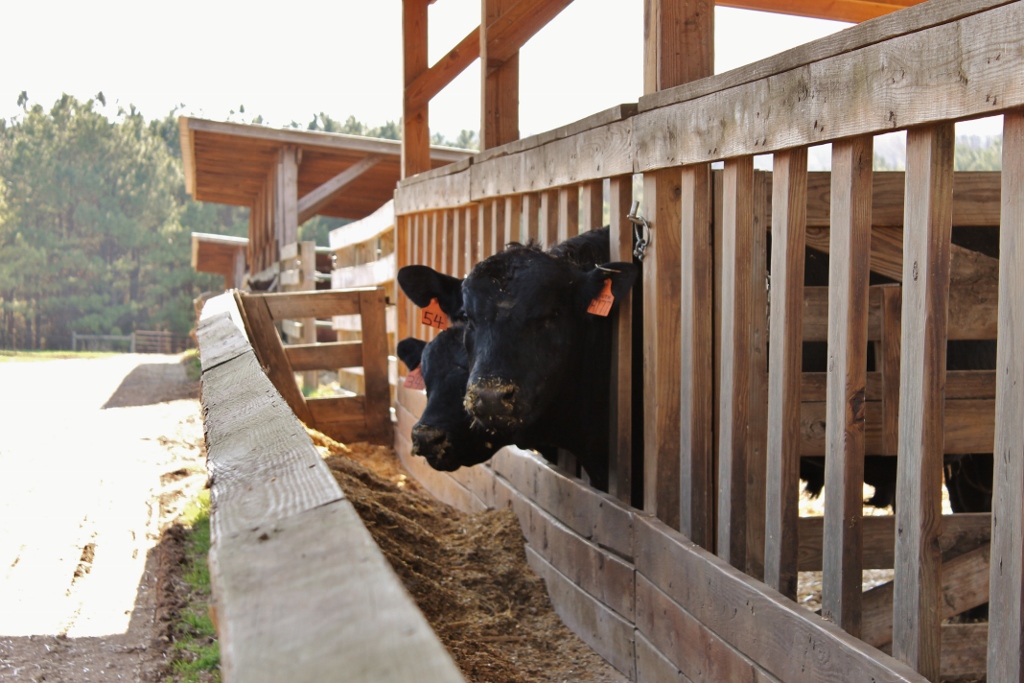 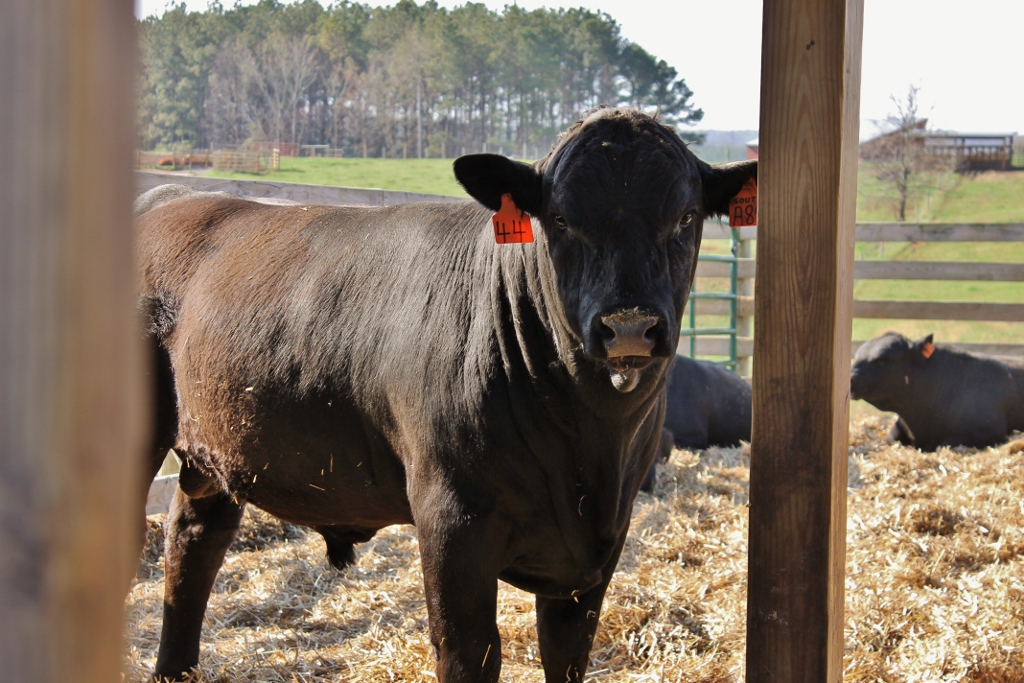 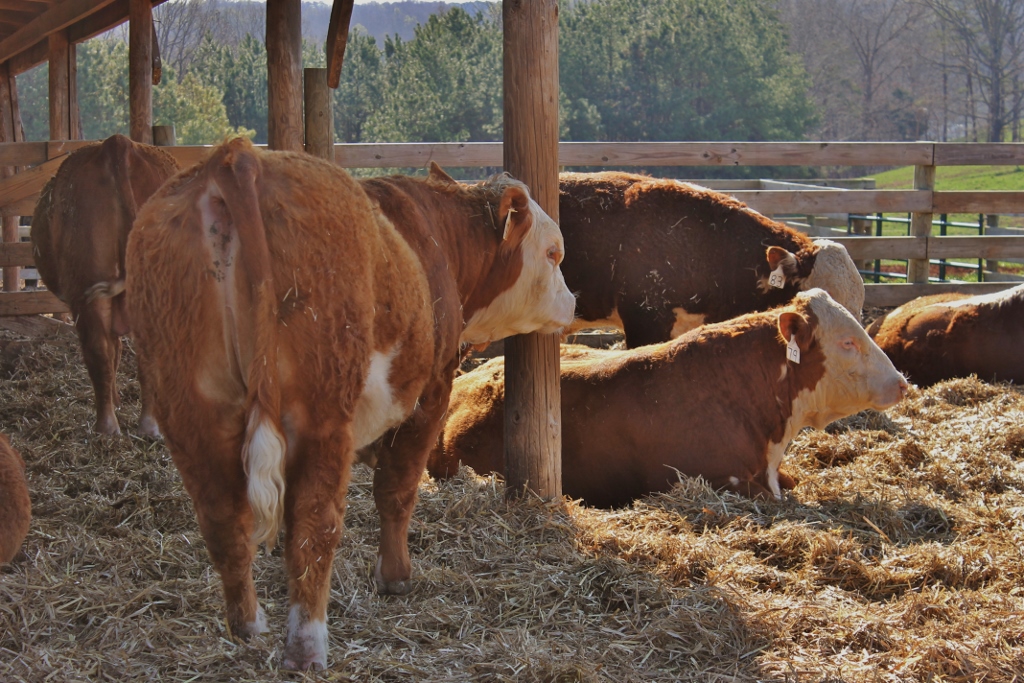 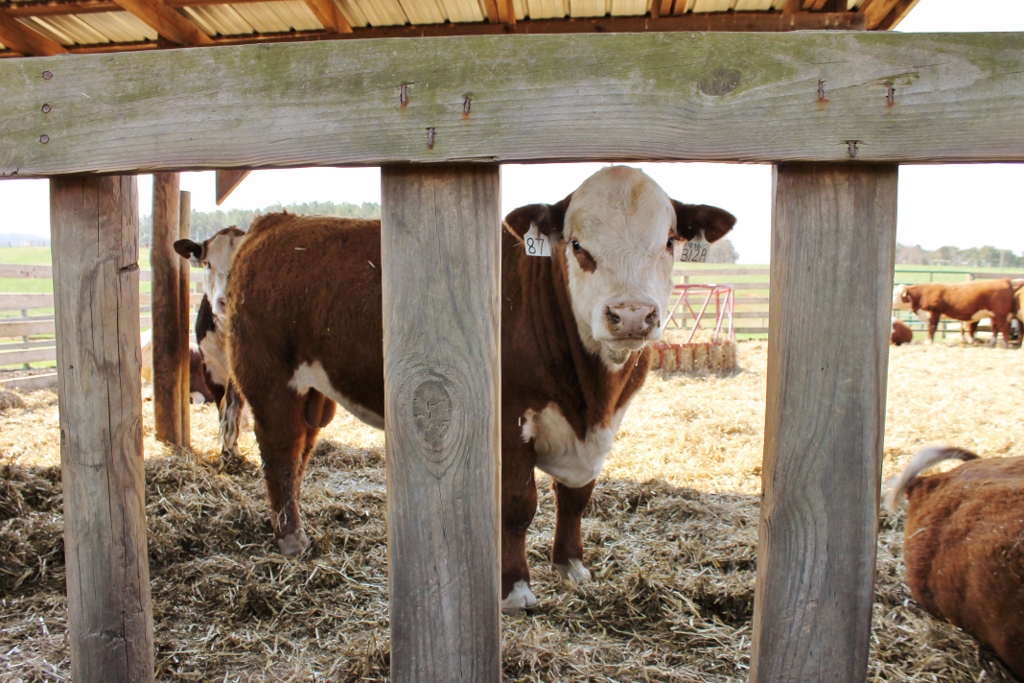 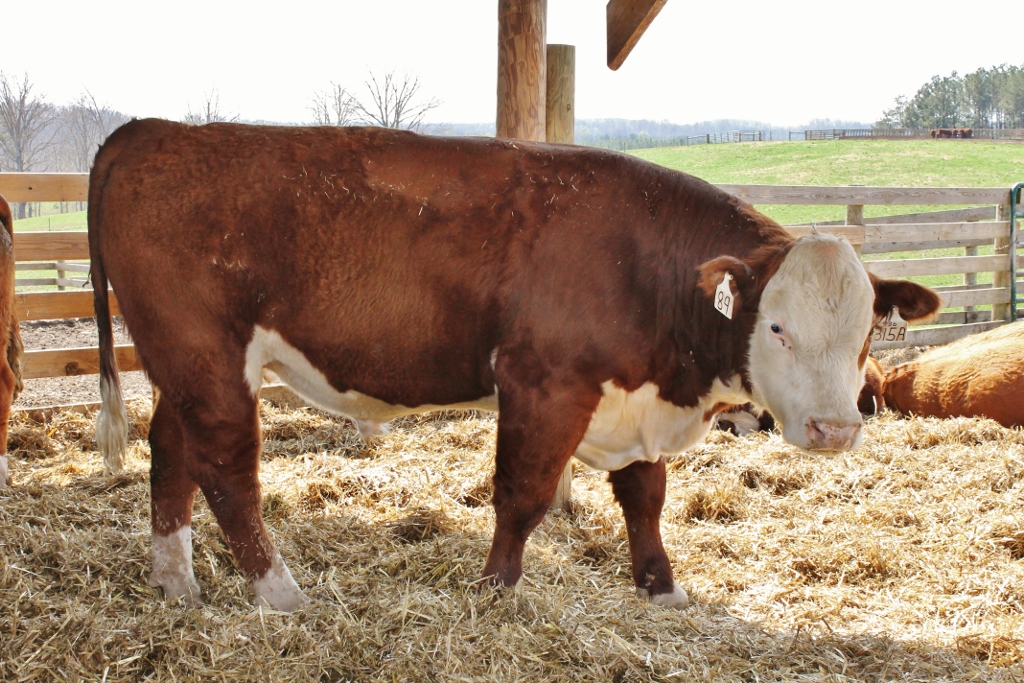 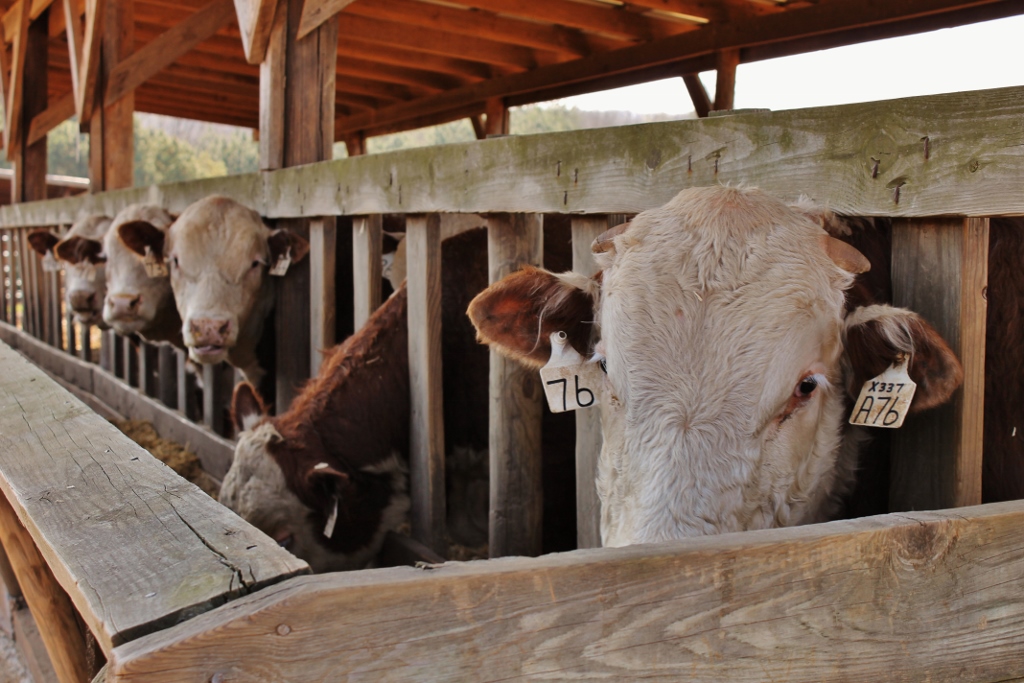 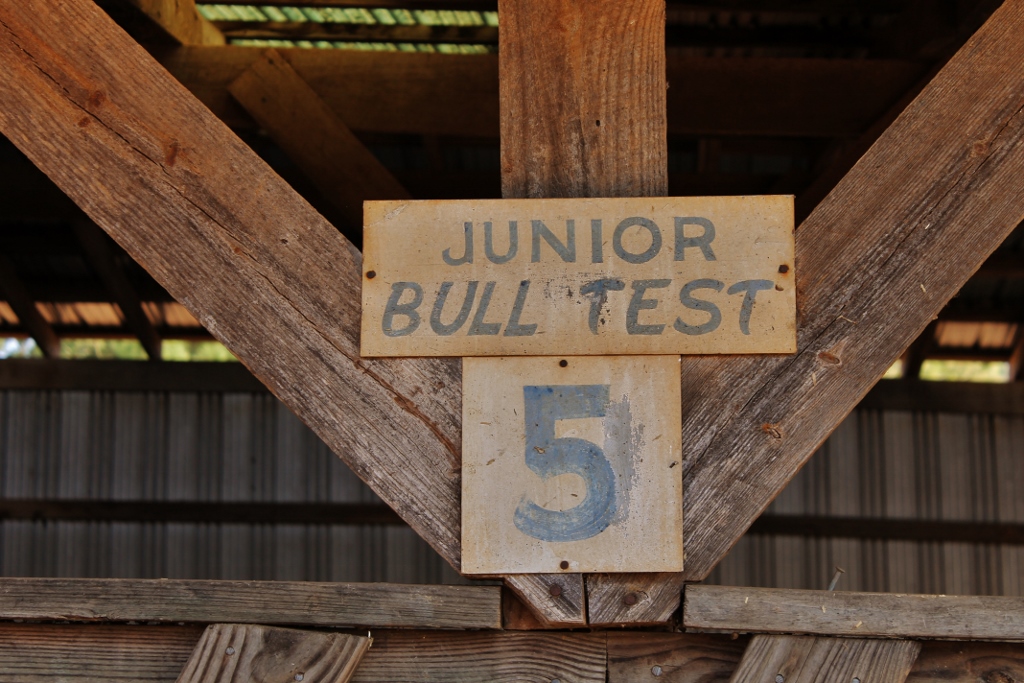 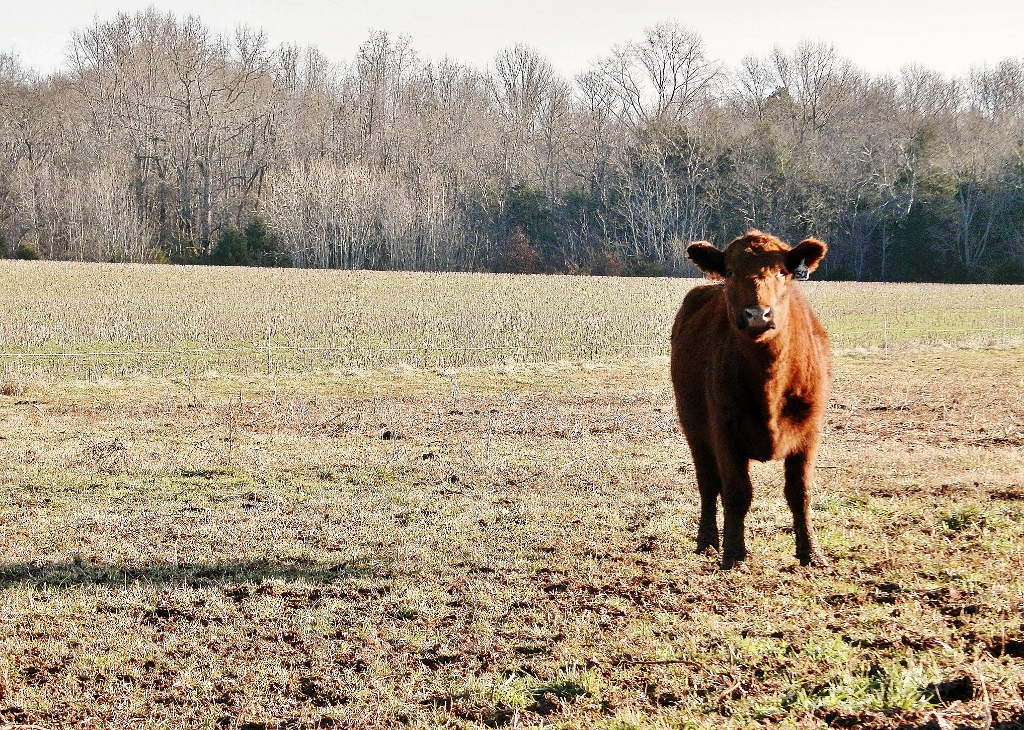 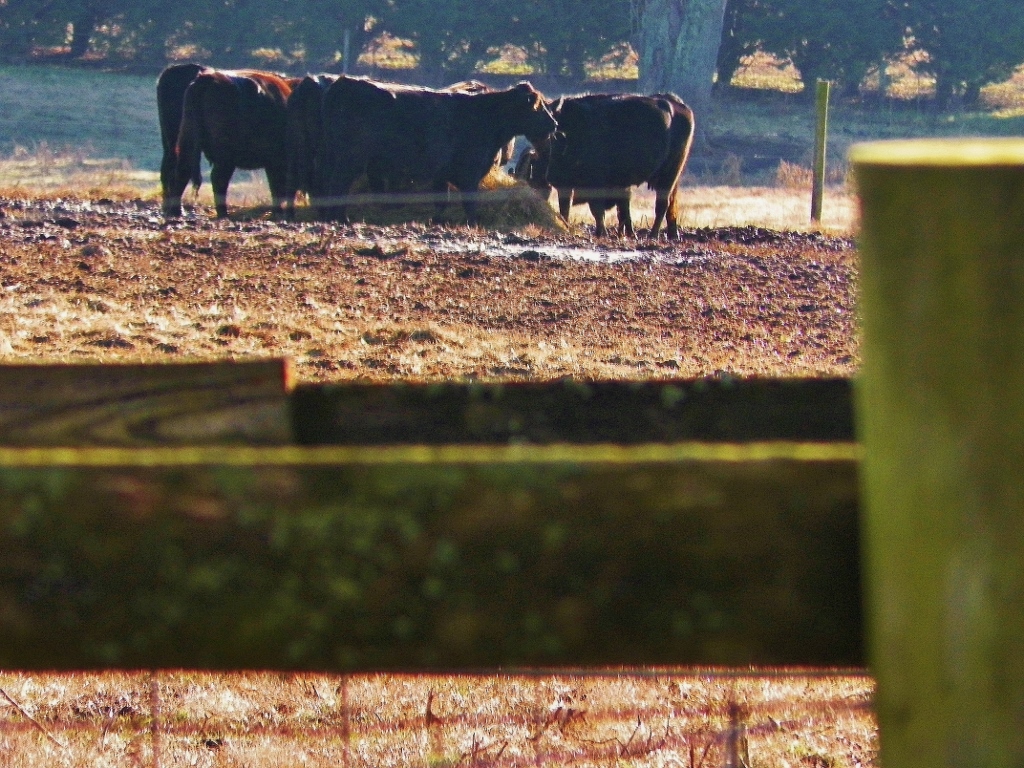 Robert manages cattle as part of a partnership called Cross River Farms, LLC. Robert’s operation is located at Dungeness Farm, which has fascinating roots in early American history. Dungeness was built by Isham Randolph in the early 1700s, and Thomas Jefferson’s mother was raised there. Today at the Goochland farm, Robert specializes in several aspects of cattle production. In addition to running a cow-calf operation that includes Red Angus cattle, he custom-raises Holstein heifers for a nearby dairy farm. He also manages a group of females for the Amelia Area Cattlemen Heifer Development Program. Heifers in this program are produced and owned by individual livestock producers from across the region, but they are brought together to live at Cross River after they are weaned.  They are bred in December and undergo further development through the winter. In the spring, most return to the herds on their home farms where they were born. A few are sold in April to buyers looking for high-quality females for their cow-calf herds. 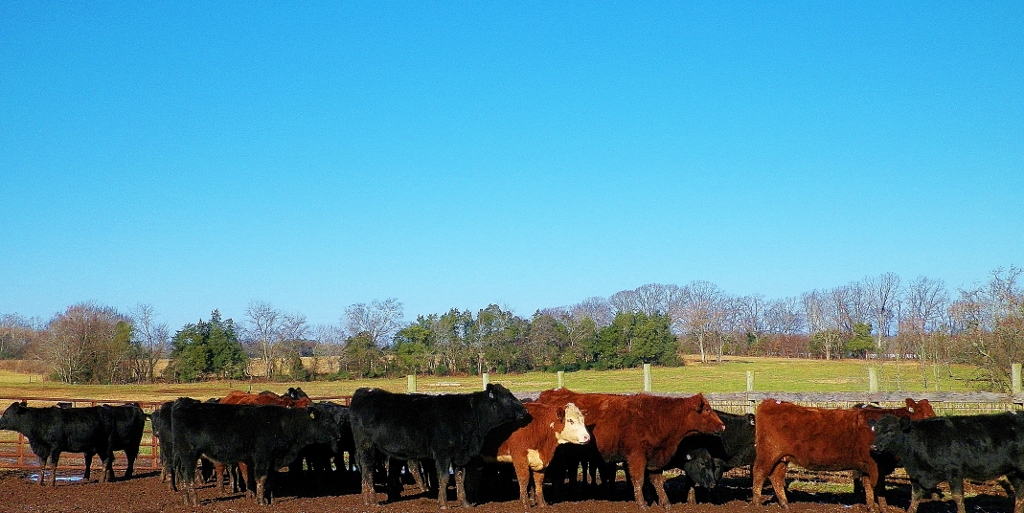 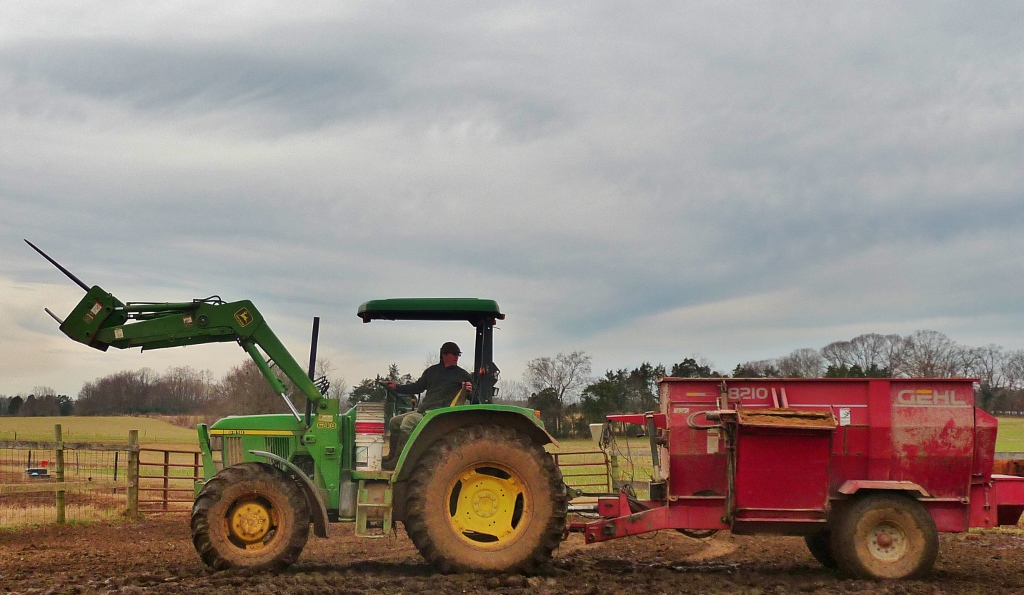 To keep up with so many cattle, Robert must carefully manage his feeding program to ensure that he has adequate pasture and hay available to the cattle throughout the year. Because each set of cattle on his farm has a unique purpose, Robert must tailor his feeding and management to suit the needs of each particular group. His brood cows in his cow-calf herd need enough energy and protein from feed to produce milk for their calves from birth until weaning. The calves, in turn, need to grow steadily before and after weaning so that they will perform well at a finishing operation later in life and provide high-quality beef for consumers. 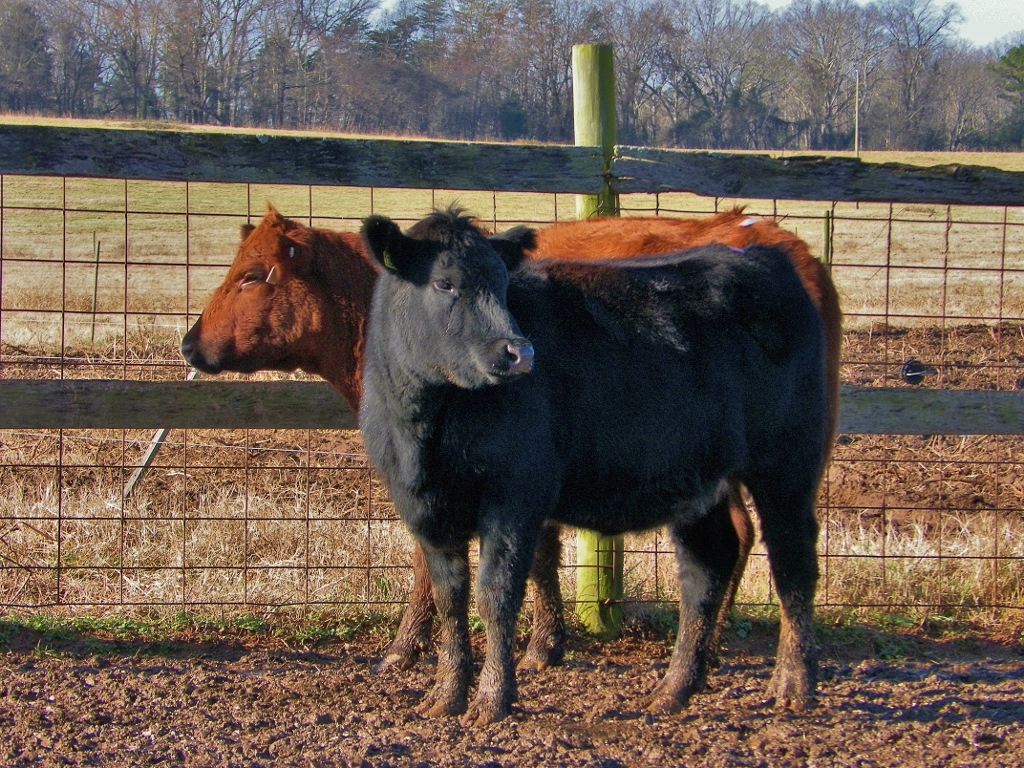 However, the young female calves in the heifer development herd require a different approach. Unlike their counterparts that will not remain in a herd for many years and must instead reach a robust “finished” weight in a timely fashion, the heifers need to grow at a more moderate pace. The young heifers must build bone, fat, and muscle tissue at a rate that promotes longevity and sound reproductive traits in preparation for a future career living on pasture and raising their own calves on a cow-calf breeding operation. To meet this goal, the heifers are run on pasture and receive a daily ration of silage, commodity feeds, hay and grain to grow and mature in preparation for breeding. Robert periodically weighs the Cross River heifers to gauge their growth and make management decisions. 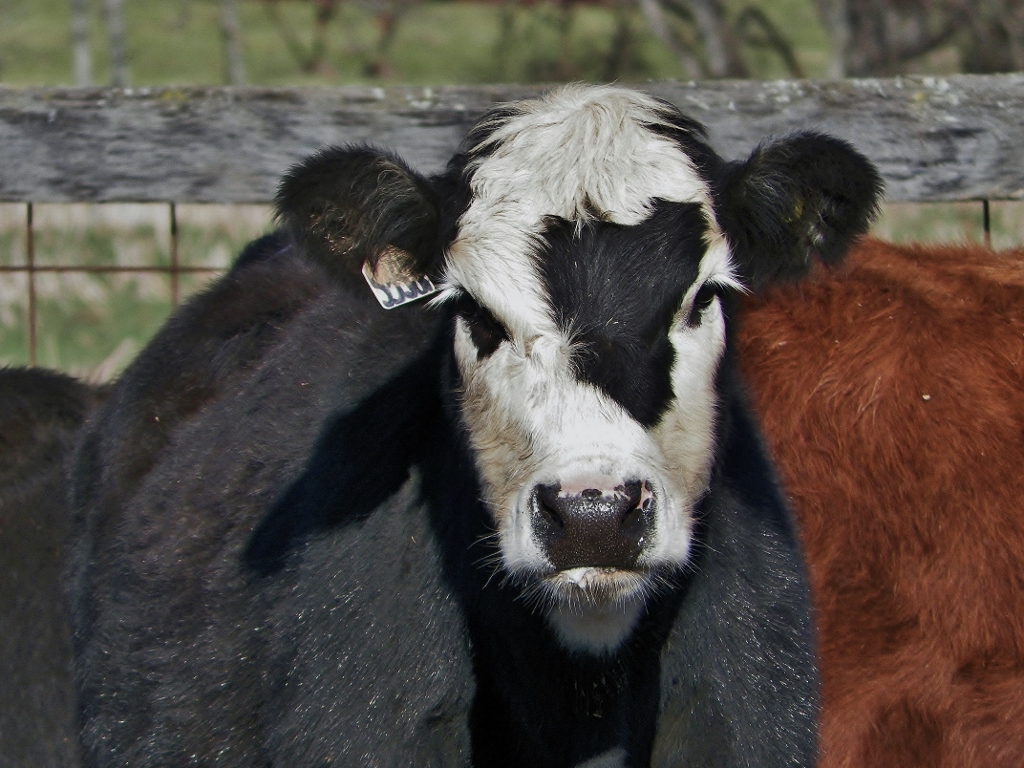 Once the heifers reach an appropriate age and body size and undergo a reproductive soundness check from a veterinarian, they are ready to be bred. Robert Harper and the rest of his fellow cattle producers in Virginia have the option to use a live bull for breeding or rely on artificial insemination. Both options follow the natural cycle for cattle reproduction, allowing females to produce one calf each year as they would do if left to their own devices. After breeding, cows remain pregnant for nine months before calving, and the calf nurses the cow on pasture for several months before it is weaned. 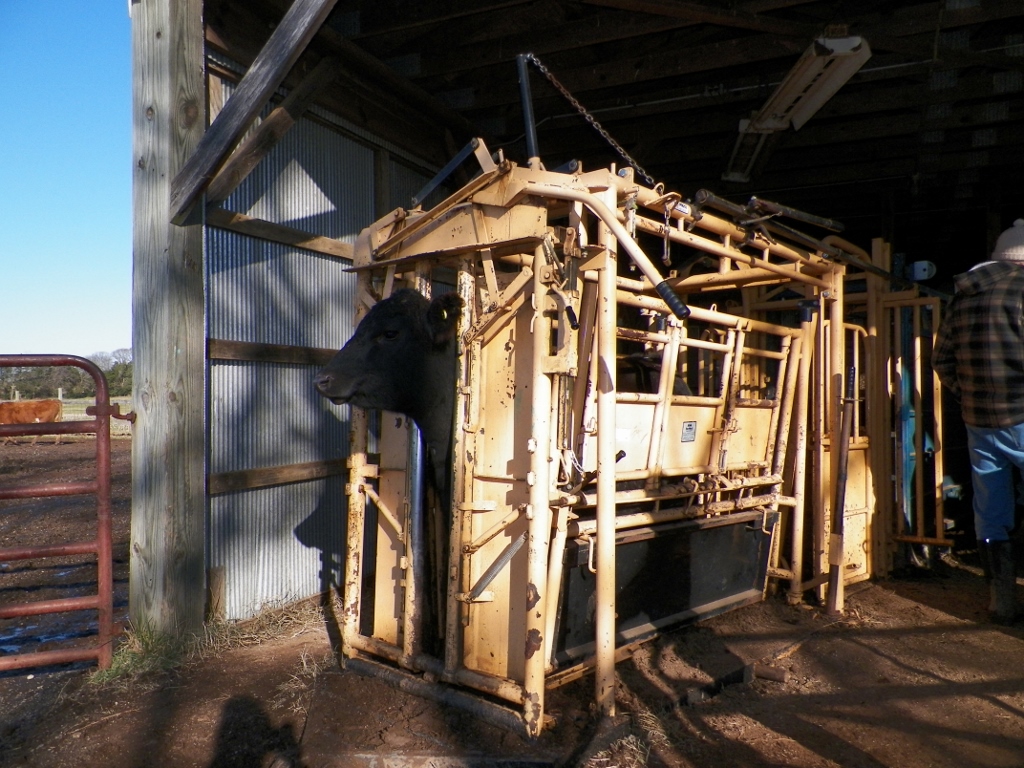 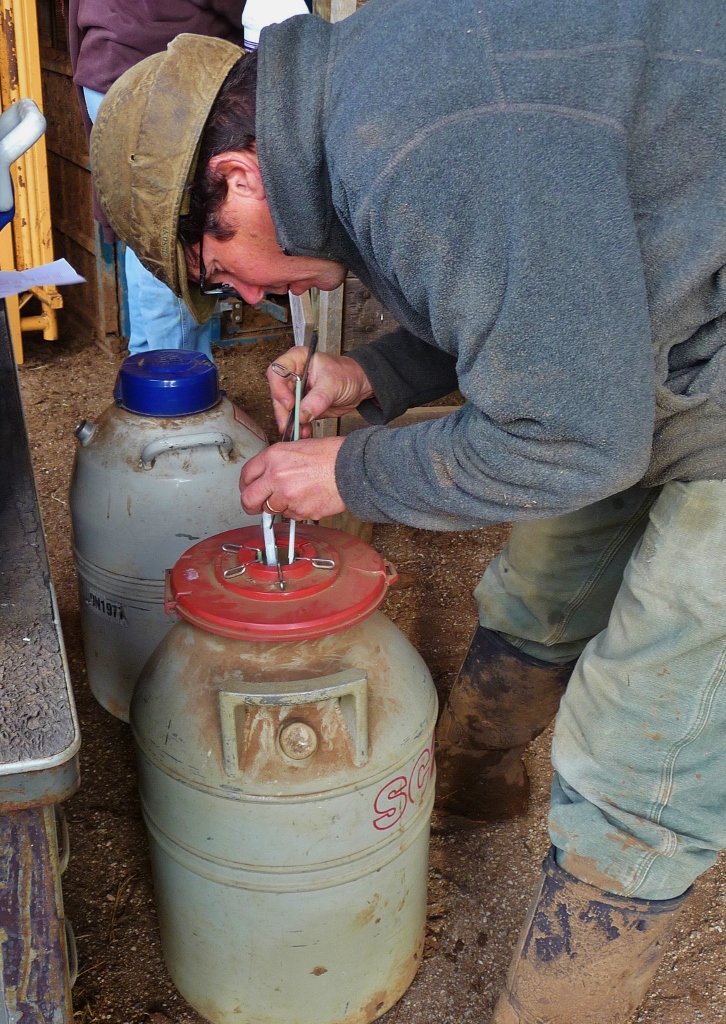 Unlike most horses and sheep which only can be bred during certain seasons, cattle cycle naturally throughout the entire year. However, instead of leaving the bull with the herd full-time and allowing heifers and cows to get pregnant and calve sporadically, producers aim to confine calving to a single season, often the fall, so that calves within a herd are all of approximately the same age and can receive the same health treatments such as vaccinations at the same time. This practice reduces stress on the animals by limiting the number of times that the herd must be brought in close proximity to humans for handling. For these reasons, Robert and the Amelia Area Cattlemen choose to breed the heifers at Cross River in December so that they will calve during the following fall season. To ensure that the animals can all be bred around the same time, they follow a heat synchronization program that causes all of the heifers to cycle on the same schedule. Once the group of heifers collectively comes into heat, they are bred. This herd is first bred using artificial insemination. This advanced, well-studied reproductive method puts little stress on the heifers and allows herd managers to bring cutting-edge genetics into the herd from bulls all over the country.

The heifers at Cross River wear heat detection patches. When the silver surface of the patch is rubbed off, the heifer is ready to be bred.

If a producer wants to use a live bull, he or she will not have to spend time synchronizing cow and heifer cycles or watching animals for signs of heat—the bull takes on this job himself. However, a locally-purchased bull’s genetic traits may not always be predictable, and the producer will need to rotate a new bull into the herd every few years to ensure that the quality of the herd and its collective genetic potential continue to progress. If producers choose instead to buy units of semen from a company that offers a catalog of bulls available for artificial insemination, they can select semen from bulls with well-documented performance traits that match their goals to improve traits like mothering ability, meat quality, animal build, or a plethora of other factors. 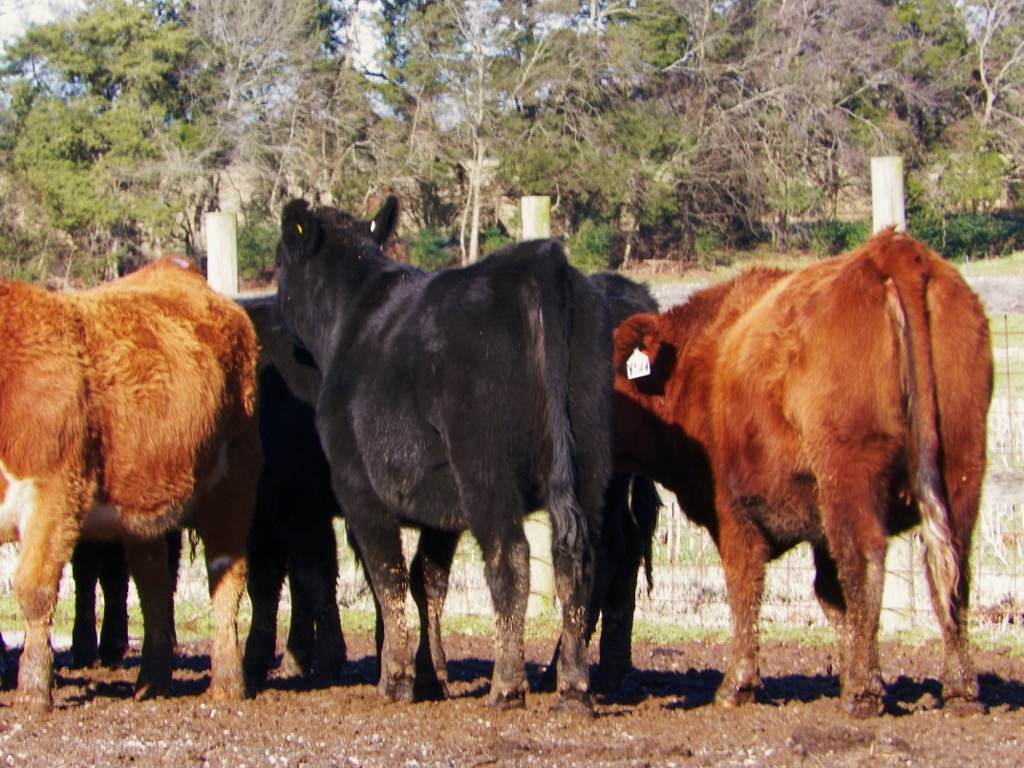 Bulls that are selected for use in an artificial insemination program are considered the “top of the line” in the industry and are subject to extensive performance testing and offspring data collection. Hence, producers like Robert Harper and members of the Amelia Area Cattlemen who choose to breed via artificial insemination have the means to improve their herds far more quickly and increase their genetic diversity far more easily than they could with a live bull. However, old-fashioned bulls still have their place and there are still many high-quality bulls sold locally that may never be featured in a semen company catalog. These animals are useful even to a herd that relies on artificial insemination, as not every heifer will successfully conceive through this means. Hence, the “cleanup bull” is turned out with the artificially-inseminated heifers so those that do not “catch,” or get pregnant, come back into heat and have the opportunity to get bred by the bull. 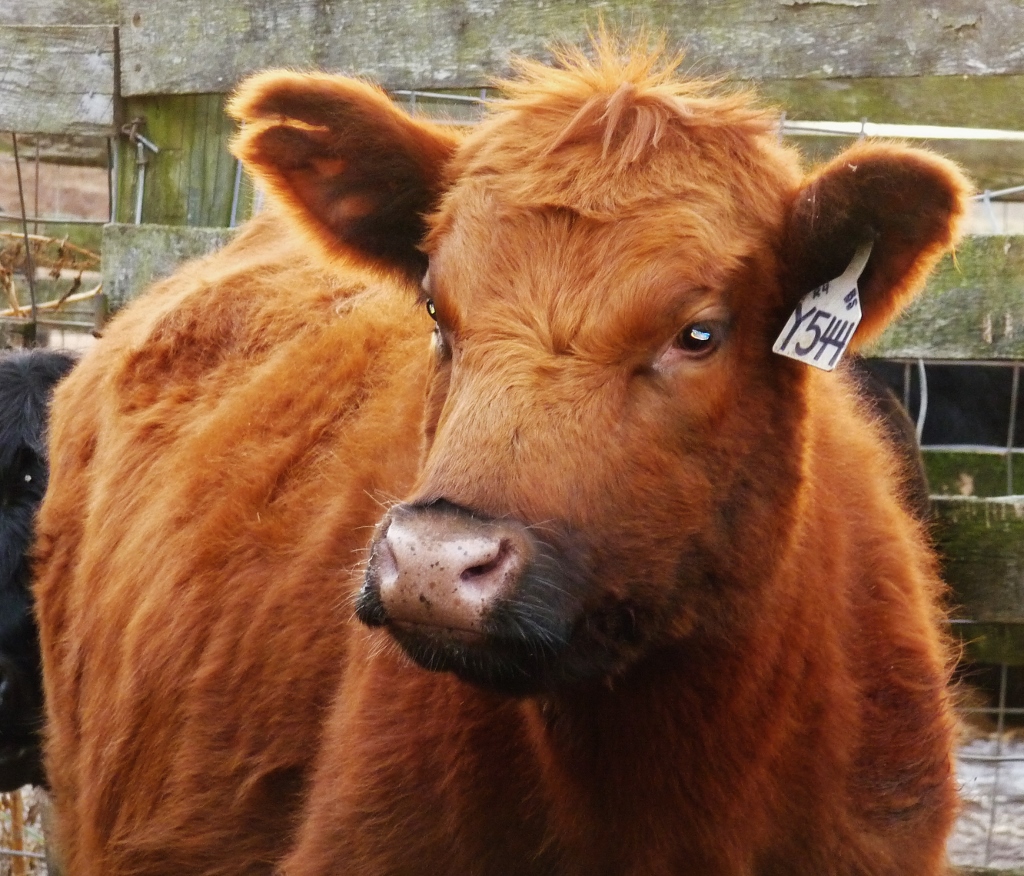 Like many producers, Robert likes to stay on top of the curve and adopt progressive practices that improve the health, performance, and longevity of his animals and the animals he custom-raises for fellow cattlemen across the region. His creative edge has allowed him to increase the scope of his operation over the years, but anyone who visits the Cross River Farms partnership at Dungeness can easily sense that Robert’s passion for working hard to raise high-quality cattle has been the ultimate force driving his success. 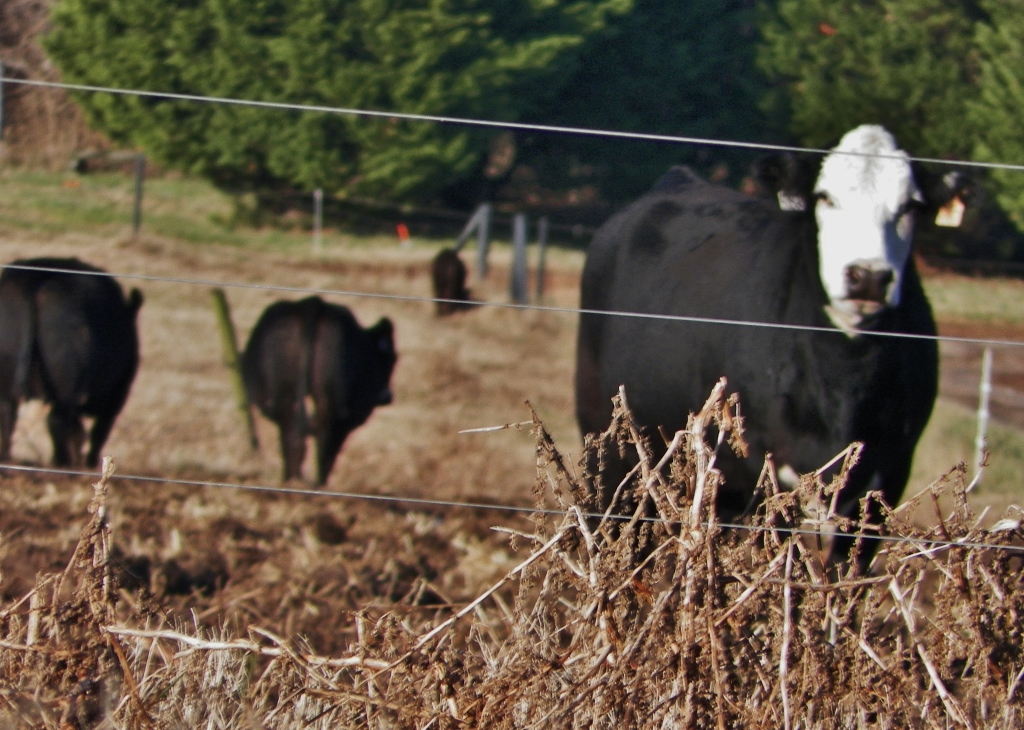 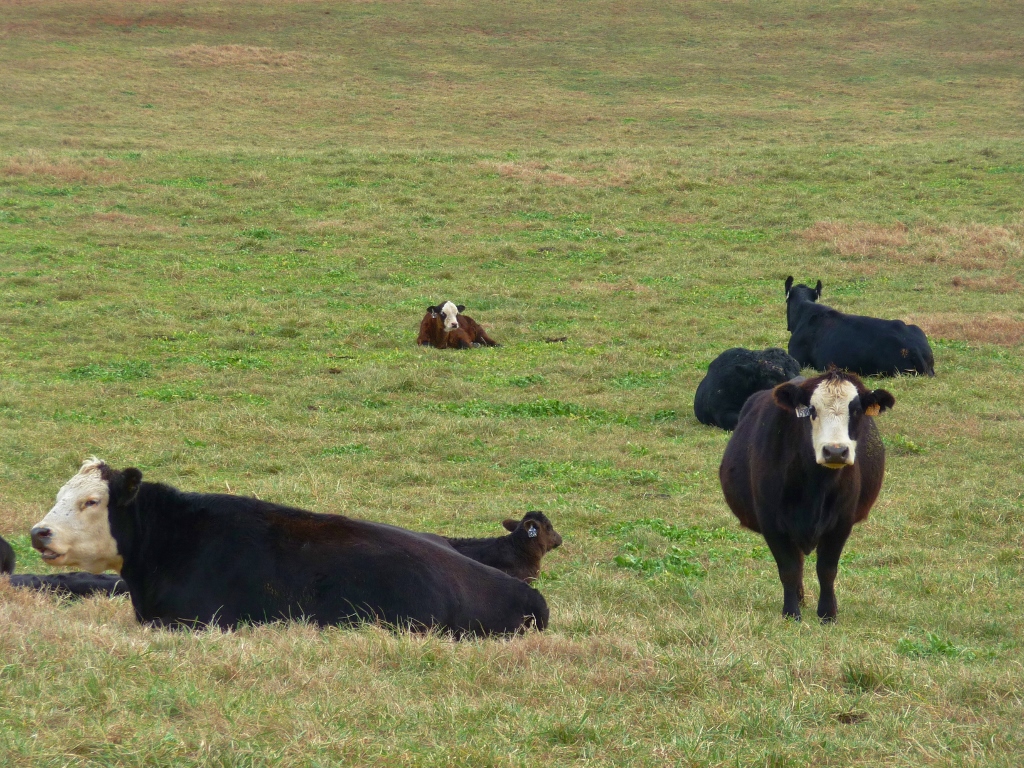 Getting Started in the Cattle Business in Virginia

Artificial Insemination vs Natural Bull Service-Where are the Economic Benefits?