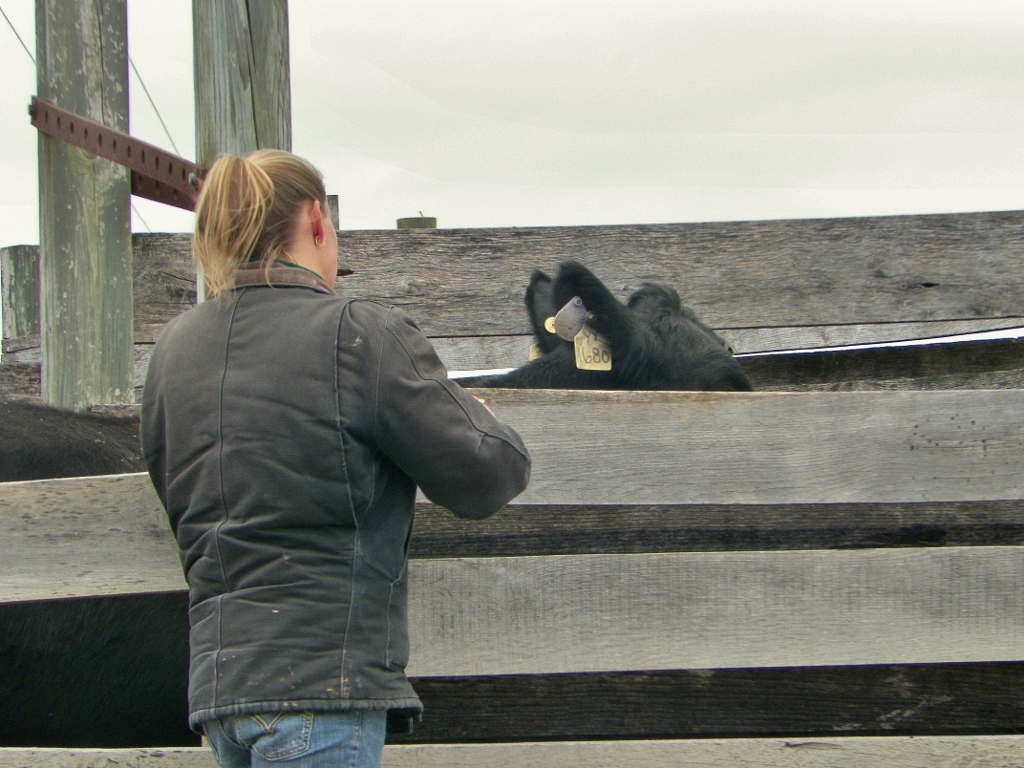 Jennifer is more commonly known as the agriculture agent for Virginia Cooperative Extension in Buckingham County and has become a leader in animal science and cattle industry programs both within her county and across the state. However, she has taken on a particularly important role as a proponent of low-stress cattle handling methods that improve animal welfare and prevent losses associated with poor handling practices. Virginia is home to many top-notch cattle producers. Some have innate cow-reading skills and have unwittingly practiced low-stress methods for years; some have learned and adopted low-stress methods later in life. The rest employ conventional methods, which is where Jennifer’s work comes in. 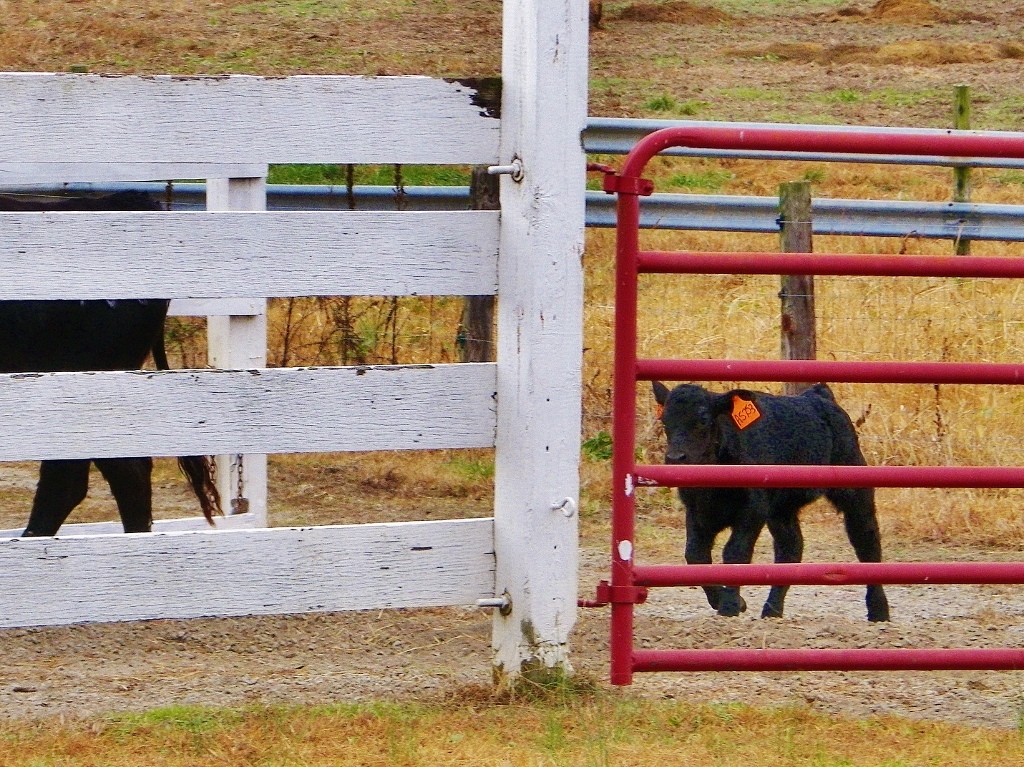 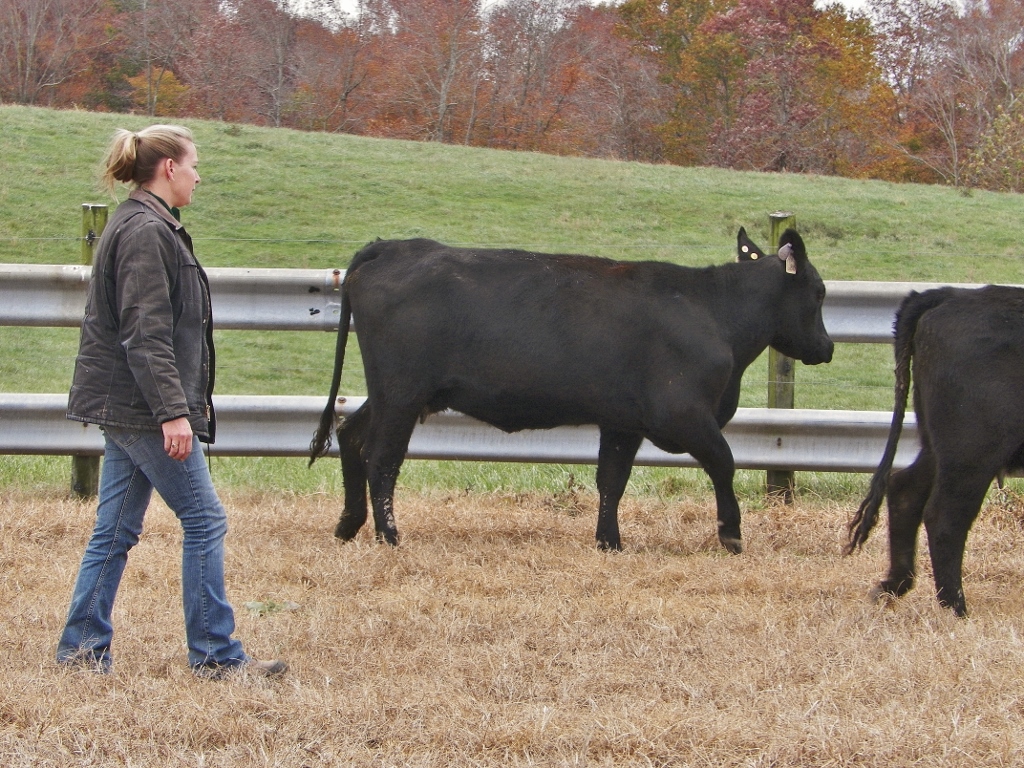 Because cattle are prey animals, they choose to maintain a large area of personal space. When a person enters this “flight zone,” animals feel pressure to move and restore their personal space. A skittish or untrained animal may have a flight zone extending several hundred feet out from its body. Over time, after repeated positive experiences with humans, this zone will become smaller and animals will tolerate closer distances to humans. The reverse is true if they encounter negative experiences. The dairy cow presents an example of an animal with a very small flight zone. Because she is handled daily and usually in a positive manner, her flight zone may only extend a few feet from her body. Some dairy cows may even allow themselves to be touched. Nonetheless, when a person steps into the flight zone of a beef animal, they apply pressure that causes the animal to move. When they step out of the flight zone, they release the pressure on the animal and it may no longer feel the need to move away. 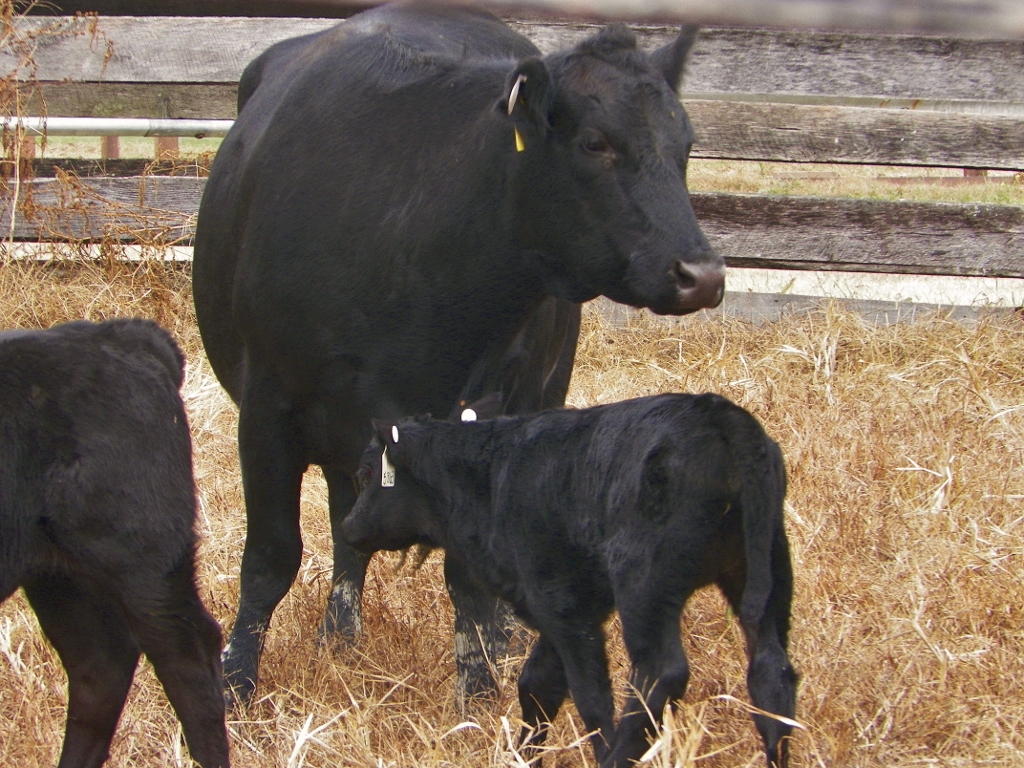 As a rule, brood cows and their calves in Virginia spend their days enjoying pasture and hay. This production system for cow-calf operations is highly cost-effective and makes use of the state’s abundant forage. Producers are nearby daily to check on the herd, move the animals to fresh pasture, or bring in feed or hay. Cattle become accustomed to these routines. However, calves and cows occasionally need to be brought into direct proximity to humans in order to receive routine care such as vaccinations, parasite controls, tagging, reproductive soundness exams, pregnancy checks, and ultimately weaning, the primary cause of stress in a cow-calf operation. The only way to perform these activities safely is to bring the cattle into a handling facility, creating opportunities for stress if the cattle are moved too quickly or exposed to loud noises, fast-moving objects, or people encroaching too quickly or aggressively on the “flight zone.” 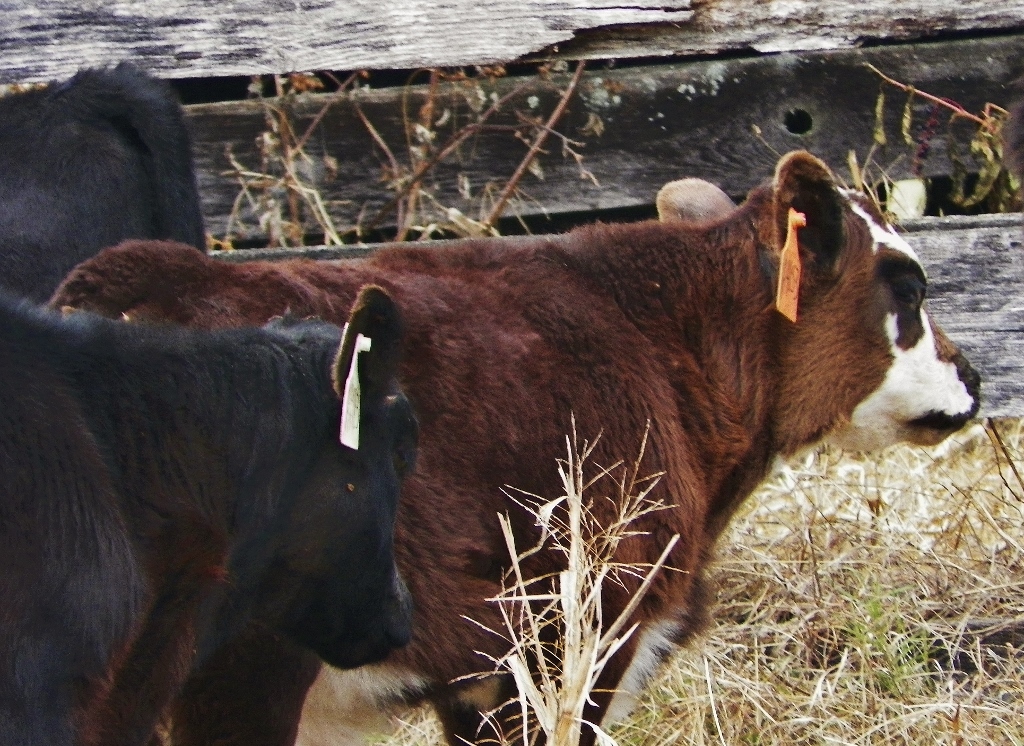 Conventional handlers tend to rely on vocal encouragement, arm-waving, and applying pressure from the back of the group in order to move animals from one pen to another or from a pen to the chute, where cattle are restrained briefly for treatment. Low-stress handling methods employ minimal noise, movement, and arm-waving. Handling methods matter during tasks such as emptying pens, where startled or stressed herds may continually circle past an open gate and frustrate handlers who wish to push them forward through it. A low-stress handler can accomplish this task more quickly by working from the front of the herd and briefly training animals to walk calmly or stop moving using pressure-and-release movements into and out of the flight zone. Once animals understand that the handler will remove the flight zone pressure when they step in the right direction, the handler can stand in one place off to the side of the group and direct animals through the gate calmly and efficiently. The same applies to moving cattle from a pen to an aisle or chute; a worked-up herd will feel forced when pushed towards narrow space. A calm animal may willingly choose to enter an aisle or alley when pressure is applied appropriately and the animal naturally chooses to step away from the pressure. 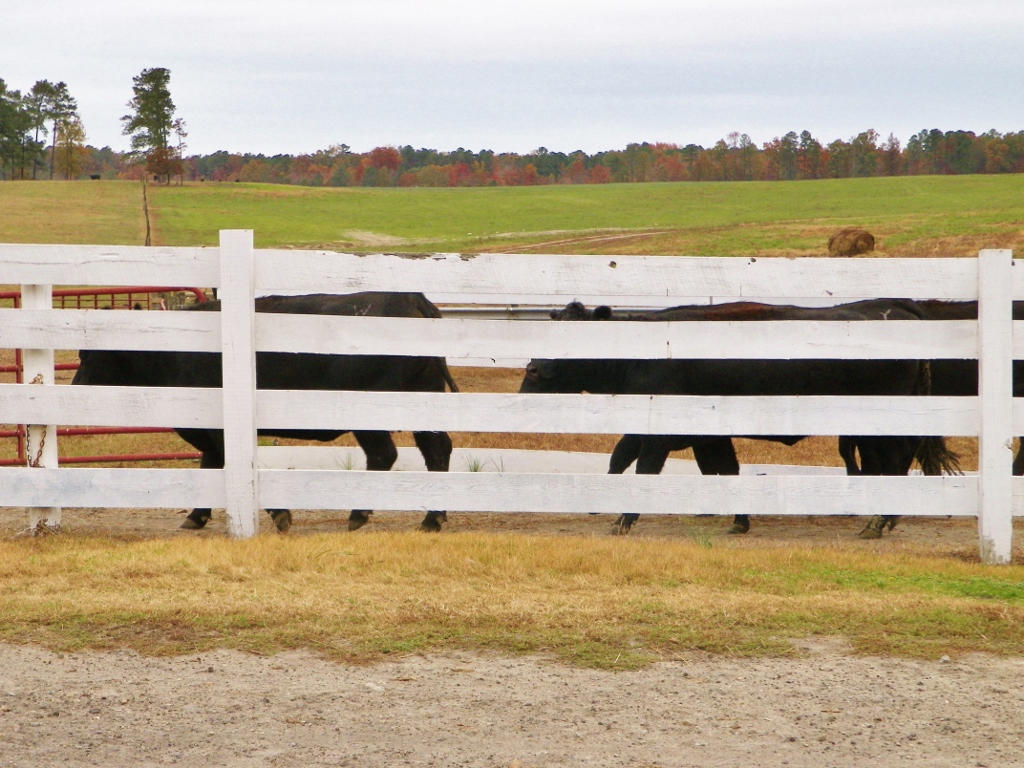 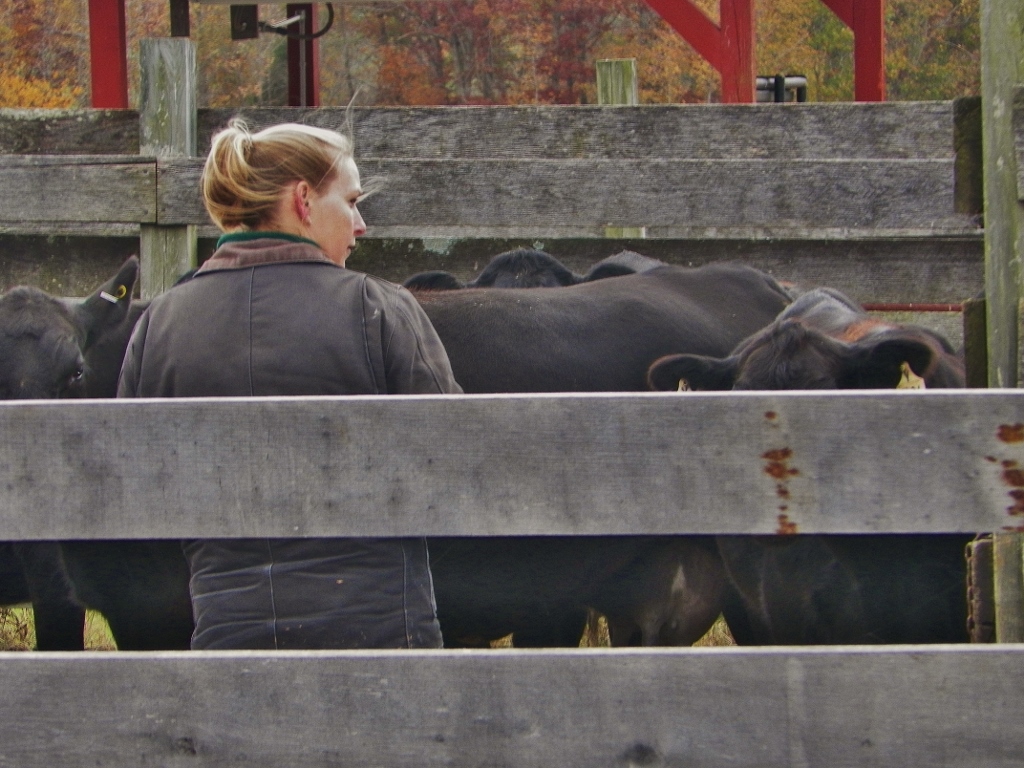 Over the past decade, low-stress handling has gained popularity and farmers throughout Virginia have attended educational sessions to become more adept at working with cattle in accordance with their instincts. Two 2013 events sponsored by Virginia Cooperative Extension featuring nationally-recognized cattle handling experts drew several hundred attendees. Virginia producers who become certified in the “Beef Quality Assurance” industry program attend educational recertification courses which emphasize low-stress handling as a key component of high-quality beef cattle production.  Extension agents, university specialists, and veterinarians across the state support and facilitate these efforts. In particular, Jennifer Ligon has undertaken research to quantify the benefits of low-stress handling in comparison to conventional handling methods on cow-calf operations. In several locations, she compares the behavior of animals that encounter both handling methods during various tasks.  She plans to evaluate impacts of stress, including weight loss during the weaning process. Jennifer also works closely with local cattlemen and organizes educational efforts that demonstrate low-stress handling methods. 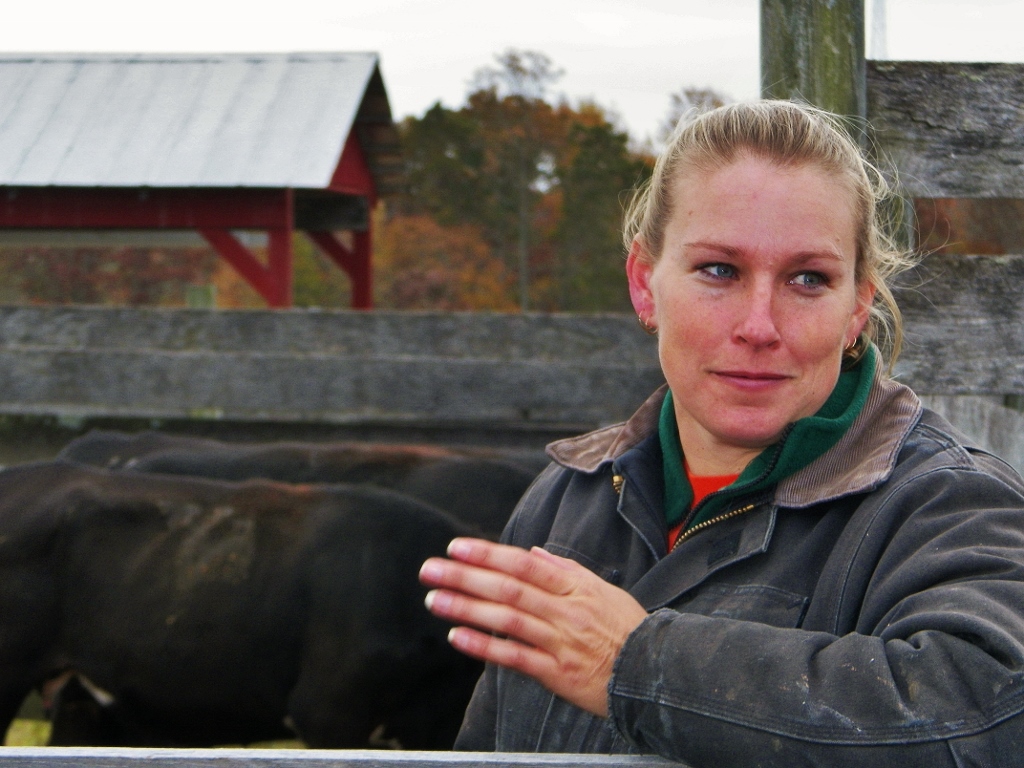 Many consumers are concerned with the practices that are used to produce food. They can rest assured that low-stress handling methods promote calmer, happier cattle that are treated responsibly at all times.  Low-stress handling has the potential to benefit cows, raise consumer confidence, keep handlers safe, and cut losses to improve profitability across Virginia’s cattle operations. With the help of industry leaders and agents like Jennifer, more producers are adopting these practices and reaping the benefits. 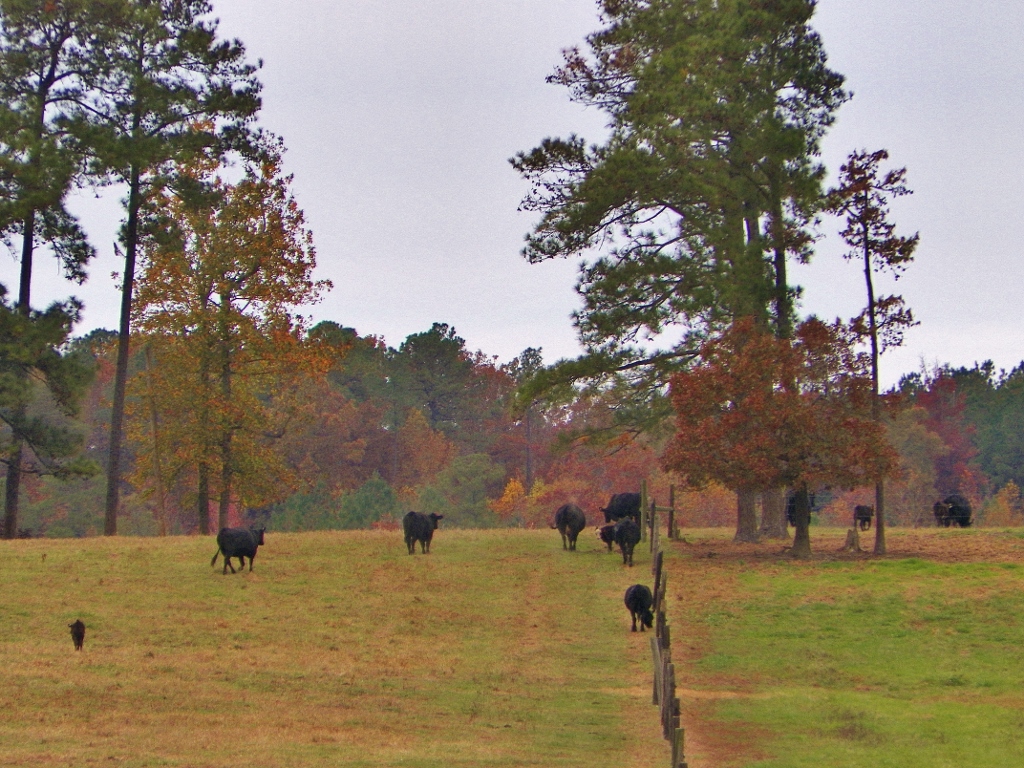 Getting Started in the Cattle Business in VA