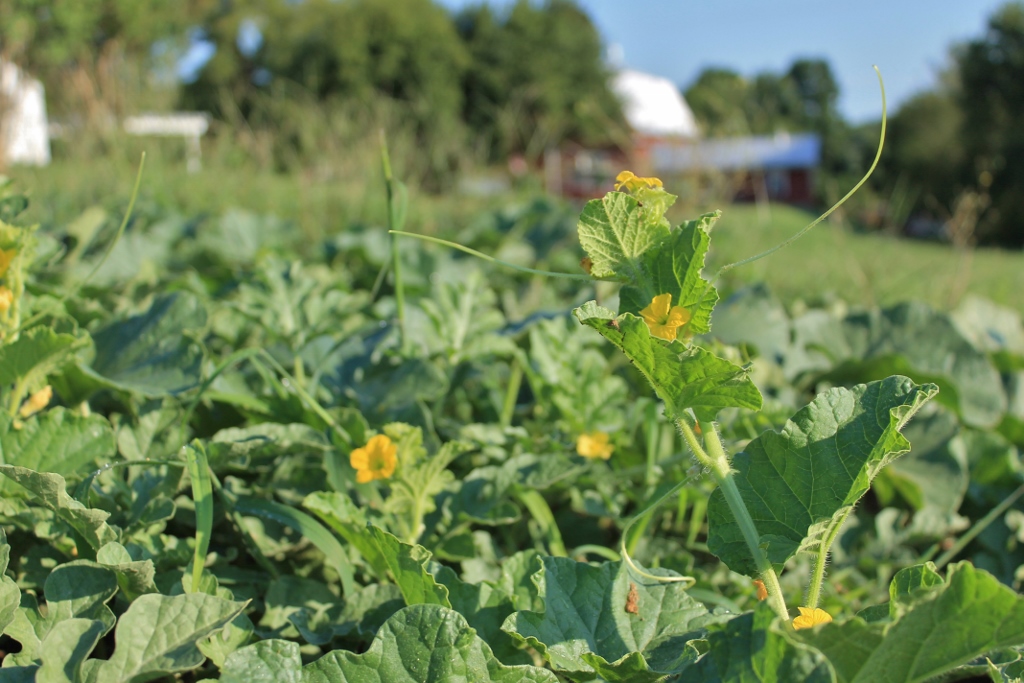 This month’s post is a bit of a departure from our usual “Meet the Farmer” stories–for February, we are sharing some lessons we learned from our experiences managing the 2015 Extension demonstration garden in Amelia County. The following narrative was first shared in our newspaper column in the Amelia Bulletin Monitor. -Laura Siegle

The garden began in 2013 as a 1,200 square foot vegetable garden at the historic Raleigh Parish Glebe in Amelia Court House, and it was used for several tours and demonstrations. We enlarged the garden to 3,000 square feet in 2014 and expanded efforts to use it for youth, agriculture, and healthy lifestyle education. Following those efforts, we created a documentary video and featured it on the blog last year. 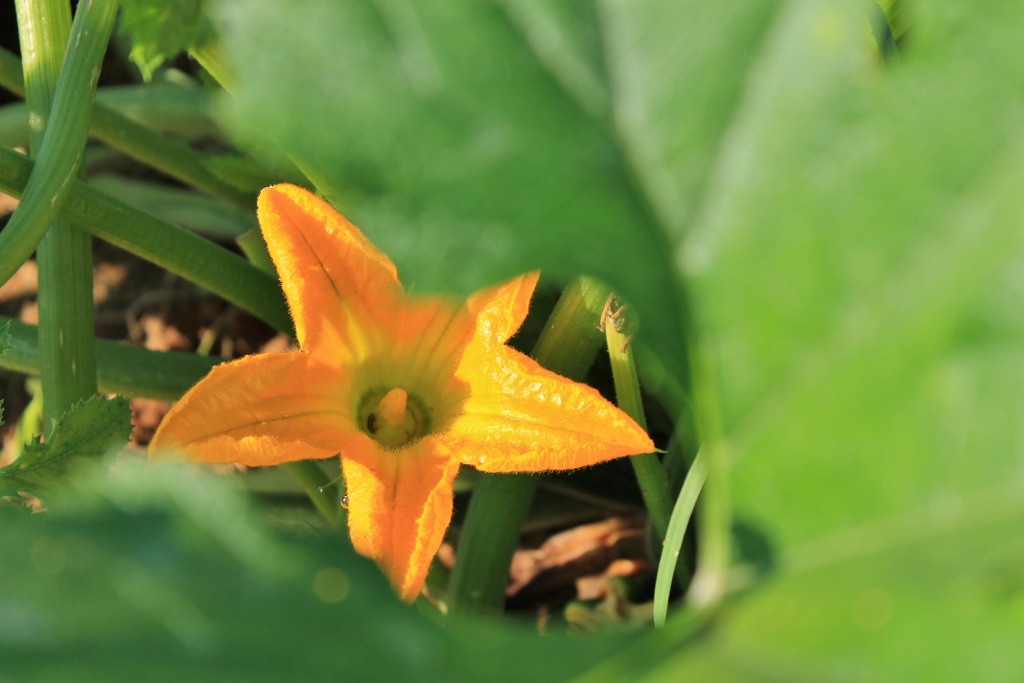 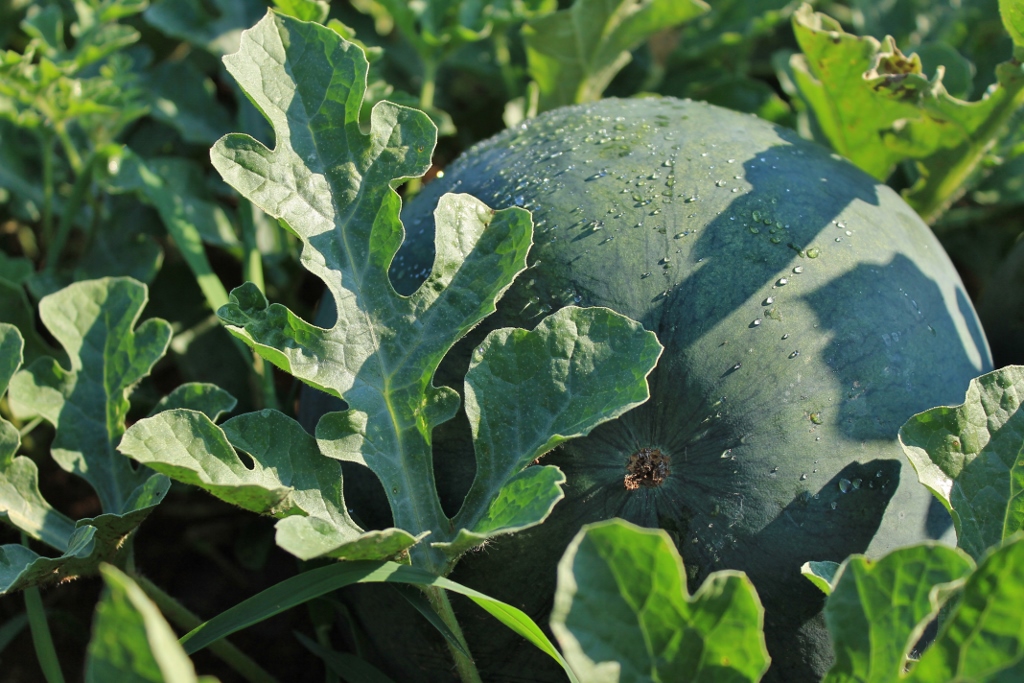 For the third year in a row, we planted vegetables at the 2015 Extension demonstration garden at the Glebe for the purpose of tours and education, and along the way, we tracked our observations in hopes of sharing the results with gardeners who may benefit from our experiences. In fall of 2014, we planted a wheat cover crop which we killed in the spring with mowing and tillage prior to planting time. This cover crop protected the soil during winter rains, increased organic matter, returned nutrients when it was incorporated into the soil with a tiller, and even seemed to choke out some weeds. However, even after it was mowed, it was tough on the tiller and required us to run through it twice to adequately prepare the seedbed. We then planted snap beans, lima beans, patty pan squash, sweet corn, watermelons, cantaloupe, and several heirloom tomato varieties. 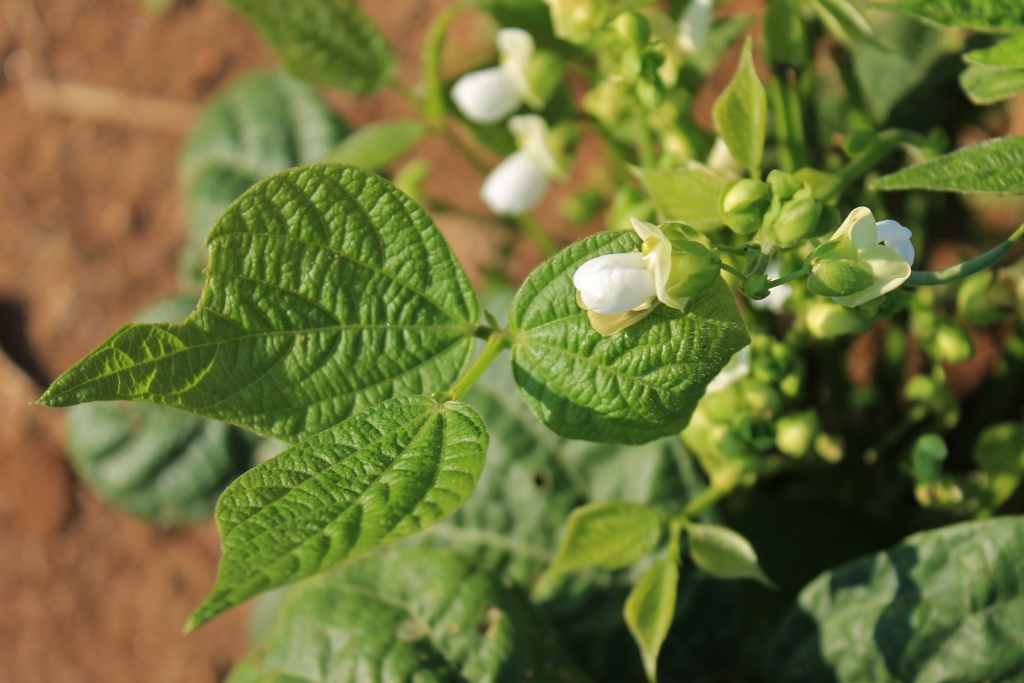 Insect pressure this year was minimal, and we observed a number of beneficial insects settling in our plants. Bean leaf beetles and various caterpillars fed on foliage, but neither caused enough damage to warrant treatment. In 2014, we picked bean leaf beetles off bean seedlings until they grew large enough to withstand damage, but that practice seemed unnecessary this year. 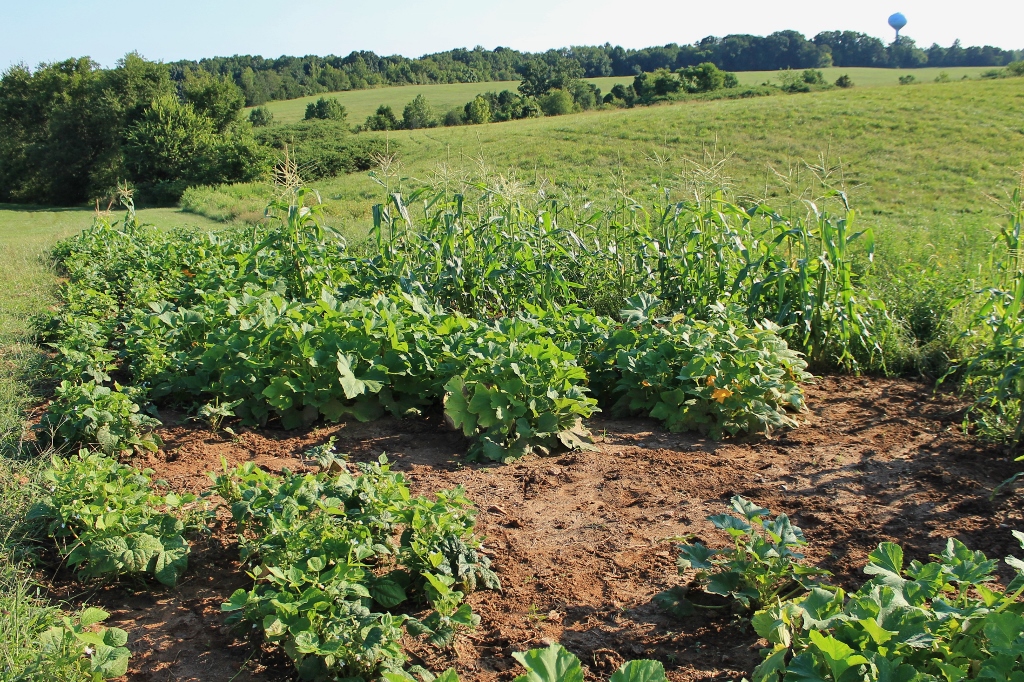 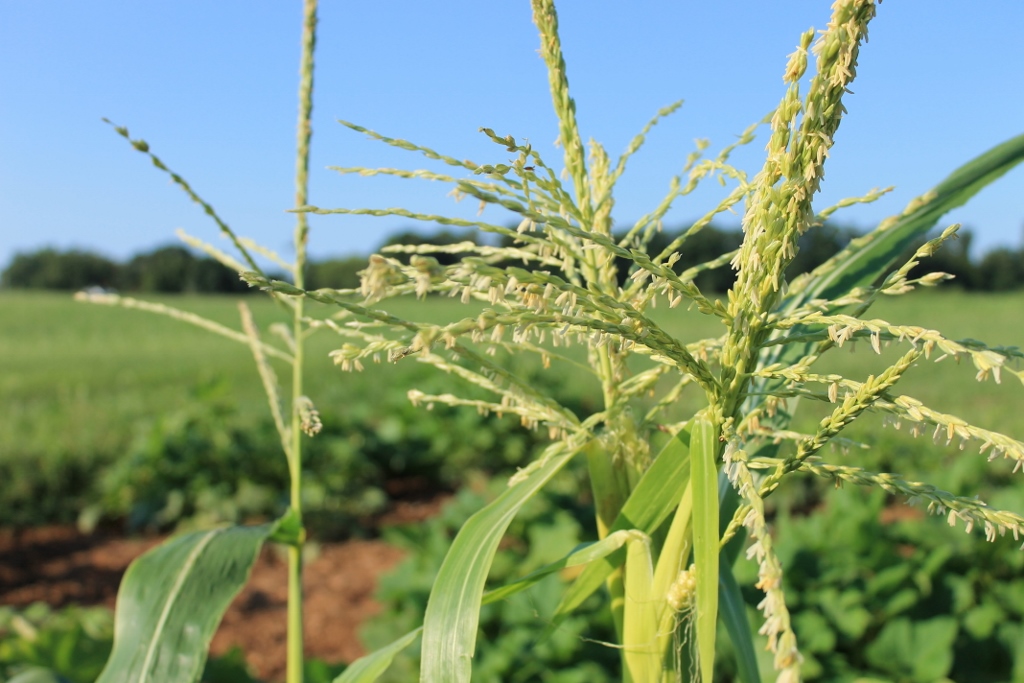 Because we could tolerate some crop losses in our garden which might not be acceptable in other scenarios and because our garden is immediately adjacent to some bee hives, we decided to forgo the use of insecticides on our plants. We observed a variety of pollinators from honey bees to bumble bees active in the garden, and insecticides pose the greatest risk to these beneficial insects during the periods when they are readily observed foraging around the garden. Like clockwork, squash bugs showed up in the garden right around the time that our pollinators began taking advantage of blossoming plants, making it difficult to find an appropriate time to use insect controls. However, the squash bug population this year seemed lower in our garden than it was last year, perhaps because we discarded the 2014 cucurbit plant residue from the garden in the winter and removed egg masses we saw on leaves this year. Both practices can be helpful, although sometimes combining these practices with the use of an insecticide can be the only way to salvage a cucurbit crop and prevent the squash bugs from transmitting wilt to the plants. 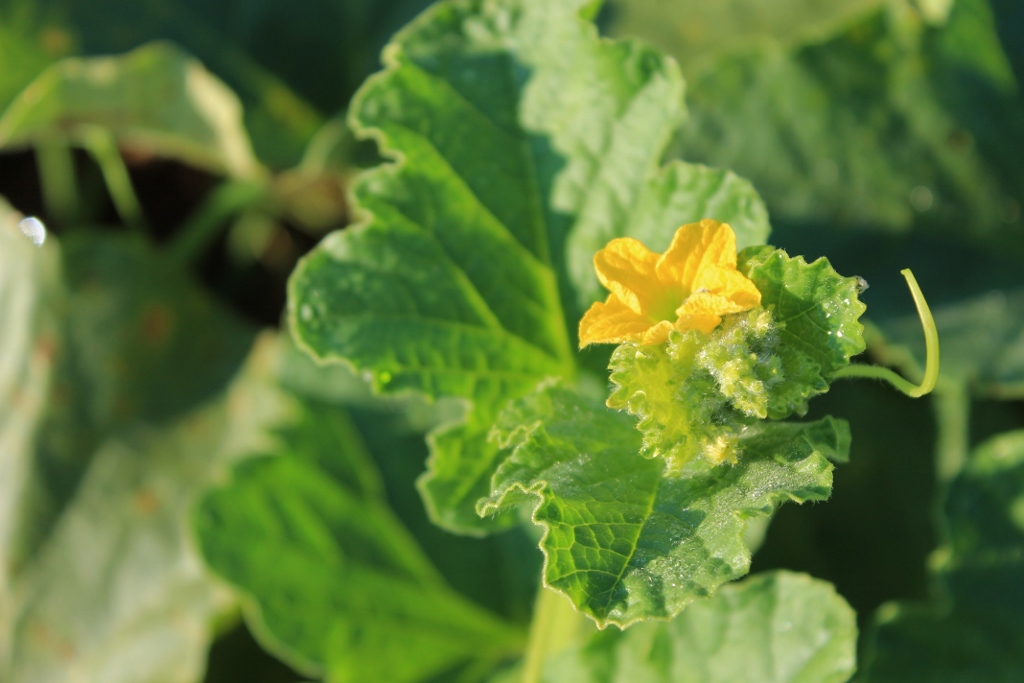 Bear in mind that controlling squash bugs and other insects chemically is a risk versus benefit decision, as you must consider the potential for extensive crop losses and pest population buildup in the garden against the risk to pollinators and beneficial insects in the vicinity. 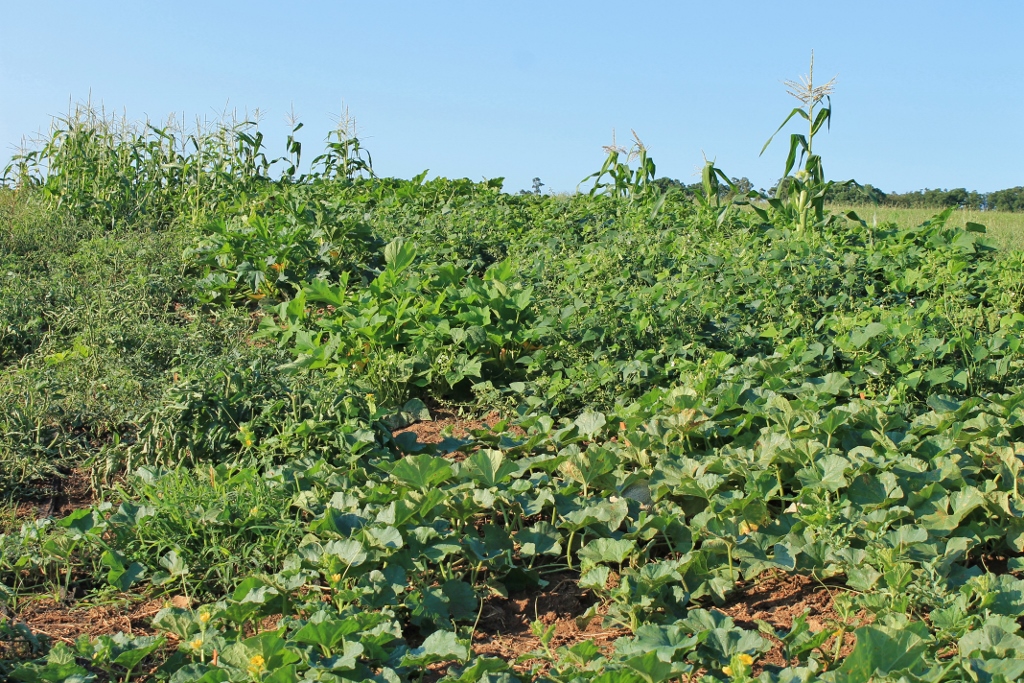 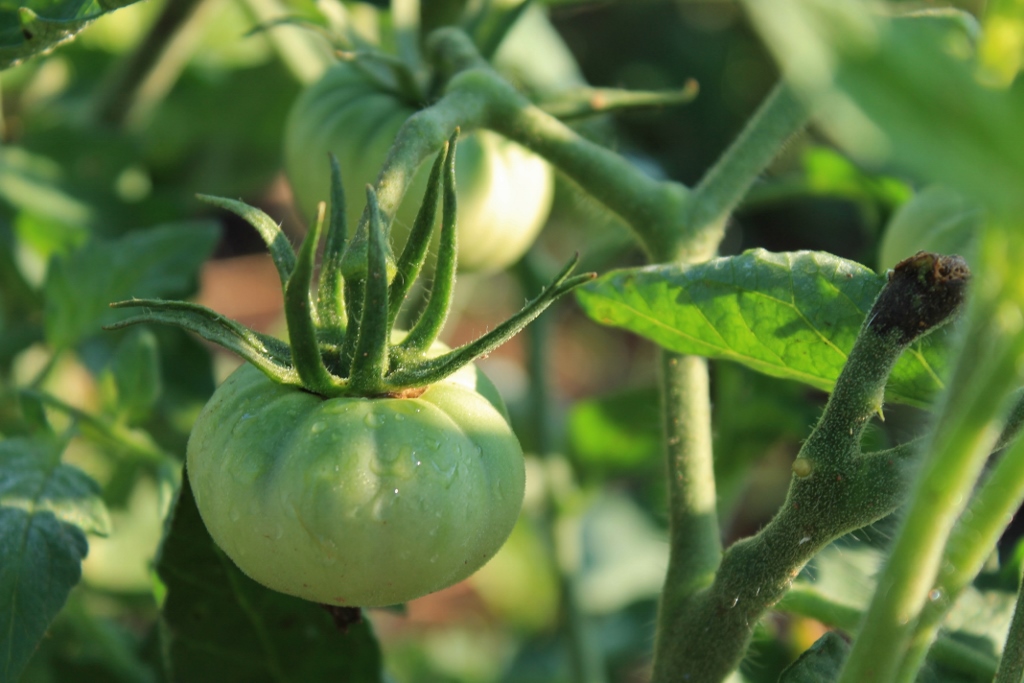 A few long bouts of dry weather we experienced in June and July helped us avoid early buildup of many of the foliar diseases that sneak in when weather stays wet. However, humidity and sequential rainy days later in the summer favored development of some foliar diseases in our cantaloupe and watermelon patch, treatable with copper and chlorothalonil. Around the middle of the season, we saw powdery mildew arrive on our squash which we treated with fair success using a copper spray. 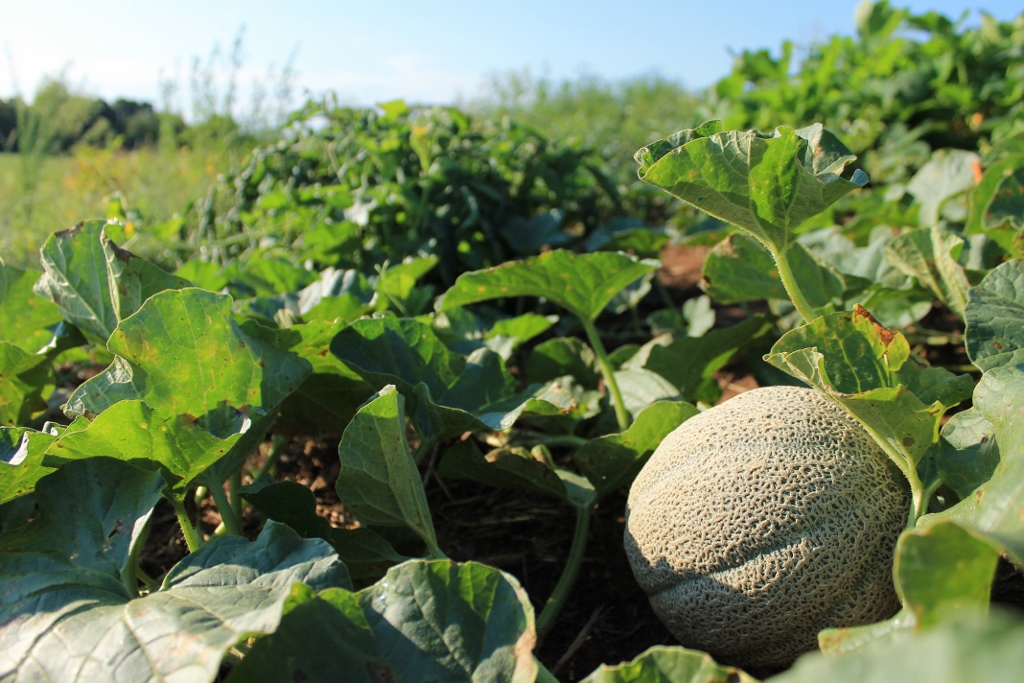 Naturally, weeds put constant pressure on the garden throughout the season. However, we judiciously hand-rouged out emerging lambsquarter and spiny pigweed before either could go to seed throughout 2014, and the results seemed to pay off in 2015 as only a few of these plants crept into the garden. We had too much bare, unused space last year where weeds easily grew, so we used shade to our advantage this year by planting as much available space as possible without planting too densely. This seemed to effectively weaken many grass seedlings. We removed weeds approximately biweekly and relied on a scuffle hoe early in the season when crabgrass seedlings were the primary concern. For larger weeds, we combined hand-weeding and hoeing. Carpetweed, spotted spurge, crabgrass, Bermuda grass, and goosegrass were the five most common weeds in the garden this year.

Many people ask about herbicides and pre-emergent control options, and I advise them to keep in mind that the pre-emergent options that are approved for vegetable gardens should only be used in places where desirable plants have already germinated and grown a few true leaves or else they, too, will be suppressed, just like the weed seeds. I have used trifluralin granules in the past for weed seed suppression. I had no experience with the organic option, corn gluten, so we applied this product to the garden as an experiment. We found that, just as stated on the label, this product did not offer long-term control comparable to trifluralin, but it did seem to keep weed seedlings from growing for a period of several weeks. We ceased using it in late summer, as we wanted the option to plant a fall crop. Remember, these pre-emergent products are designed to keep germinating seeds from growing into seedlings and should not be used in places where you are trying to germinate seeds of “good” plants. 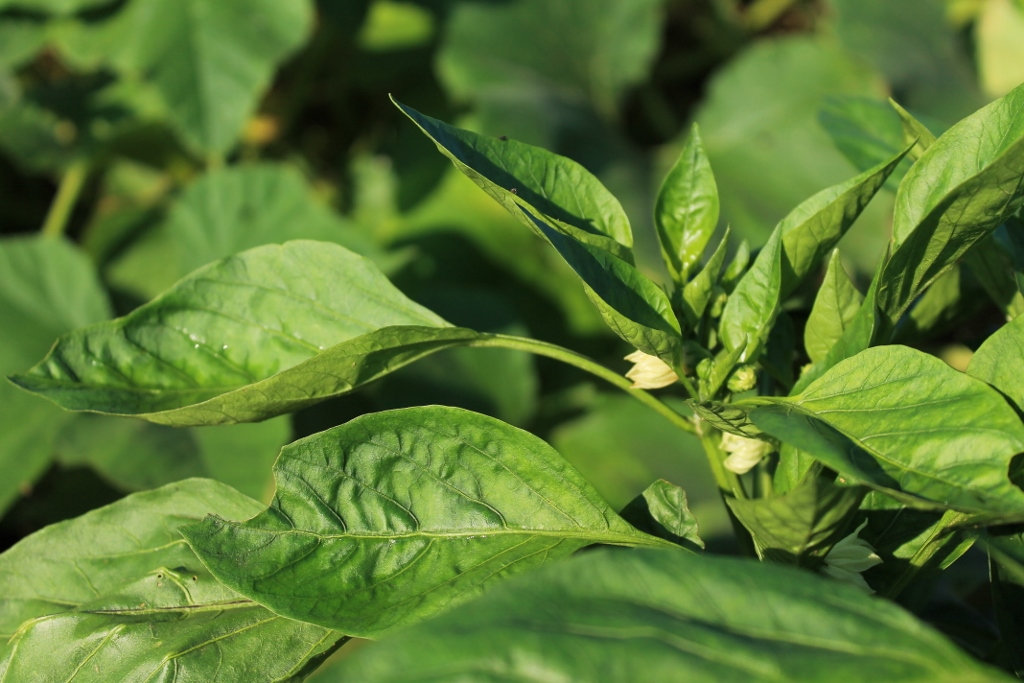 As for post-emergent herbicide sprays, we had good results spot-spraying a few trouble areas last year, but that did not seem necessary this year because our cultural controls were sufficient. Furthermore, gardeners need to realize that herbicides might selectively control grasses or broadleaf weeds or even both. Since most vegetables with the exception of corn are broadleaf plants, a broadleaf or broad-spectrum herbicide, for example, will not know the difference and can kill desirable garden plants that contact the product through drift or direct spray. Many vegetables are highly sensitive to glyphosate and other chemicals, and even organic herbicides can kill desirable plants. For these reasons, the average gardener who is not experienced with using these products and following their labels may be better off relying on tillage, hand-tools, and other cultural methods for weed control while desirable plants are in the immediate vicinity. 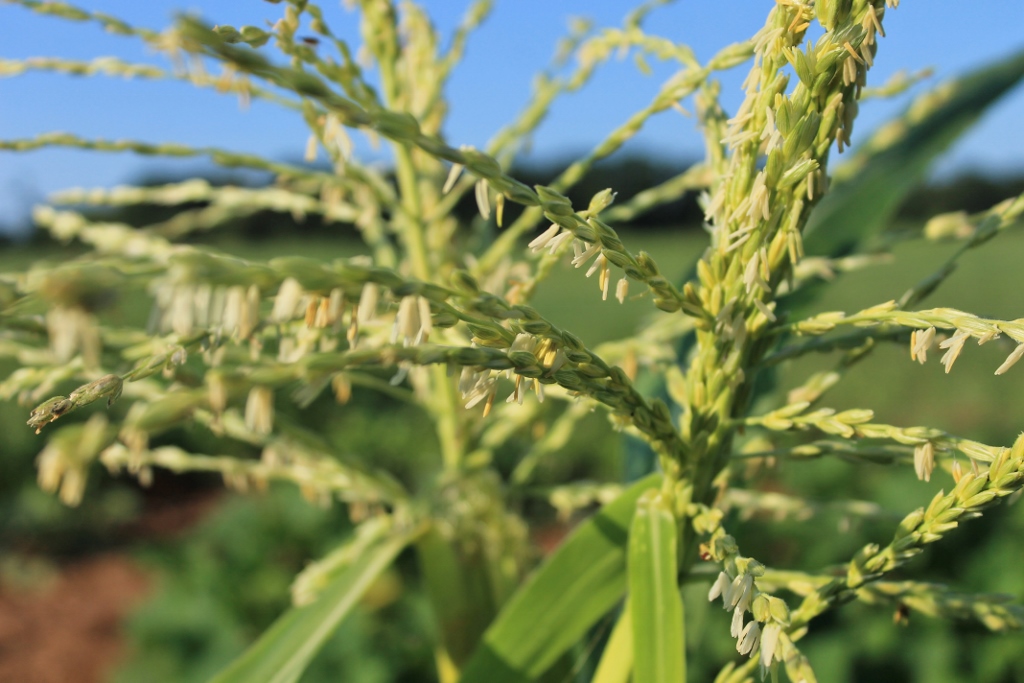 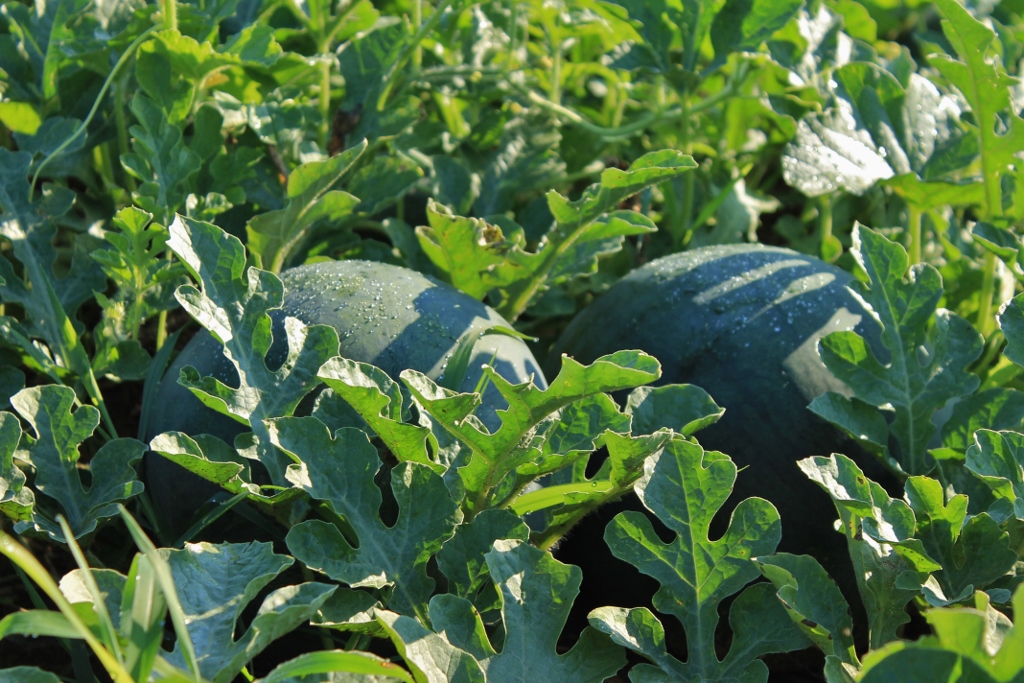 The last facet of our garden’s management that may come as a surprise is the fact that we never watered the site. Getting water to the garden required logistical gymnastics in 2013 and 2014, so for 2015, I decided that the garden would simply be a “sink or swim with what you get” affair. I expected some plants to struggle, but was surprised at the garden’s resilience. This is not necessarily the best strategy for anyone who is aiming for high yields and minimal stress on plants, and we were blessed with a favorable year for rainfall. However, our garden did quite well considering the circumstances. To make the most of this strategy, we timed planting to coincide with a period of high moisture, and we planted everything but the tomatoes from seed because we believed that the transition from a greenhouse to a dry garden might be too much of a shock for transplants to weather. We planted the tomato transplants deep, covering half of the stems, to encourage strong root systems. It seems that the beans, watermelons, and cantaloupes fared the best in the dry weather, whereas the squash experienced some wilting during the longest dry stretches.

All in all, we had an excellent garden year in a beautiful Amelia County setting. Even if you missed this year’s tour, we are sharing our experiences in hopes that they help you along in your own garden pursuits. 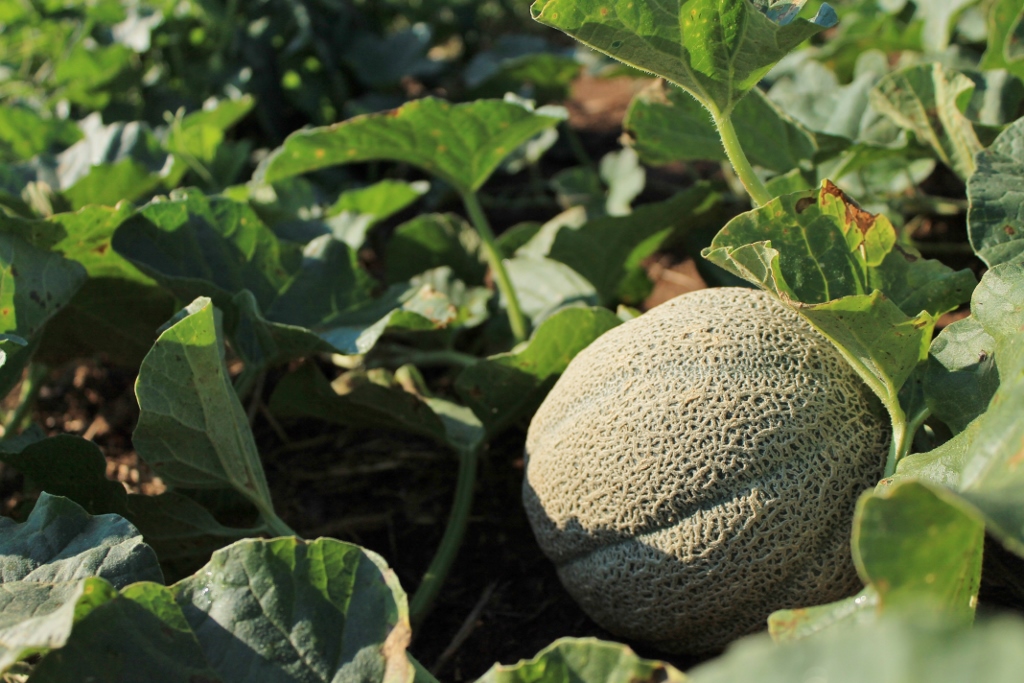 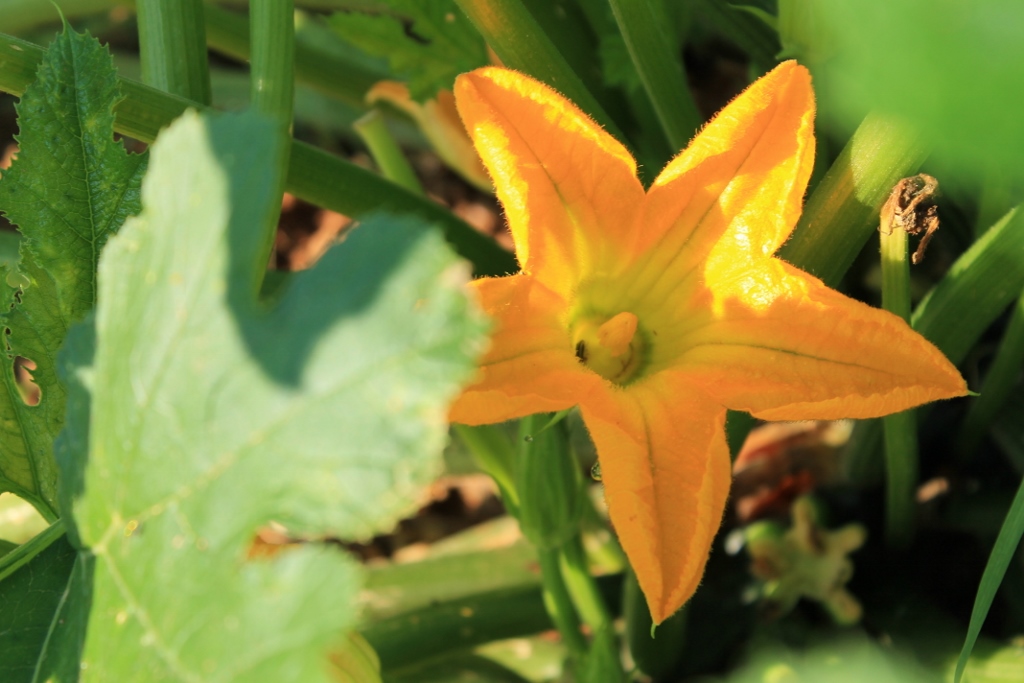 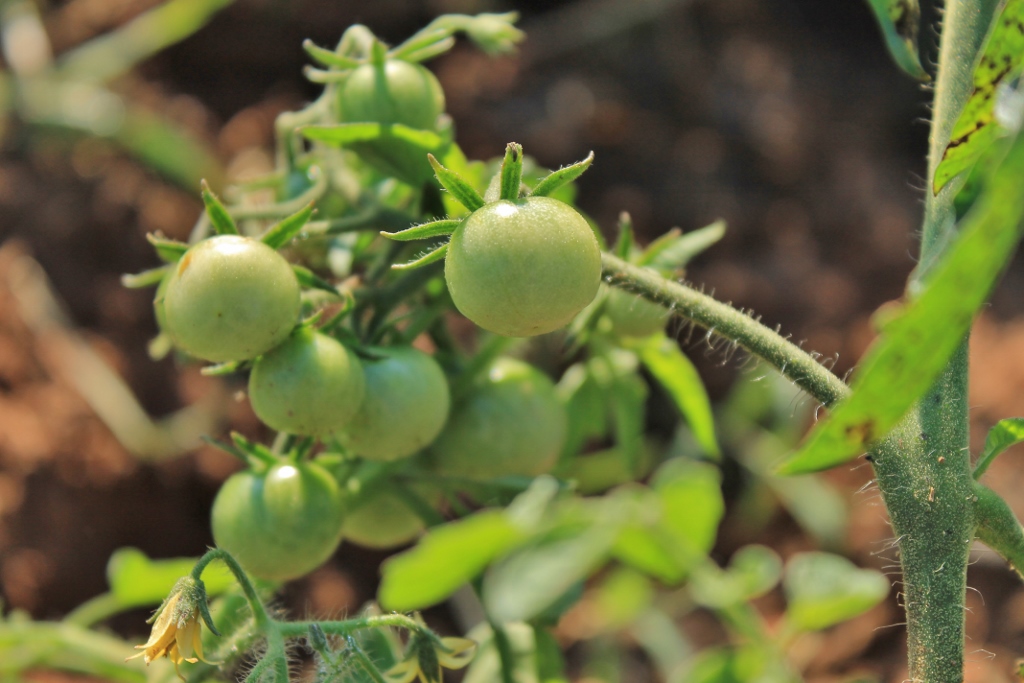