Before the cost of soybean seed jumped with the introduction of the Roundup-Ready trait, soybean was planted at much greater rates than was needed for maximum yields. Back then, seed was cheap. It only cost a few dollars to insure adequate stands – even if only 50% of those seed emerged. Today, planting extra seed is a luxury that we can no longer afford, especially if the seed includes one or more of the many seed treatments now available. Furthermore, with better planters and drills that easily handle residue and place the seed at the proper depth, we tend to get better stands. But, just how low can we go? How many seed per acre does it take to maximize yield?
Over the past 8-10 years, I’ve collected a lot of seeding rate data on different soils throughout Virginia. The main conclusion from that research was that seeding rate recommendations were too high for full-season (May-planted) soybean and barely adequate for double-cropped (late June- to July-planted) soybean. Over the past three years, I’ve also collected quite a bit of data following a barley crop (early June planted) and I feel comfortable with relatively low seeding rates for this cropping system. My current recommendations are listed below. Note that the table lists the desired final plant population in plants per acre and the seeding rate calculations (in plants per row foot) are based on 80% emergence. Your final stand may vary depending on emergence. In general, for May plantings, 80,000 plants per acre are adequate for all row widths. 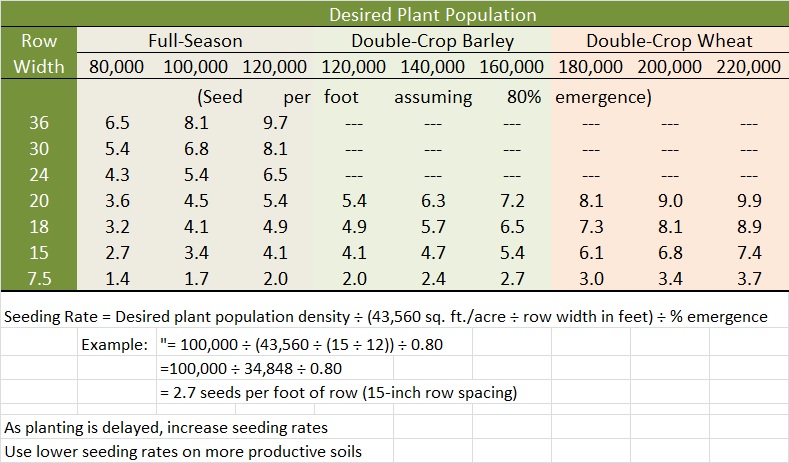 Don’t Widen Rows to Save Seed. I’ve heard talk of widening rows to save seed. It’s true that if you move back to 30 or 36” row spacing, you’ll not use as much seed. That’s because you can only crowd so many plants into a row and get a benefit. Basically, too many plants within the row are competing with each other. But, you’re losing the benefit of narrow rows, which is, once again to capture 90% or more of the sunlight by flowering and early pod development. Sure, it’s possible that in a good year on a good soil, you’ll be able to meet these requirements. But over time, it’s not likely. On the other hand, row spacing of 15 to 20 inches should provide adequate canopy if planted in May through mid-June. Keep in mind that the later you plant, the greater the benefit from narrow rows. Also, narrow rows benefit early-maturing varieties more than late maturing varieties. And, as I’ve alluded to earlier, there is less of an advantage to narrow rows on more productive soils. Therefore, some fields will likely respond more to narrow rows than others.

Here’s a good way to check and see if your row spacing is narrow enough for a particular field. This summer, when the soybean crop is in full bloom, walk your fields. As you’re walking, look into the canopy. Can you see any ground? If so, then you’re rows are not narrow enough. If you’re already planting in narrow rows, then consider raising your seeding rate. This will insure that you’re meeting the leaf area requirements.

Uniform Stands Matter. We generally think that soybeans will compensate for poor stands, wide rows, and/or gaps within rows. Soybean will compensate much more than other crops. However, I think that uniformity of stand within the row matters.  The more uniform the spacing between plants within a row, the greater the yield potential. This was shown with double-cropped soybean in research conducted in Virginia that compared a 15-inch planter with a standard drill and a drill that uniformly distributes the seed in the row (see figure below). I’ll refer to this drill as a “precision drill.” Details of the drills used are shown below. 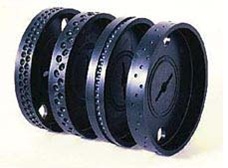 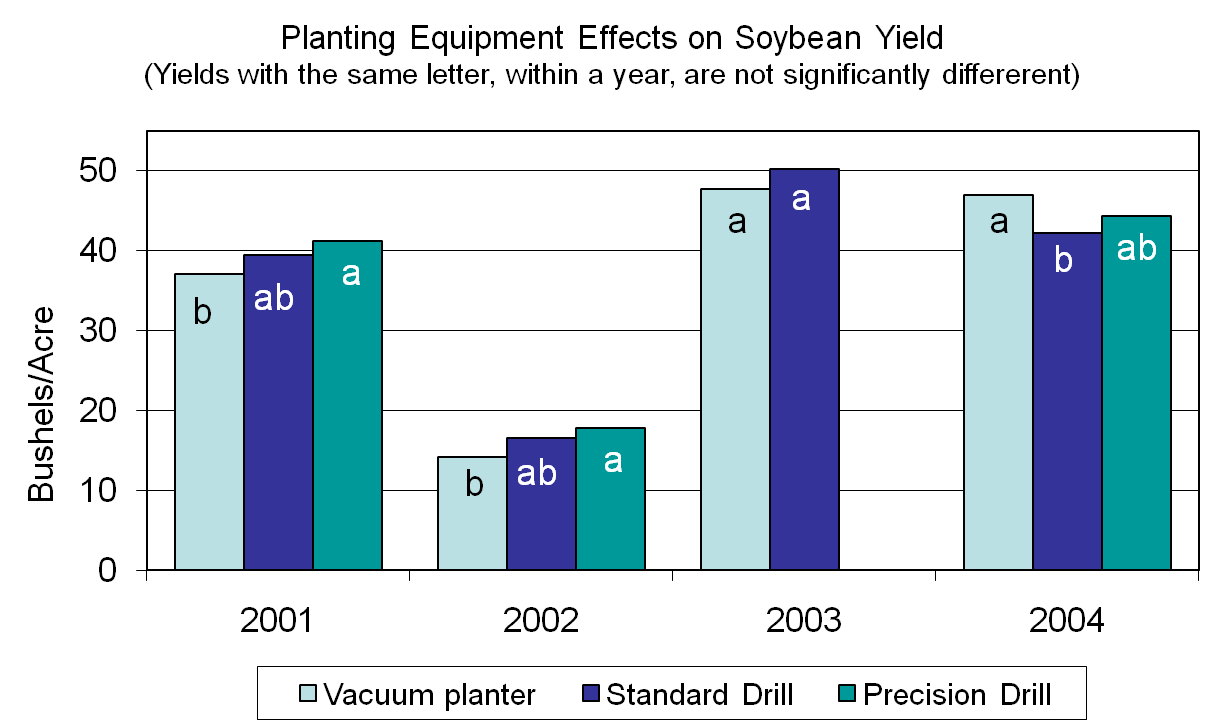 We must remember a main goal of many pre-plant and at-planting decisions is obtain adequate canopy and leaf area that captures 90% or more of the sunlight by the R2 (full bloom) to R3 (beginning pod) stages. A secondary goal related to planting date is to position the most critical time of crop growth, the pod (R3-R4) and seed (R5-R6) development stages, during a time of the season where there are sufficient resources (water, light, nutrients, CO2, and O2) to maximize yield.
We might assume that the earlier that we plant, the sooner the crop emerges; therefore, earlier emergence means faster canopy closer and more leaf area development. Furthermore, the earlier we plant, the sooner the crop will reach first flower (R1); therefore, the critical R3-R6 development stages will take place at a time when days are longer and there is more sunlight. While these assumptions are mostly true, the end result will not always contribute to final yield.
Let’s examine the first assumption that earlier planting means more leaf area. This is generally true, but how much leaf area do we really need? Soybeans need enough leaf area to capture 90 to 95% of the sunlight by the R2/R3 stages. This minimum requirement can usually be met by planting in April, May, and even early-June. So, adequate canopy development is not usually an issue until we double-crop the soybean after wheat harvest
Of course canopy development is affected by the environment in which the crop is growing, mainly by soil moisture and temperature. If soil moisture is lacking, growth will be slowed but usually not enough to prevent adequate canopy development, even with late-May and early-June planting dates. Besides, early-season soil moisture is usually not a problem with full-season no-till production unless a cover crop has removed most of it during a dry spring. Even if this were to occur, it can be alleviated by killing the cover crop earlier than planned during dry springs and when continued drought conditions are forecast. Low water-holding capacity soils may also affect canopy development even when there is adequate soil moisture at planting, but other cultural practices can make up for the lower leaf area in these situations (discussed later). I reemphasize that it is rare that leaf area requirements are not met with full-season plantings.
In addition, there is not as much to be gained (from a leaf area perspective) from planting between April and early-June. Why? Growth during April and early-May is slow due to cooler temperatures. Therefore, there is little difference in vegetative soybean growth between an April planting (cooler conditions) versus a May planting versus an early-June planting (warmer conditions). When planted in April, soybean may take up to three weeks to emerge and growth will generally be slow until mid-May. On the other hand, when planted in early June, the crop will emerge within 3 to 5 days and, if soil moisture is adequate, will grow rapidly. Therefore the time between planting dates will be much greater than the difference in the subsequent growth of the crop. In summary, I see few benefits, at least from the standpoint of canopy development, in planting soybean before mid-May to early June in Virginia.
An exception may be if you are planting an earlier-than-recommended maturity group (MG) for your area (MG III or early IV). In Virginia, late MG IV’s and MG V’s are the best adapted varieties, with IV’s doing better in the northern half and V’s doing better in the southern half of the state. If you stick with late IV’s and V’s, there should be no issue with canopy development when planted in April or May. On the other hand, a MG III planted in late-May to early-June may suffer as shown in the below graph. This is because there is not enough time between planting and flowering to allow adequate leaf area development. Still, note that yield suffered only when the MG III variety when planted in early June. The yield response does not always look this way due to rainfall patterns, soil type differences, etc. Sometimes MG III varieties will show a similar response as the later-maturing soybean. But, I think that it is safe to say that if planting early-maturing varieties, you should try to get those planted by mid-May to reduce the risk of low leaf area.
Of course, when planting double-crop soybean, canopy development will suffer. Therefore, other cultural practices such as narrow row spacing and greater seeding rates must be implemented to minimize low leaf area effects. Late-planting and double-cropping will be discussed in next month blog. 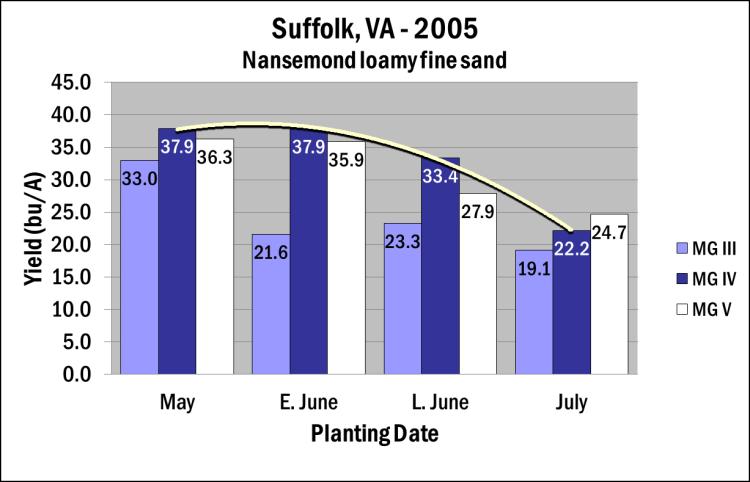 So, what about the second assumption that the earlier we plant, the sooner the crop will reach R1; therefore, the critical R3-R6 development stages will take place at a time when days are longer and there is more sunlight. The reasoning is that the longest day of the year is during late-June. With more daily radiation during pod and seed development, there is more energy being put into yield. So, it stands to reason that if we were to plant in April, we could push the pod- and seed-development stages into an environment where we can capture more light. This may work as long as the crop is running full speed ahead and there is no other stress to slow it down. But, is this the case in Virginia? Will there be adequate moisture and temperatures lower than 90O F during July and August? I doubt it.
Let’s examine this a bit further. For April and May plantings, a 3-day delay in planting results in about a 1 day delay in maturity. Therefore, planting in mid-April instead of mid-May will allow the plant to reach flowering (R1/R2) about 10 days earlier. Instead of the first flower being on the plant during the last 10 days of July, it’ll be there during mid-July. Instead of reaching R5 (beginning seed) by the last week in August and R6 (full seed) in early September, the crop can reach theses stages by mid- to late-August. But, is this really a good thing? Do we really want to shift the R4 to R6 stages into typically the hottest and driest time of our season? Even if you irrigate, you’ll have the heat to contend with. And it’s much more expensive to irrigation when the temperatures are higher.
Some may suggest that we should take this a step further and use an earlier maturing variety when planting in April. This is sometimes referred to as the Early Soybean Production System. OK, let’s use a variety with a relative maturity of 3.7 instead of one with a relative maturity of 5.2. This will shift the maturity of the crop 12-15 days earlier. So, we are now putting the critical R4 to R6 stages right into July and two weeks of August. Although the crop is experiencing longer days, it’s also experiencing higher temperatures and, likely, lower soil moisture. The Early Soybean Production System will work if you have a consistent August drought. However, our droughts in Virginia are intermittent. We are just as likely to have a drought in June as we are as in July as we are in August. We can’t predict it. However, it is usually hotter in late-July and August than it is in September. So, in the long run, it’s better to push soybean development in Virginia to a later part of the season, even though we cannot gather as much sunlight during the day. Maybe that’s one of the reasons that soybean following our barley crop usually yields as well or better than soybean planted in May.
To conclude, planting soybean early will have little effect on yield in Virginia. Plus, it could be detrimental, especially on low water-holding capacity soils. My suggestion is that you adjust planting dates to suit and spread out labor and equipment needs, but not to increase yield.