So far in 2013, Asian soybean rust (SBR) has been confirmed on soybeans in 99 counties/parishes in seven states in the U.S. (AL, GA, FL, MS, LA, SC, and AR) including seven counties in South Carolina.  Fields in both North Carolina and Virginia are being scouted, but SBR has not been detected. 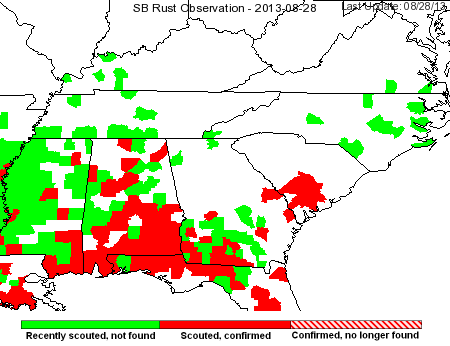 Soybean sentinel plots and commercial fields are monitored annually for early detection of SBR and tracking of disease spread.  Data are used to make recommendations for timely applications of fungicide sprays for control of SBR.  Currently soybean leaflets from sentinel plots are being evaluated on a weekly basis and no SBR has been detected thus far.  Diseases in soybeans at this time include Cercospora blight, brown spot, and frogeye leaf spot.  Anthracnose and target spot are likely to appear on soybean in the near future.

In 2012, SBR was first detected on samples collected from sentinel plots on October 12.  Since soybean was past the full seed (R6) growth stage prior to the appearance of SBR in Virginia, fungicide sprays were not recommended.  The risk of yield loss decreases if soybean rust is detected after the R6 development stage.  When deciding if and when to spray, it is important to consider disease pressure, weather conditions, and crop maturity.  If current weather patterns continue, SBR may appear in Virginia by mid-September.  Earlier maturing soybean are less likely to be exposed to high inoculum levels of SBR than later maturity groups.  Soybeans at earlier developmental stages (before R6) when SBR arrives in Virginia are more likely to require one or more fungicide applications.

Some sources for more detailed information on SBR are listed below: