The following is a question directed to me by one of our County Agents.  It’s an excellent question that is worth repeating and relates to the flat pods that are evident in this year soybean crop.

“I have seen a lot of flat pods this year and received a few calls about them.  I have attached some pictures. 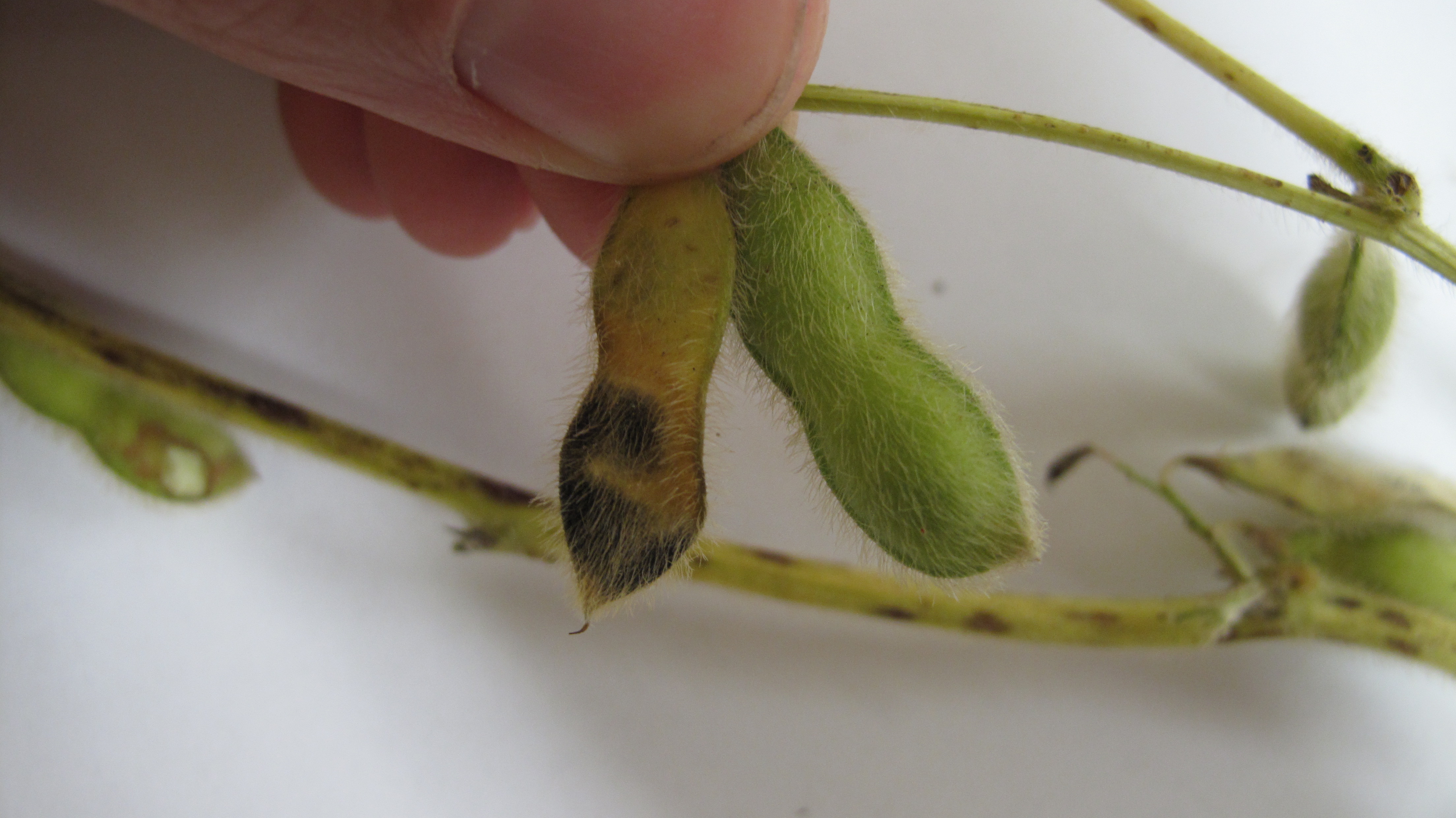 Is there a physiological reason other than wet then drought?  Flat pods can be found in both full season and double crop so the weather conditions have been variable.  Stink bug damage is not evident on the outside of the pod.  Disease is evident on some and not others.  Some pods have 0, 1, or 2 beans.  I am not convinced all of them are disease related.  (Photos) #1 and #2 are on t 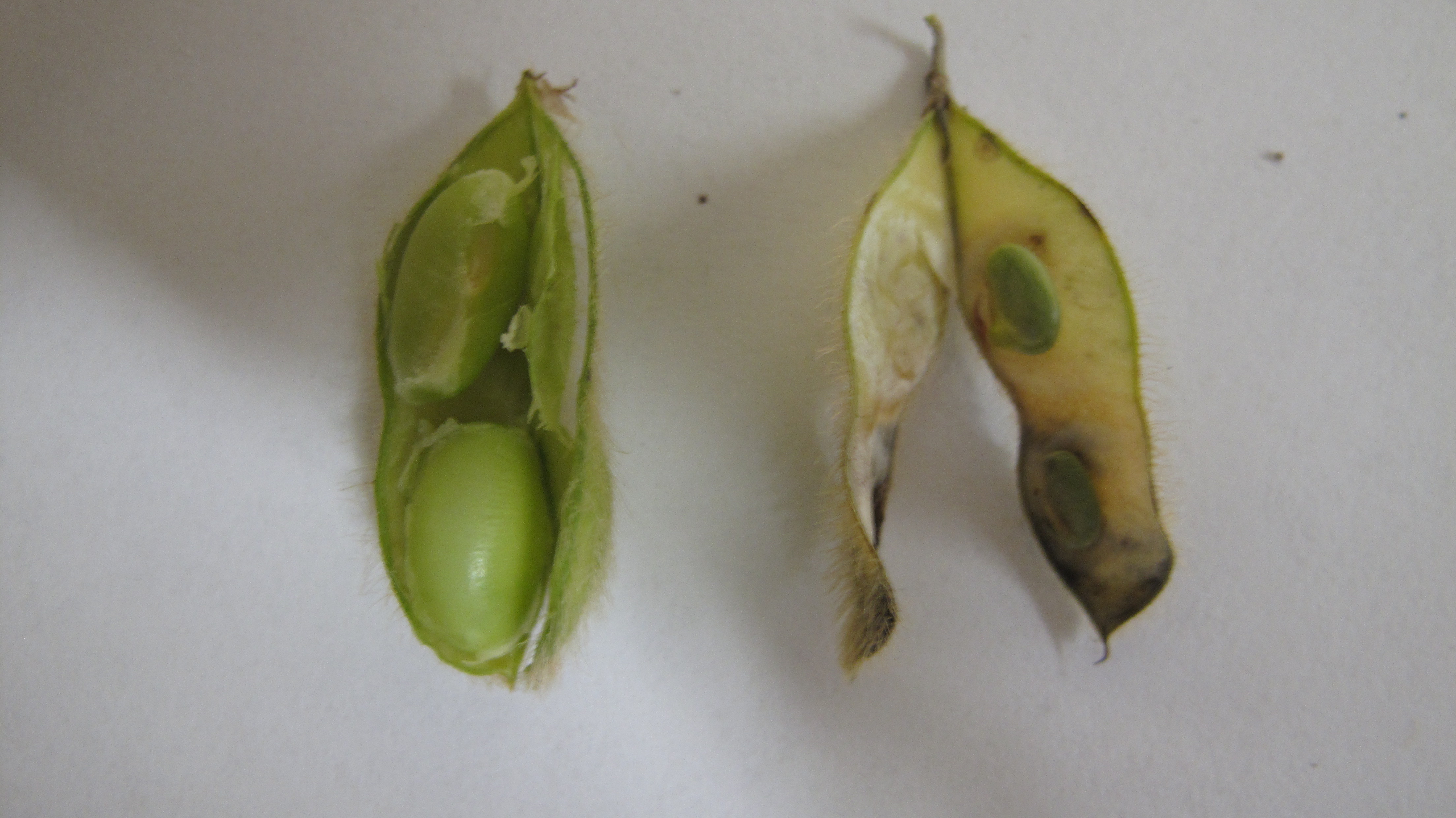 he same raceme from double crop.  (Photos) #3 is a selection from full season with full pods on top and various flats on bottom.  I would say we have many more totally flat pods this year.”

I looked at our soybean variety test here in Suffolk yesterday. I too am seeing lots of flat pods (seed have aborted within the pod). Basically, something is causing the seed not to fill out in the pods. There are several things that can cause the flat pods. You mentioned two of them – stinkbugs and disease. However, if you are not seeing punctures or black/brown seed within the pod, it’s not likely stinkbug. Certain disease can also cause seeds not to fill out. Basically anything that restricts movement of water or photosynthates through the plant and eventually into the seed can result in flat pods. This could be a stem or root disease that is restricting movement of nutrients to the seed. It could also reflect a nematode infestation coupled with dry weather; hence restricting root uptake and resulting in drought effects. Or it could be a foliar disease that has lessened leaf area; therefore, reduced the amount of photosynthate into the seed. The first photo is showing symptoms of Cercospora blight and leaf spot on the stem in the background. 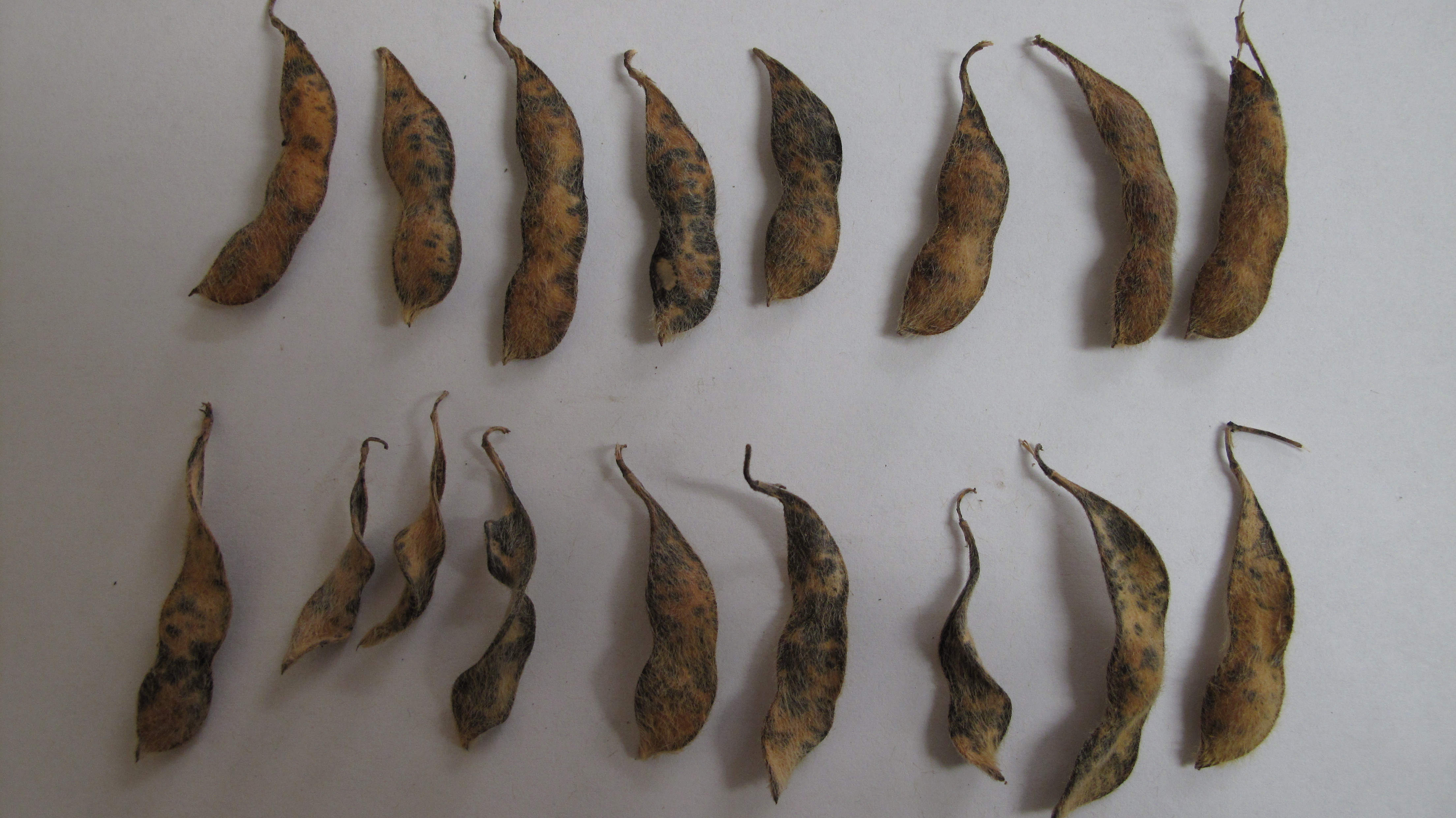 The photo to the right also seems to be showing symptoms of this disease on the pods, although those symptoms could also reflect phomopsis or another late-season disease.  Cercospora blight and leaf spot, along with several other foliar diseases, was rampant this year. Foliar disease can result in less effective leaf area, but also early defoliation; the result in less photosynthate to fill the seed.

Still, the most likely culprit is the dry weather we experienced in September. We had very good yield potential going into September. There were lots of pods and most of these pods were set (they were not going to abort). Therefore, the effect of the drought at this time would not be less pods (the most important component of soybean yield), but less viable seed per pod or smaller seed size. When the crop can no longer support the pods and seed load on the plant, something has to give. In my opinion, the aborted seed in the pod (resulting in flat pods) that we are experiencing is primarily the result of a dry September. Drought stress is largely responsible for the flat pods.

In addition to the flat pods, I think we’ll also see smaller seed that we have in the past. Seed size is usually the second most important component of yield, behind pod number. But with the large number of flat pods (less seed per pod), we may not see as big of an effect on seed size, especially with the recent rainfall. Regardless of whether the problem is aborted seed within the pod or seed size, our yields will likely be lower than we think they will based on a visual inspection because of less seed per pod or smaller seed.

Finally, keep in mind that a combination of things (drought stress, disease, etc.) may be causing the flat pods. In my experience, I rarely can attribute such an event to just one factor. If you take the “glass half full” attitude, this could be an opportunity to discover an unknown problem (nematodes, compaction, improper variety selection, etc.) and begin future efforts to solve the problem. If this is occurring in just one field and not another that is close by; then it’s an opportunity to find out what’s wrong with that field.

The take-home message is that soybean will compensate for stresses by either dropping pods, producing less seed per pod, aborting seed (resulting in flat pods), or reducing seed size, depending on when the stress occurs. The timing of the dry weather following a very wet year that resulted in a heavy pod load likely resulted in the flat pods that we’re experiencing.

Last week, soybean rust (SBR) was confirmed in several more counties in Virginia bringing the total to eight (Suffolk, Chesapeake, Virginia Beach, Isle of Wight, Hanover, Prince George, Brunswick, and Sussex). The level of infection on soybean leaflets was low, and though we have confirmed the fungus is present throughout the region, we are not seeing much disease development. 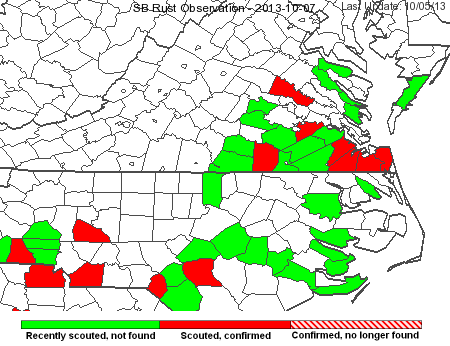 This is probably due to dry weather conditions, and fortunately, this has allowed for most of the soybean crop to reach R6 and escape the threat of yield losses from SBR. The fact that the fungus has spread but caused little disease is a good illustration of how important environmental conditions are to the development (or lack of development) of disease epidemics. Even if the weather conditions do become more conducive, there is not enough time left in the season for SBR to reach high enough levels to impact yield. The SBR fungus arrived relatively early in Virginia this year, but it is unlikely to impact the soybean crop in the state.

The standard recommendation for control of SBR once it is confirmed within 100 miles of a crop is to spray soybeans that have not yet reached the R6 stage with triazole or pre-mix fungicides. However, an important caveat to the rule this late in the season is that the crop should also have good yield potential. Otherwise, there may be little or no economic benefit to fungicide sprays. Both Dr. Holshouser and Dr. Rideout concur that the threat of SBR to Virginia soybeans has likely passed.

As always, feel free to contact me if you have any specific questions or concerns.

Wow, leave the country for a couple of weeks and all hell breaks loose.  Actually, it wasn’t that bad.  But, the day that I arrived in Beijing, I received notice from Dr. Hillary Mehl, Extension Plant Pathologist, that soybean rust was discovered in Suffolk.  This may have been the earliest that we’ve discovered the disease in Virginia.  And it came in a year that many of our soybean had not yet reached the R6 (full-pod) stage.  So, Dr. Mehl went into attack mode and begin letting everyone know of the discovery.  Overall, I think that our communication system worked well.

Then the question of whether to spray or not began to arise.  We took the conservative approach and recommended that all soybean that had not reached the R6 stage and was within 100 miles of the Tidewater AREC should be treated with a triazole fungicide.  This recommendation really only affected our late-planted double-crop soybean as our full-season soybean crop and much of the double-crop soybean that were planted in late June had already reached the R6 stage.

Was this recommendation correct?  Yes, I believe it was.  But, only because we cannot predict future weather conditions.  In actuality, the dry weather slowed down the disease’s spread.  It really never got worse in Suffolk, where we first found it.  Yes, it has now been confirmed in several other counties (see the map below for the latest update), but the incidence and amount of leaf coverage is very low.  So, in the end, a fungicide application would probably have done little good.  But, we will verify this with our research plots. 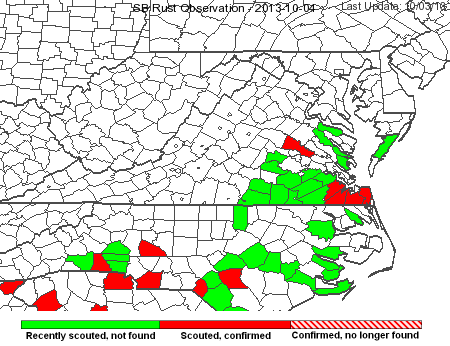 Will the disease continue to spread?  If we get the rainfall early next week, I think we’ll see it start sporulating again and begin spreading a little faster.  But, I’d think that most of our soybean are safe now.  If the soybean hasn’t yet reached R6, then a frost may make the disease irrelevant.  Plus, it’ll take a few weeks before the disease will get to yield-reducing levels.  By that time, our crop will like be physiologically mature.

We’ll keep looking an tracking the disease’s spread and incidence.  We should be able to learn much from this year.  And this knowledge will help us to make better decisions in the future.