Although we are currently drying out after the heavy rains over the weekend, I thought it would be a good idea to review the effects of flooding on soybean.  Usually, widespread flooding is not a major issue for us due to the sandy nature of our soils and/or well-drained fields.  Still, it can and has happened.

During the week ending on June 12, some parts of Virginia received 6 to 10 inches of rainfall (see map below).  Plus, more may be on the way. 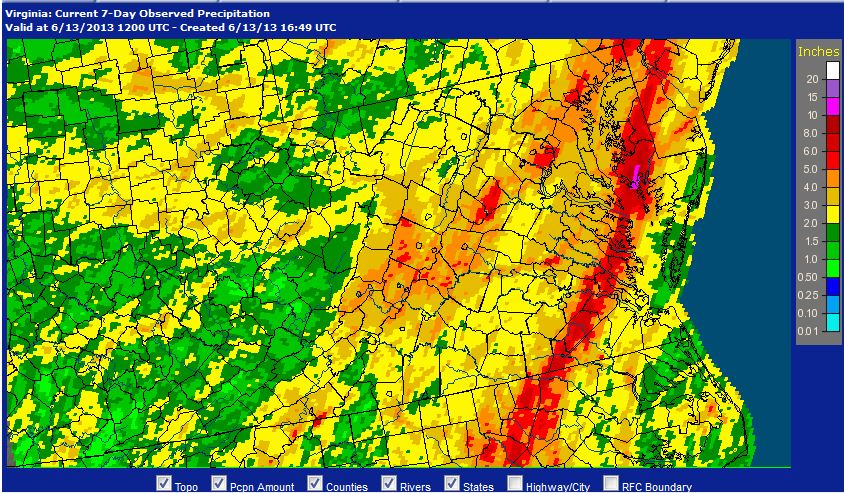 This heavy rainfall has resulted in saturated soils and in some cases, flooding.  This field is a Soybean Research Verification Field in Dinwiddie County that I’ve been scouting.  The photo was taken after a hard rain on Friday, June 7. 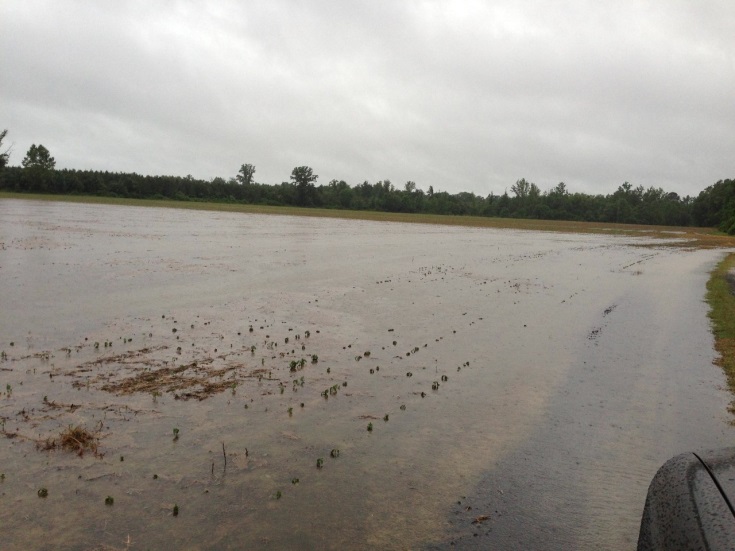 It’s difficult to know the long-term effect of flooding on soybean fields.  Research is limited, but we do know that the fate of flooded fields will largely depend on 1) the development stage during which the flood took place; 2) the duration of the flood; 3) the temperature during and right after the flood; and 4) the drying rate after the flood.

Flooding can also result in soil crusting.  This will be worse in tilled fields that are low in organic matter and surface residue.  Unless the crust is broken with a rotary hoe or similar implement, the emerging seedling, already stressed by the flood, will have an even more difficult time emerging and growing.

There is also an increased chance of seedling disease, but this is less of a problem at this time of the year with warm soil temperatures.  Poor stands will be the biggest issue.  To determine whether or not re-planting will be beneficial, refer to Virginia Soybean Update Vol. 13, No. 3 (June 2012).

Flooding After Emergence.  Soybean can generally tolerate up to 2 days of flooding.  But if the saturated soil conditions persist for more than 2 days, significant yield reductions may occur.  The amount of yield reduction will vary with development stage, duration of the flood, the type of flood (stream overflow vs. low land depressional), temperature during the flood, the drying rate after the flood, and the overall environmental conditions after the flood.

In general, the following comments can be made.  Flooding in the reproductive stages causes more damage than in the vegetative stages.  Yield is reduced more with longer flooding duration and with a slower drying rate of the field (e.g., a well-drained sandy soil will recover faster than a poorly-drained or heavier textured soil).  Higher temperatures after the flood will lead to greater yield losses.  This is because the recovering plant will deplete its stored energy at a faster rate.  In addition, high soil temperatures will result in greater microbial respiration, which lead to greater depletion of oxygen.  The best conditions for a recovering soybean crop are cool, cloudy days and cool, clear nights.

In a Arkansas study conducted on two poorly drained soils with slow permeability (Sharkey clay and Crowley silt loam), researchers found that yield decreased by 1.8 and 2.3 bushels per acre per day of flooding on the Sharkey clay when soybean were flooded from 2 to 14 days at the V4 stage (4 trifoliate leaves on the main stem) and R2 (full flower) stages, respectively.  On the Crowley silt loam soil, yield was reduced 0.8 and 1.5 bushels per day of flooding at V4 and R2, respectively.  It’s worth noting that this research did not have an un-flooded control treatment; therefore, the 2-day period of flooding was considered the control.  This research clearly showed that duration of the flood greatly impacts yield.  In addition, flooding during reproductive stages caused more yield loss that if the flooding occurred at vegetative stage.  Eight varieties were tested, but variety did not affect the flooding response.  Other researchers have however indicated that certain varieties exhibit greater flooding tolerance.

Another study in Louisiana evaluated 7 days of waterlogging on V2, V3, V7, R1, R3, R5, R6, and R6.3 stage soybean under greenhouse conditions. The V stages represent the number of trifoliate leaves on the main stem and the R stages represent beginning flower, beginning pod, beginning seed, full seed, and the temporal midpoint of seed filing.  In summary, the early vegetative stage (V2) and the early reproductive stages (R1, R3, and R5) were most sensitive to waterlogging. 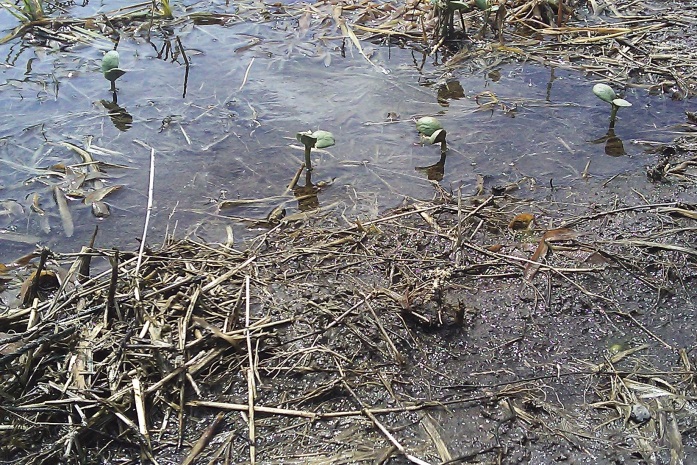 Although some research has been conducted, estimating the yield loss due to flooding is nearly impossible because we don’t know what the conditions will be like afterwards.  The best gauge may be ones past experience with fields that have flooded.

Fortunately, some of these experiences have been documented.  An example is research conducted in Ohio in 1998, where researchers monitored several fields that flooded during that year.  They reported a 20% reduction in soybean yield in one field and a complete loss in another field that was flooded for 3 days during the V2-V3 stage.  The field with the complete loss was due to thick sediment coating the plants and not allowing any recovery.  However, flooding for 3 days in two other fields caused no yield loss and flooding actually increased yield in a fifth field.  In the field where yield was increased, sediments covered the plants but a light rain soon after the flooding washed the sediment off.  In addition, greater residual soil moisture associated with the flooded area when a late-season drought occurred was probably responsible for the greater yield.  After 6 days of flooding, yield losses ranged from 0% at two sites to about 60% at a third site and over 90% at another site.  At one of the sites with no yield loss, the subsoil had a high sand content, which enable the root zone to quickly return to aerated conditions.

In another study, researchers found that flood irrigation for greater than 2 days reduced soybean yield by 20% as compared to a 1-day flood treatment.

What to Do After the Flood.  While it may seem that there is little to do to help a flooded crop, it is very important that we minimize any other stress on the crop that can prevent recovery.  First, try to stay off of the field.  Wet fields compact easily.  Compaction will further stress the crop and slow its recovery.  Make sure that the field is dry enough before taking equipment back on it.

Evaluate the stand.  If a stand reduction occurred, determine if it’s worthwhile to replant.  Remember that after mid-June, every day delay in planting will cost you about ½ of a bushel in yield.  The plants that remain are still higher yielding than seed that can now be planted, even if the stand has been substantially reduced.

Stress such as herbicide injury can slow the crop down further.  Still, weeds need controlling.  But you may want to select herbicides (usually as tank-mix partners to glyphosate) that don’t cause a significant amount of burning.

Cultivation is an option to conventionally tilled fields to help aerate the soil.  However, cultivating a wet soil can do more damage than good by causing additional compaction, which in turn would further stress the crop.

You may also want to dig a few roots and inspect for adequate nodulation.  Make sure the nodules are pink.  I see little that can be done, but knowing that the nodules are still working may give you peace of mind.  And while you’re doing that, split some stems and roots to check for any disease.  If suspected, send in to one of our Plant Disease Clinics to be further evaluated.

Finally, some will want to apply some type of foliar fertilizer to the crop to “kick-start” it back to health.  But, I see little advantage of this.  Remember that the real problem is lack of O2 to the roots and CO2 buildup in the soil; only after the roots begin to receive O2 will the recovery process start.

Hopefully you haven’t experienced severe flooding (> 24 hours).  But if so, be patient and evaluate the field.  Then make good decisions on how to handle it.