Roundup Ready and LibertyLink soybean varieties have made weed control much simpler.  In addition to being easier, we are generally doing a better job at controlling all weeds, especially those that could not be controlled well with traditional herbicides.  Perennial weed control is especially better with glyphosate.  However, weed resistant to glyphosate continues to get worse.  To date, we have glyphosate resistance in marestail (horseweed), lambsquarters, Palmer amaranth, common ragweed, and johnsongrass in Virginia.  To date, no resistance has been documented for glufosinate (Liberty or Ignite herbicides).  I strongly encourage using preemergence residual herbicides with glyphosate and glufosinate, even in double-cropped soybean.  With glyphosate, tank-mix partners are also in order due to the increasing weed resistance issue.

It is worth noting that glufosinate will not kill as big of weeds as glyphosate, nor is it as effective on grasses.  To me, this may be an advantage of the LibertyLink program.  Why?  First, it almost requires one to put down a preemergence herbicide, if nothing else to buy one a little time for the subsequent postemergence glufosinate application.  Secondly, you generally need to make the glufosinate application before the weeds reach 4 inches in height (height requirements depend on the weed to be controlled; see the label for weed-specific height requirements).  While these two “advantages” may not seem to be advantages, they will help insure that weeds do not become resistant to glufosinate.  In addition, if we let the weeds grow in competition with the soybean much longer, we’ll lose yield (see the discussion below).

On the other hand, since glyphosate will kill larger weeds that glufosinate, we tend to wait too late to spray.  It has been shown that spraying weeds that are too large can encourage herbicide resistance.  That in itself should make timely weed control a priority.  But other than herbicide resistance, I see two main problems with relying on glyphosate weed control systems.  First, we tend to spray later than we should because we want to kill all of the flushes of weeds with one spray.  This is a mistake!  As I said, glyphosate will kill larger weeds than most of our other postemergence herbicides.  So, why not try to wait and only spray once?  While that approach will save time and money if two applications would otherwise be necessary, it could be costing you more money in the long run by letting weeds rob the crop of essential light, water, and nutrients.  The figure below shows the effect of weed competition with soybean as related to application timing and row spacing.  In general, we need to spray our herbicides within 2 to 3 weeks after the weeds emerge.  If we don’t, we’ll suffer the consequences of lower yields and possibly less control. 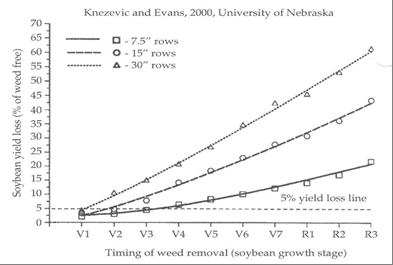 The second problem is related to the first.  Weeds become more difficult to control the bigger they are, even with glyphosate.  Most of our control failures (and glyphosate resistance problems) are due to allowing weeds to get too large.  Weeds such as marestail, lambsquarters and morningglory are much more difficult to control when they are large.  Again, spray within 2 to 3 weeks after weed emergence. 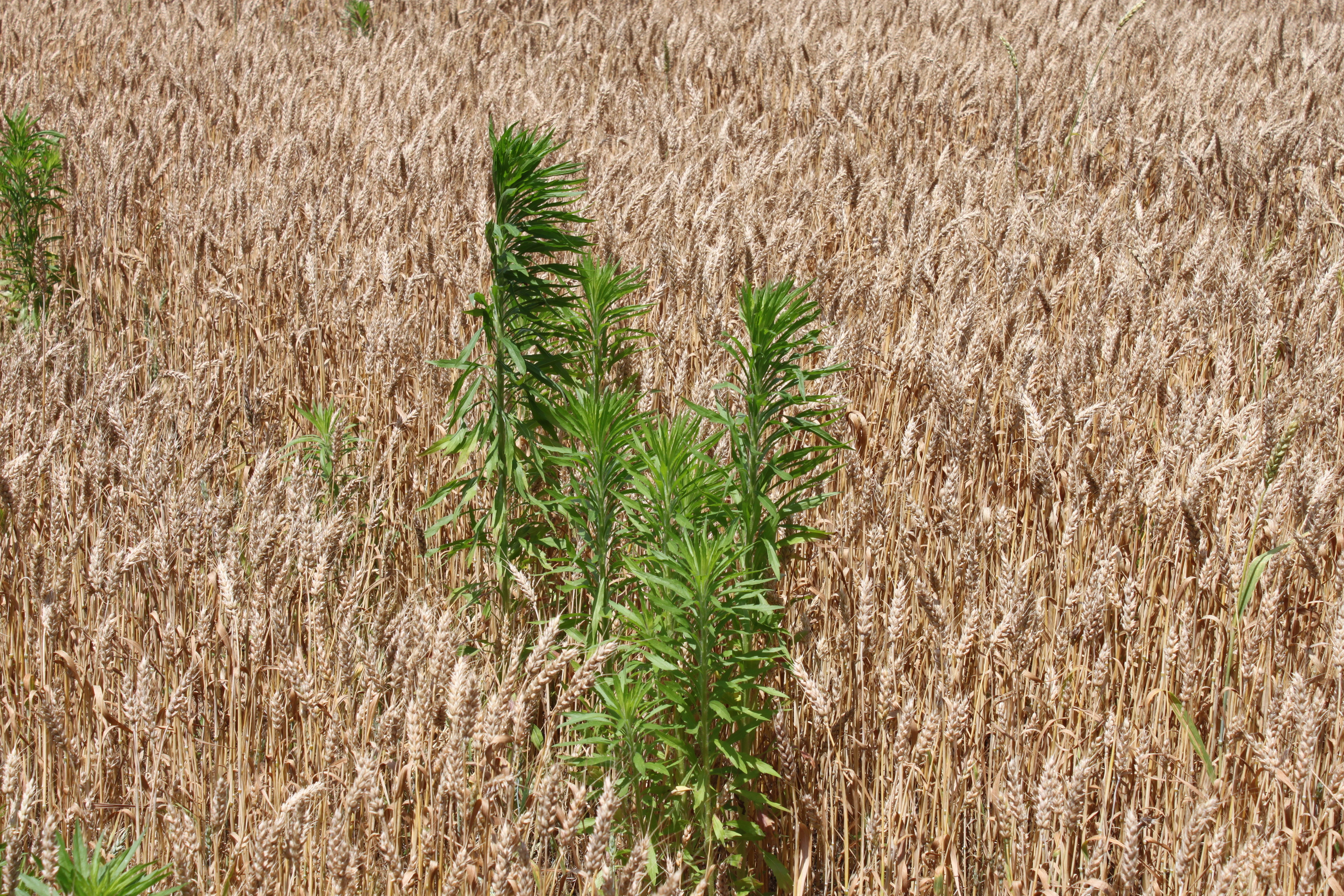 Over the last couple weeks, I am seeing a lot of Marestails poking through the top of wheat fields throughout the county. This is a major concern for the farmers that have to manage this weed in their bean crops. Once these weeds get the point of being 30 inches or greater in height, control is difficult with any herbicide.

There are a couple options for control after the wheat harvest. One is the use of mechanical cultivation prior to planting beans. Disking, turbo-tilling, or running a dyna-drive will eliminate these weeds that are present. This option does not appeal to many producers due to moisture loss and conservation tillage program payments. The second option is using glufosinate (Liberty formerly called Ignite). An application of Liberty should control or suppress these weeds, but at these sizes two applications may be necessary for complete control. A second application of Liberty will not be possible unless Liberty Link beans are planted. In either scenario, the use of a residual material at planting such as Envive, Prefix, or Boundary is strongly encouraged.

What is causing these escapes? Two things are the likely culprit. One is the lack of use of a burndown/ tillage before planting wheat and two is inadequate weed control in the growing season. Harmony is widely used for weed control in wheat but is not a great product on Marestails. Many applications were made after the weeds were 8 inches in height or greater. Harmony will simply not control this species at this height.

So, what do we do next year to prevent these problems? BURN DOWN the land before planting wheat if you don’t till before planting. Also, in season Marestail control can be obtained using 2-4D after wheat is fully tillered but before jointing. Scouting your fields in late February or early March when you start to see winter annual weeds may be necessary to determine if control measures are needed.