Our soybean crop is moving right along.  Much of our May-planted crop has hit or it approaching the R6 stage.  Our double-cropped soybeans are in the R4-R5 stage depending on their maturity, planting date, and whether or not they experienced early-season drought.  There’s a tendency for us to believe that the crop is made after the seed have met in the pod.  However, as shown below, only 50% of our yield has been made at the R6 stage. 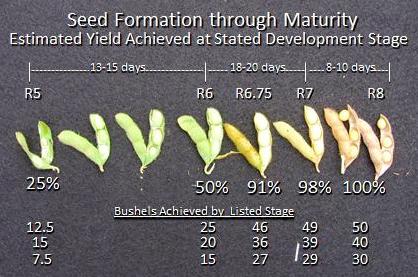 Dry weight will continue to accumulate in the seed for the next 3 weeks until the crop reaches the R7 stage (physiological maturity), which is defined as one pod on the plant that has reached its final mature color.  Much of this seed weight is due to translocation from other plant parts, especially the leaves and petioles (remobilization).  Sometimes soybean is called a self-destructing plant.  This is largely true.  As photosynthate is moved from the leaves to the seed, the leaves will turn yellow and drop from the plant.  If the leaves are yellowing and dropping due to this natural process, then we shouldn’t be concerned.  However, if the leaves are dropping due to another reason such as dry weather or disease, we should take notice.  It is important to keep the leaves green as long as possible to maximize yield.

It takes about 2 weeks to move from the R5 to R6 stage and another 3 weeks for to move from R6 to R7.  This is a long time and much can happen during this period.  First, we must protect the developing seed from insects such as corn earworm and stink bugs.  After R6, these two pests are not as much of a concern, but defoliators such as soybean looper can still remove green leaf area, which I’ve already stressed, is vital for maximum yield.  We also need to be concerned about foliar disease, which can also rob us of green leaf area