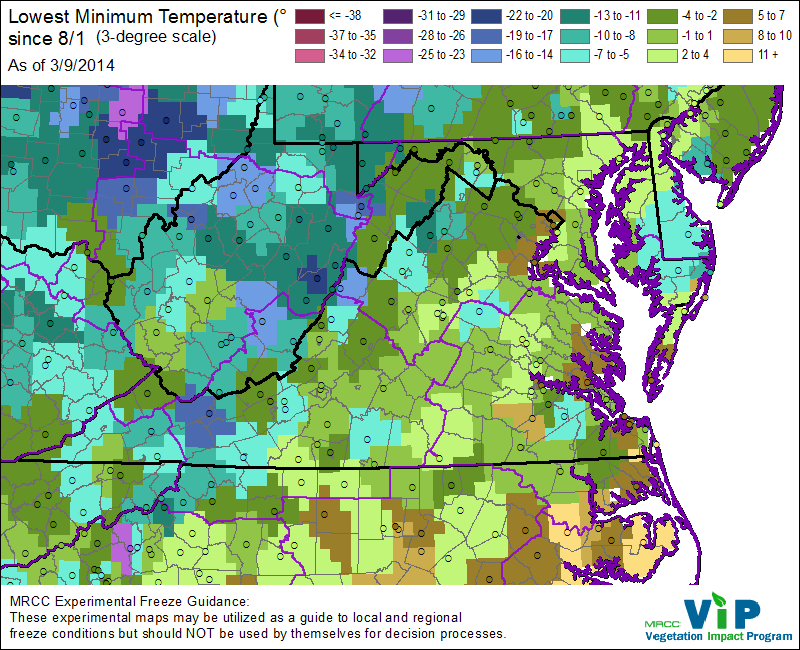 The winter of 2013-14 will surely go down as one of the colder, snowier winters in recent years. Many growers have been asking about potential flower bud damage from the cold temperatures that we’ve had. As a general rule-of-thumb, peach and sweet cherry buds are hardy to about -10F, and near complete bud loss and perhaps some branch damage will happen when temperatures are below -20F. As I mentioned in a previous post, plants are not affected by wind chills, so we are talking about absolute cold temperatures, which will be warmer than the wind chill temperatures that are reported in weather reports. Apples and pears are generally hardy down to -25F. However, hardiness is much less when: there is a warm spell preceding the cold temperatures, when trees have already been pruned, when the cold temperatures persist for an extended period of time, or when trees were under water or nutrient stress in the previous season. Under these circumstances, peach and sweet cherry buds might be damaged at 0F or even warmer. During this past winter, peach buds may have been killed during multiple events.

Looking at the absolute cold temperatures from August 1 to present, we see that many of the fruit growing regions in the mid-west and Northeast likely have moderate to significant damage to their peach and sweet cherry crops. Zooming into the Mid-Atlantic, we see that there were some areas along the western edge of Virginia that sustained temperatures below -10F this winter. Many other areas of Virginia have had temperatures in the minus single digits. To get an idea of how much peach bud damage is in the Winchester area, last week my lab  collected 10 peach branches from each of seventeen different blocks of peaches. Many of the blocks were located at the AREC, but we also collected branches from some nearby farms. The branches were kept in a vase at room temperature for 24 hours, and then every bud on every branch was dissected from the tip to the base to look for damage. Healthy buds are green and look moist, while damaged bud are brown and translucent.

Table 1. Peach bud damage from the winter of 2013-14. Branches were collected on March 4 and analyzed on March 5.

From these data it is clear that there are both variety and site differences in bud damage. A few blocks are likely to have no or little fruit this year, but most blocks have the potential to set a full crop. Remember that it only takes 15-40% of the buds to make a full crop. The bottom line is that before you prune, it would be a good idea to assess how much damage you have in your trees. Only in situations where severe bud damage occurred should growers leave extra wood when pruning.

Penn State did a similar analyses of peach buds, and found that only 22-32 percent of the peach buds were dead at the Biglerville Fruit Lab.

1 thought on “Fruit Bud Damage in the Winchester Area”