I am on twitter and follow NASA Astronaut Scott Kelley. Kelley is stationed on the space station and posts some incredible pictures every day. On January 16, he twitted the following: 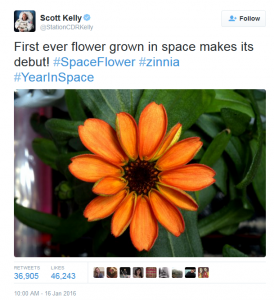 His tweet not only was very popular, but many news outlets wrote stories about it. I enjoyed the news stories, but I got much more information about the Zinnias from the following NASA website: http://www.nasa.gov/image-feature/first-flower-grown-in-space-stations-veggie-facility. There are other posts there too about the project that you can read up on.

Zinnias are native to Mexico, Central America and the southwestern US. They were named after German Botany Professor Johann Gottfried Zinn.

Zinnias are very easy to plants to grow. You can start the seeds indoors if you like, but I find it better to start them directly outdoors. Zinnias sprout very quickly and if started indoors, can soon become very leggy and unwieldy.   Plant them in an area that receives full sun and in soil that is well drained.

As the plants grow, you want to make sure that you deadhead them frequently. Removing the dead flowers not only keeps the plant from using energy to produce seed, but it helps encourage branching and the production of more flowers.

As the summer wears on, Zinnias become susceptible to mildew. If the plant is otherwise healthy, you may not see too much of decline. To help from getting mildew, try to keep the upper part of the plant as dry as possible. Water the plants by watering the ground around them and not overhead. Water early in the day so that excess moisture will dry. Try not to crowd plants so that they get good air circulation. And lastly there are some mildew resistant varieties that you can plant.

Speaking of varieties, there is a whole host of species and varieties commercially available. They can range in height from 6” to over 36”. There are many flower forms including dahlia- flowered, quilled, crested, ball or pompon-like, single, semi double, fully double. And most any color except blue.

And lastly, two more reasons to plant Zinnias. First the taller varieties are great as cut flowers. They produce abundant flowers that are very large. And finally, they are great flowers to plant if you want to attract butterflies as a nectar source, just make sure they are the single type and not the double type.