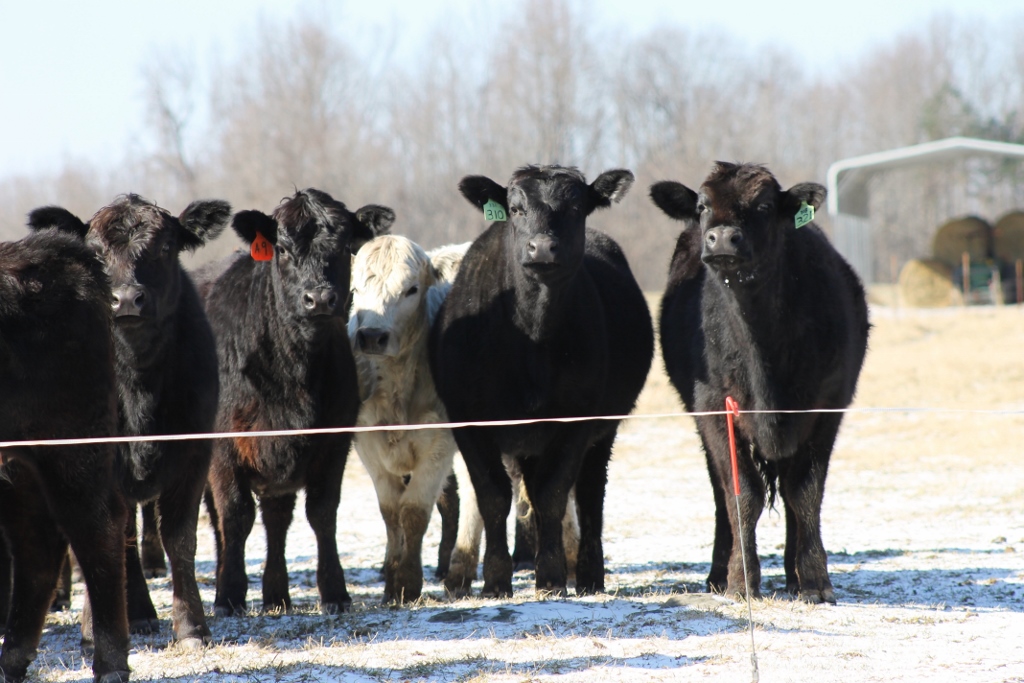 Their farm business took shape in 2003 when they bought land in Blackstone to support their cowherd. Around this time, Jennifer was an Extension agent in Nottoway and Whit also had a career in agriculture. As the business grew, Jennifer made the transition to caring for the farm full-time, and Whit joins her to manage the farm outside of his job. 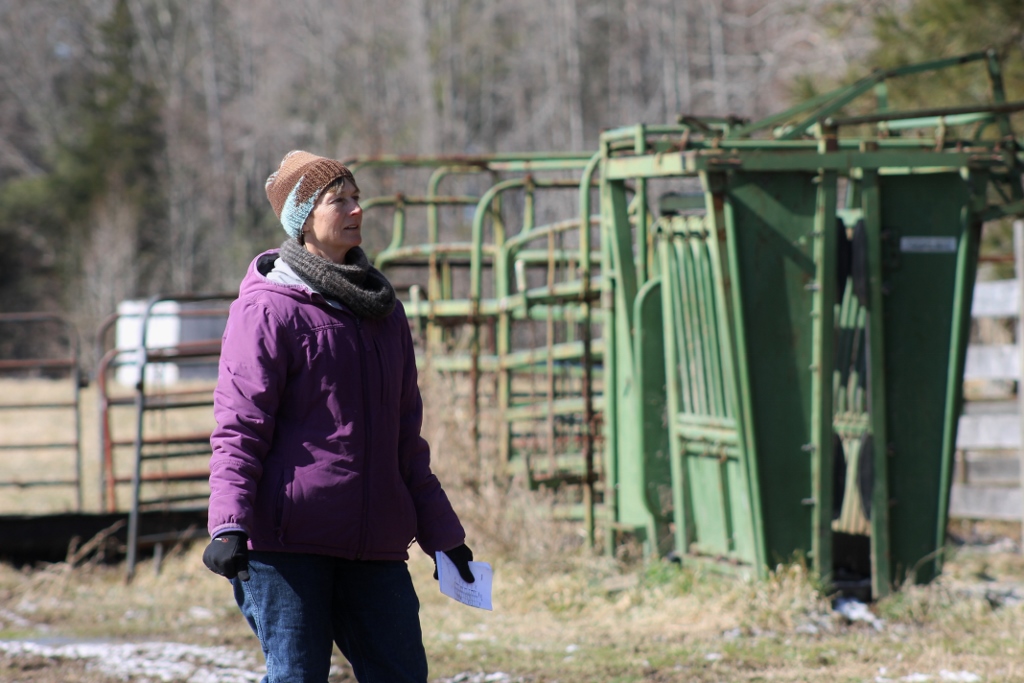 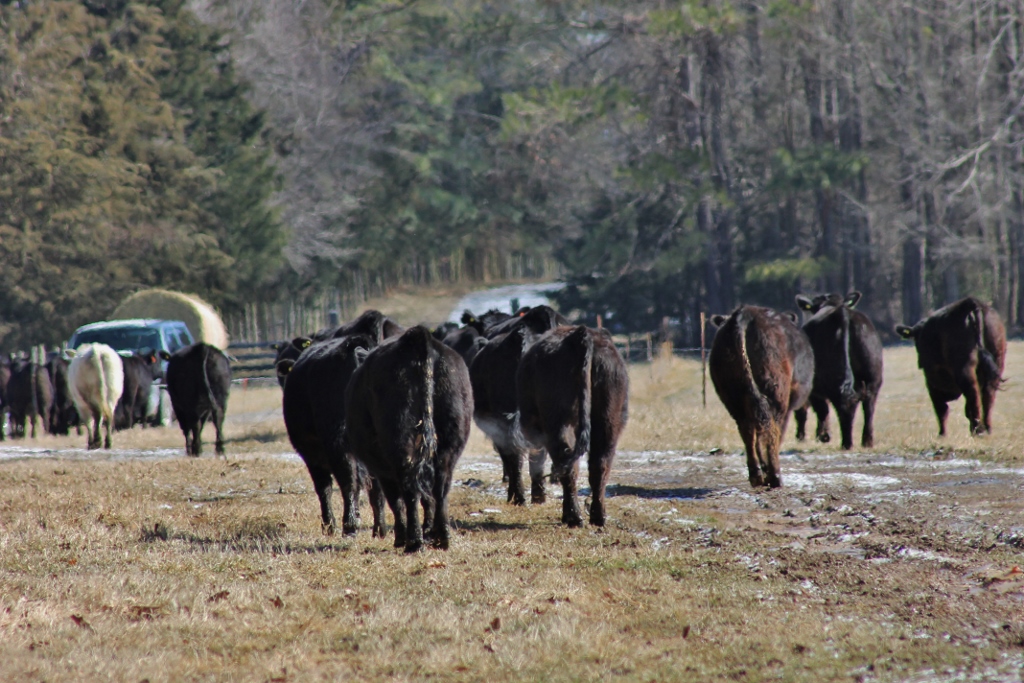 Today, the family runs a commercial herd comprised mostly of Angus and Gelbvieh crosses. The farm is primarily a cow-calf operation, meaning that Whit and Jennifer breed their cows and heifers each year, raise the nursing calves to weaning age, and sell the calves after weaning time. They choose some of their heifer calves to stay in their breeding herd. They also send some of their animals to annual Virginia Premium Assured Heifer sales and Virginia Quality Assured feeder calf sales in conjunction with the Amelia Area Cattlemen, a local producer group. 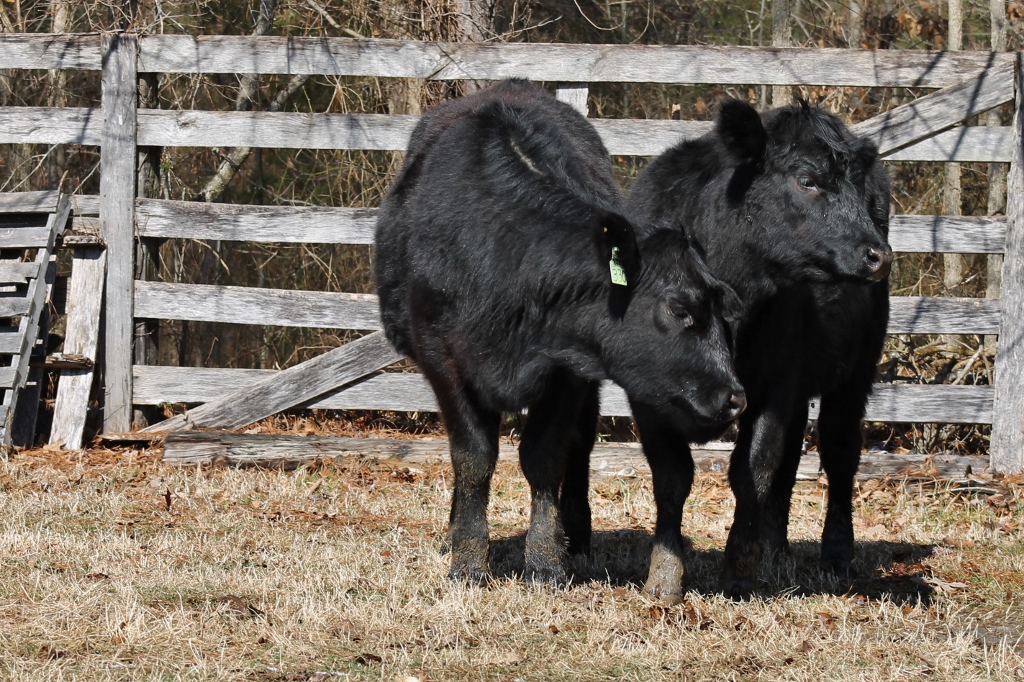 While the calves born on the Morris farm may eventually go on to a feedlot for the last few months before harvest, these calves and their dams spend a considerable portion of their lives out on grass. In fact, the many cattlemen who run cow-calf operations in Virginia know that the most efficient and economical way to manage cows and their offspring from calving time to weaning time is on pasture—pasture which, Whit and Jennifer have learned firsthand, requires strategic management if it is to meet the demands of lactating cows and large, growing calves.
Cattle producers can feed hay to meet the animals’ forage requirements when grass is not growing in the summer or when it goes dormant in the winter, but the cost of making or buying hay can far exceed the cost of maintaining a good stand of grass. To minimize the number of days that they must feed hay and to maximize the health, efficiency, and productivity of their pastures, Whit and Jennifer have spent the last several years building and improving a controlled grazing system to take full advantage of the tall fescue, clover, Bermuda grass, and other species growing on their land. 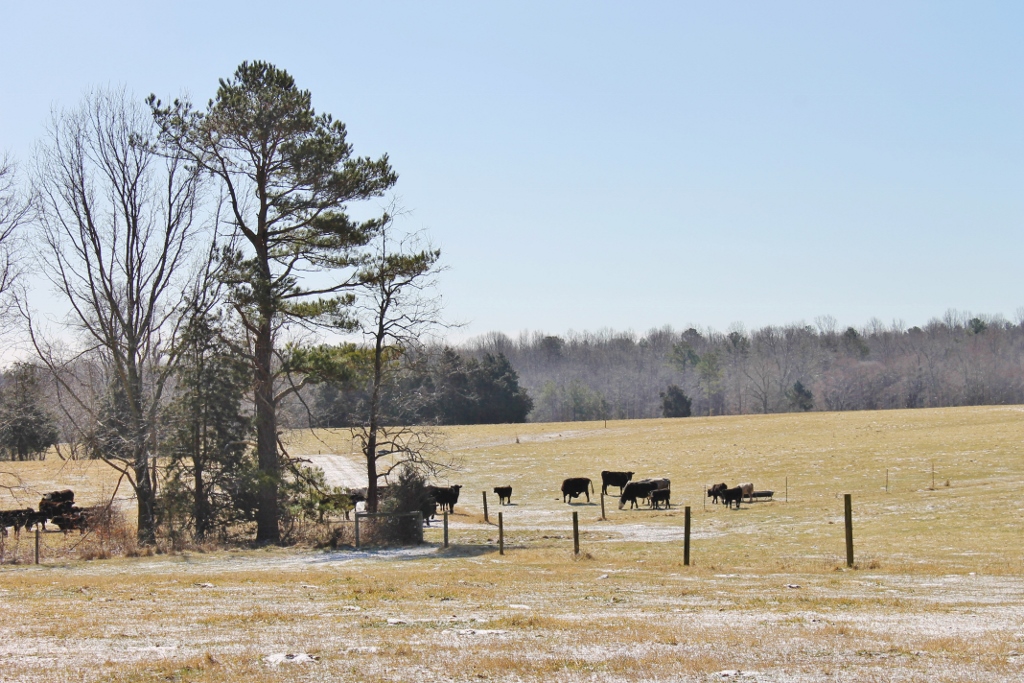 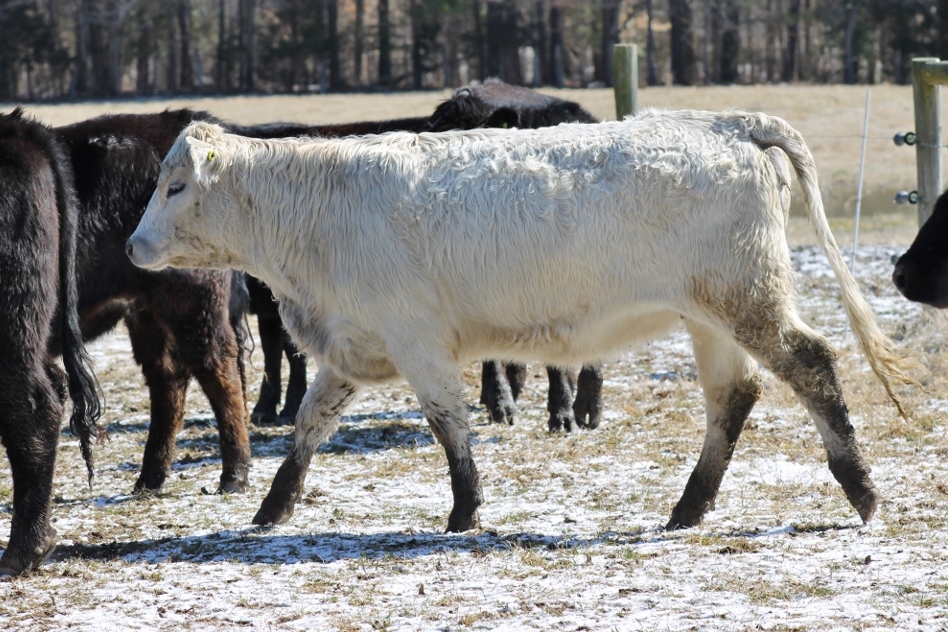 Their grazing plan changes throughout the year according to conditions and forage growth habits. In the summer, the cattle follow a “rotational grazing” system. In this system, the pastures are subdivided and animals are given access to one area at a time. Jennifer moves the cattle to a new area when the grass is grazed to a critical height. If cattle stay in one place too long and graze forages too closely, grasses lose nearly all of their leaf area. They then have to expend their root reserves to supply energy for sending out more leafy growth, and they tend to bounce back slowly even when given a rest period. If Jennifer pulls the cattle off of each paddock before the cattle overgraze it, the grasses have enough leaf area left behind to fuel fast regrowth through photosynthesis. 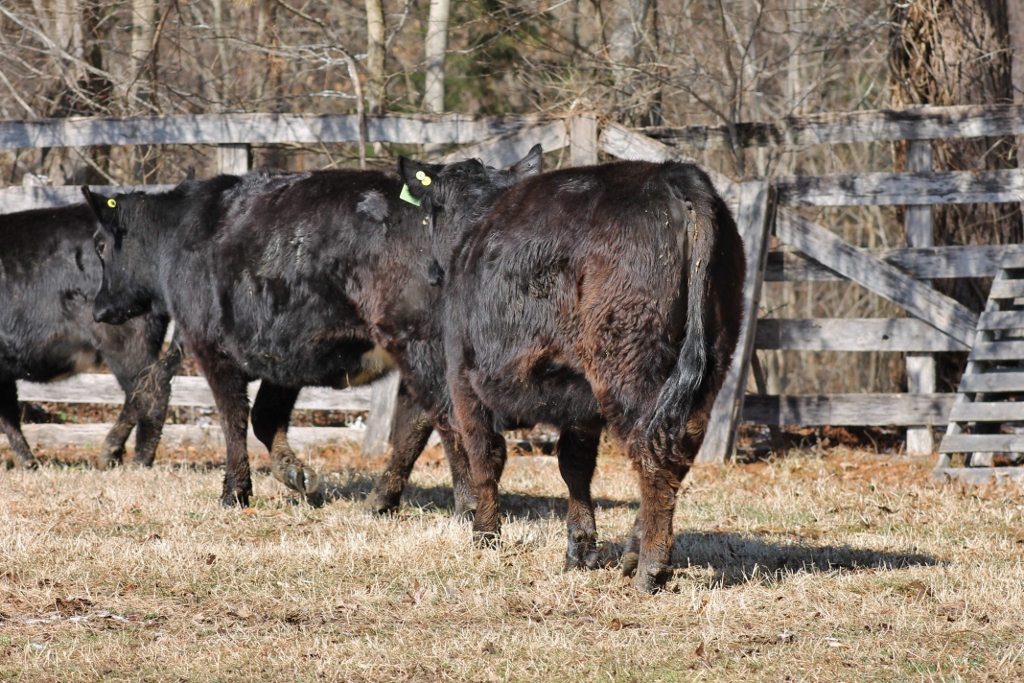 In the cold months, the farm switches to a “strip grazing” system to make use of the tall fescue which was grown in the fall months and saved or “stockpiled” for the winter. Strip grazing offers benefits similar to rotational grazing, but unlike a rotation in which animals are moved from fenced paddock to paddock, strip grazing entails setting up a temporary fenceline and moving the animals’ fenceline further and further down the paddock as the animals consume what is offered to them. Each time Whit and Jennifer move the fence and provide access to a fresh part of the pasture, the animals consume the available forage far more evenly and efficiently than they would if they had simply been turned out continuously on the entire area at once. 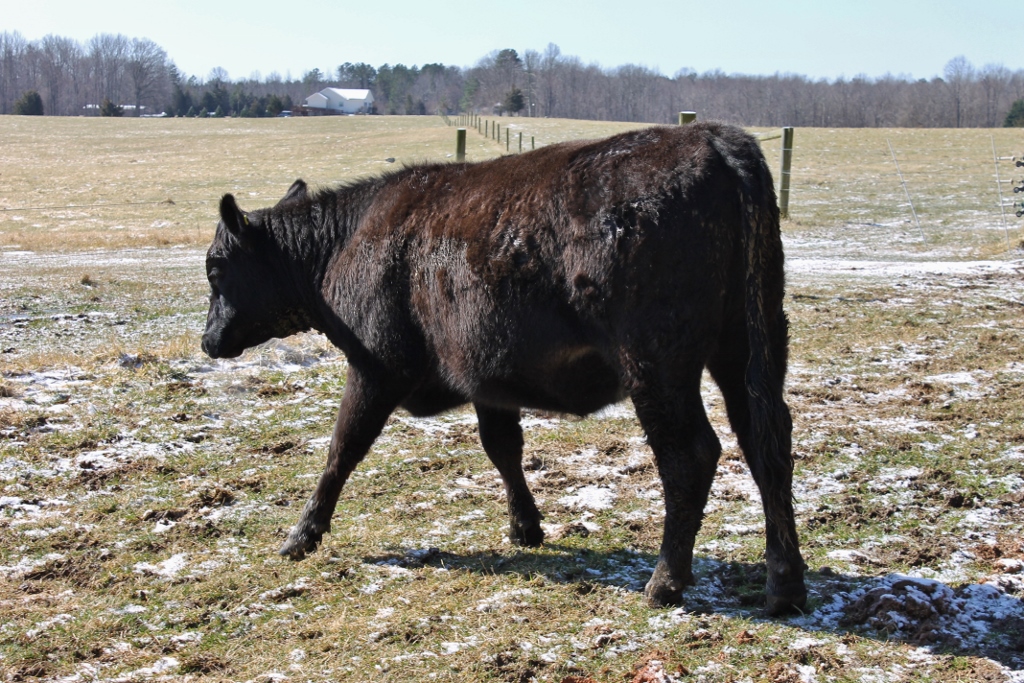 In a continuous grazing system, animals access the entire available pasture at all times, and, due to behavior and preferences, end up overgrazing some areas and underutilizing others, resulting in changes to both the health and the quality of the forages. Animals also tend to congregate and loaf in the same areas each day, concentrating nutrients from manure in these areas. To complicate matters, many parts of the pasture can never adequately rest from overgrazing and the stand of grass eventually becomes weak.

Both of the grazing strategies that Whit and Jennifer employ—rotation and strip grazing—have well-documented advantages over continuous grazing including more even nutrient distribution, higher pasture utilization, and more efficient use of available forages. Whit and Jennifer have also seen a significant downsize in hay feeding requirements because their management strategies create highly productive pastures and lengthen the number of days that forage remains available during the winter. 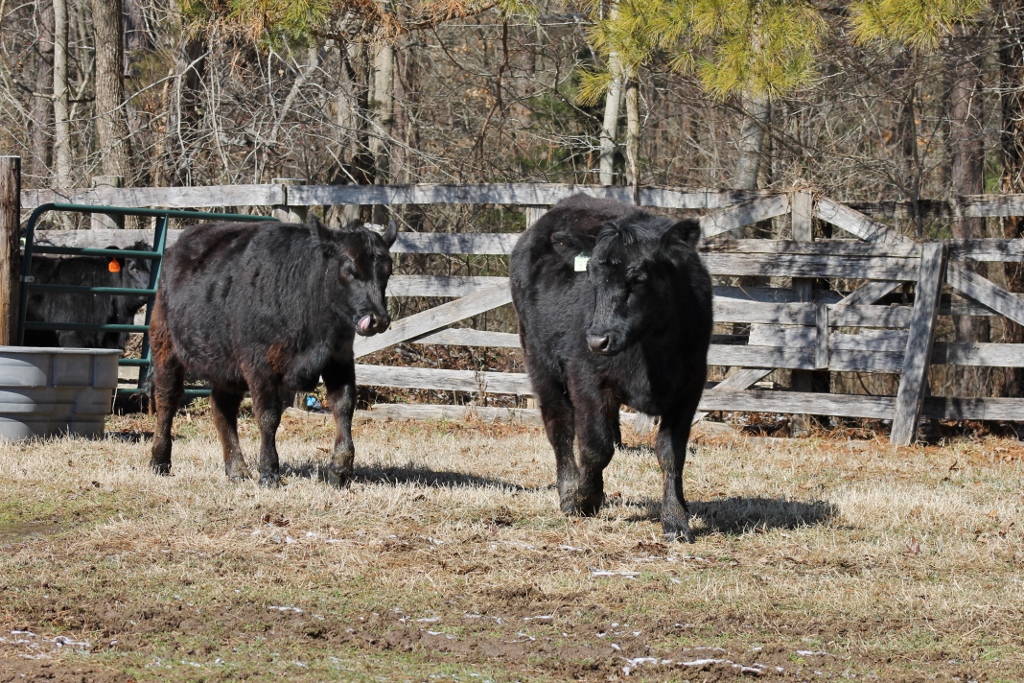 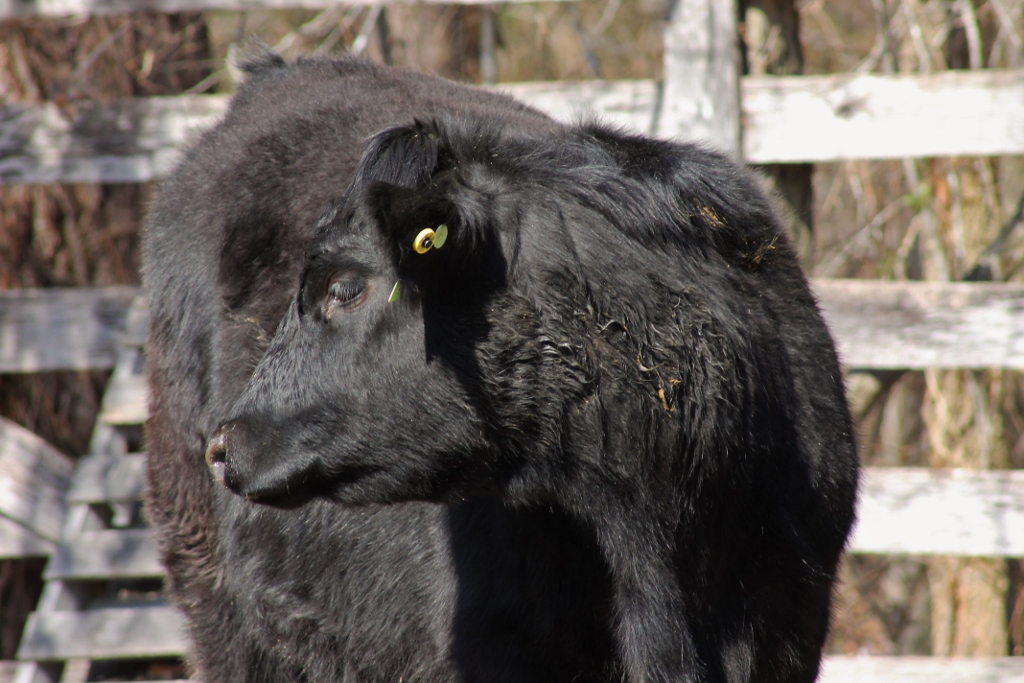 A cattle producer who does not have enough available pasture or who does not use a controlled grazing plan may end up feeding hay to pick up the slack during the summer, in the late fall, and all throughout the winter if the pastures become weak or overgrazed. This can quickly become expensive, and Whit and Jennifer have been grateful that their pasture management plan has brought relief from a portion of their hay costs. “We didn’t feed hay til the snow this year,” Jennifer notes. In a typical year, she also feeds some hay in the fall so that pastures can build some growth and later be used for winter grazing. “We might feed hay around the end of October or first of November while the stockpiled fescue is growing,” she says. 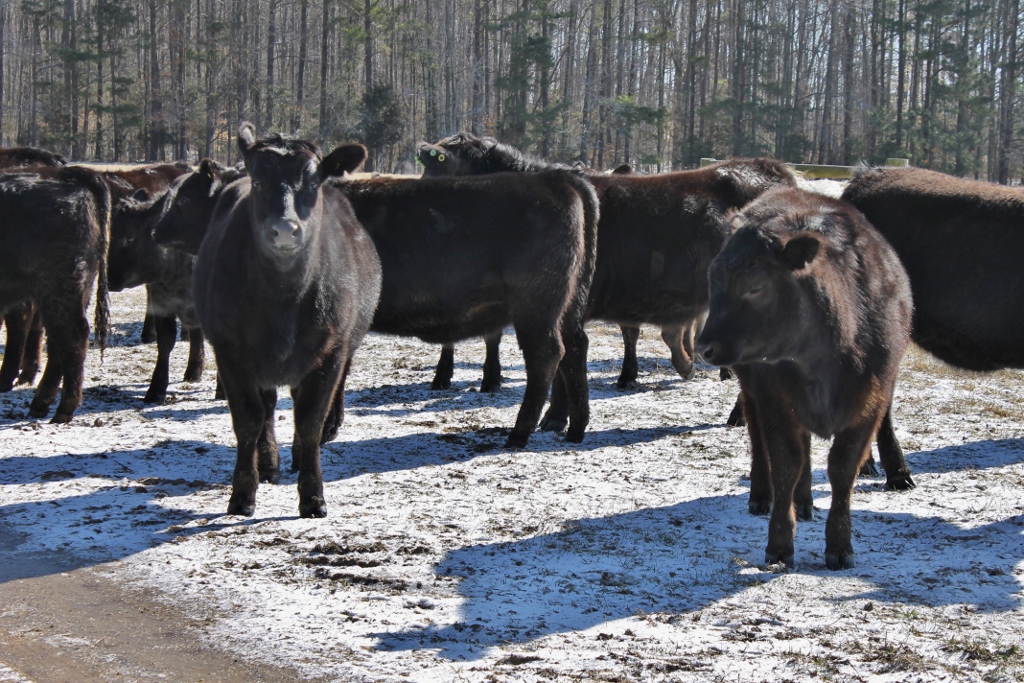 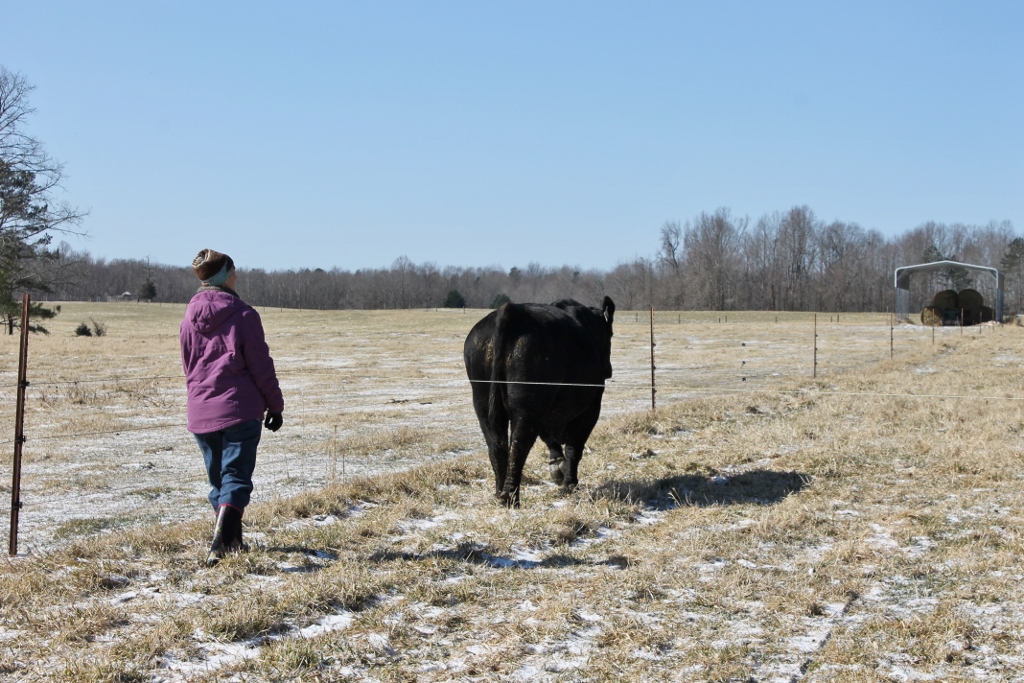 Enacting rotational grazing or strip grazing may sound like plenty of work on its own, but to Jennifer, it beats the labor and fuel associated with making hay. “We cut hay when absolutely necessary, and if we don’t need to cut it, we bush hog the extra to save the nutrients for later,” she says. In the business of raising cattle, “there’s enough work in it already with maintaining fences,” says Jennifer. 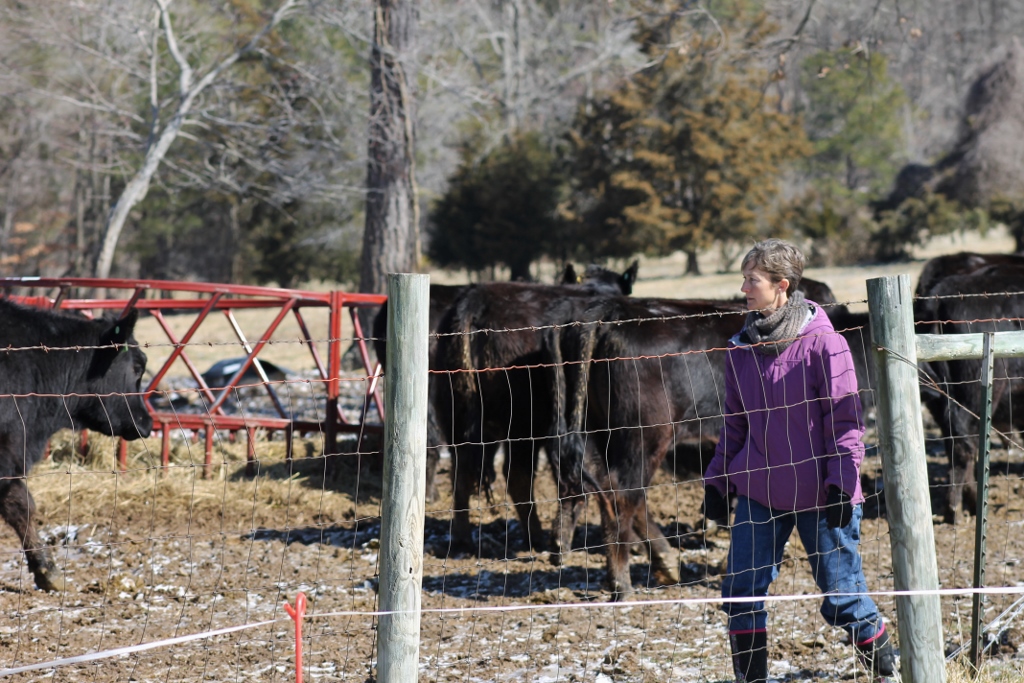 A good grazing plan may save on hay, but some people worry that adopting an intensive plan may rack up fencing costs in the short-term, trading away the economic benefits of reducing labor, fuel, and fertilizer for haymaking. However, Jennifer has advice for graziers who wish to adopt a sensible controlled grazing plan for the sake of reaping the long-term benefits. “Keep fencing simple,” she offers. “Use good outside perimeter fencing and cross-fence with a simple single wire—a few T-posts, a few wooden posts, and your wire. The worst that can happen is mostly some calves might get into the next paddock and graze more. It doesn’t have to be built to government specs.” 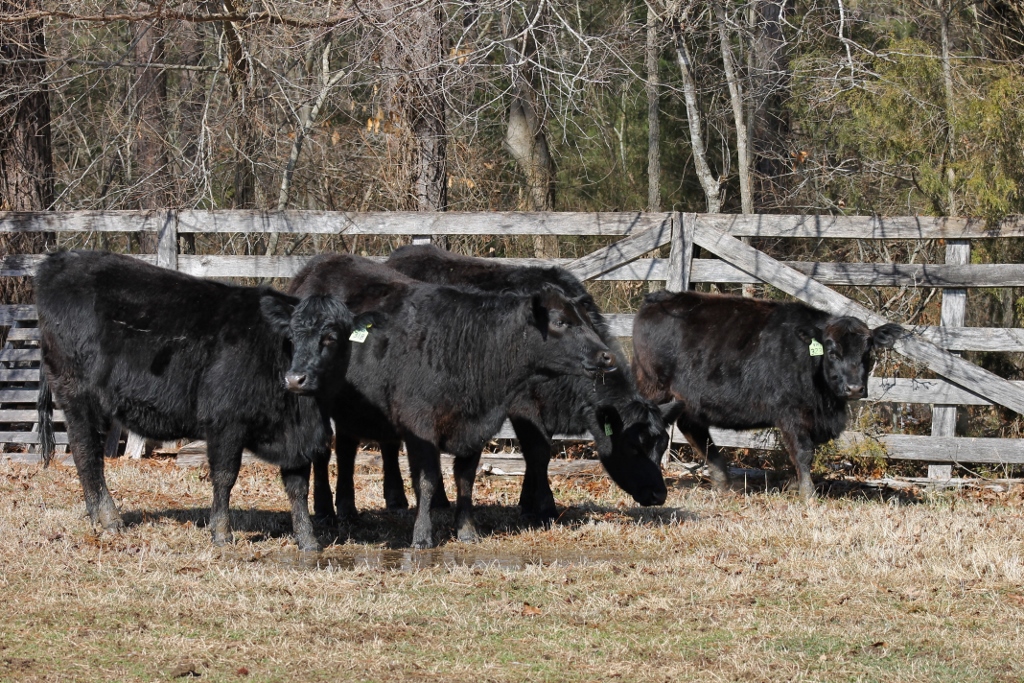 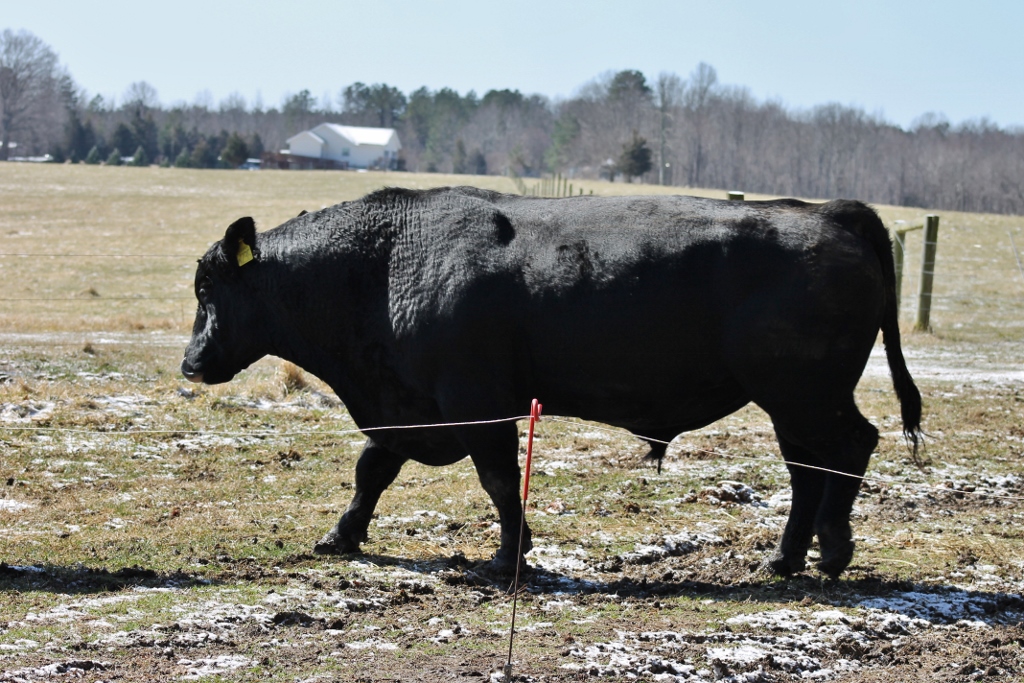 People who have limited time or who are not yet ready to jump on board with strip grazing can benefit even from simply dividing a pasture in half and rotating cows between halves—many who start this way later choose to subdivide pastures further, including the Morris family. “We went from one paddock to seven in Blackstone using the available water,” Jennifer says in reference to the developments she and Whit made on the farm soon after they purchased it.

What is next for the Morris farm? Whit and Jennifer hope to address some challenges plaguing herds in Southside Virginia including their troubles with fescue toxicosis, a problem caused by a symbiotic organism living in tall fescue grass which can cause physiological stress on cattle. For now, they provide as much shade as possible to relieve some of this stress in the summertime. In the future, Jennifer and Whit also would like to incorporate more clover into their pastures for both its nutritional benefits and its nitrogen-fixing abilities. Frost seeding may be on the agenda when winter comes back around. 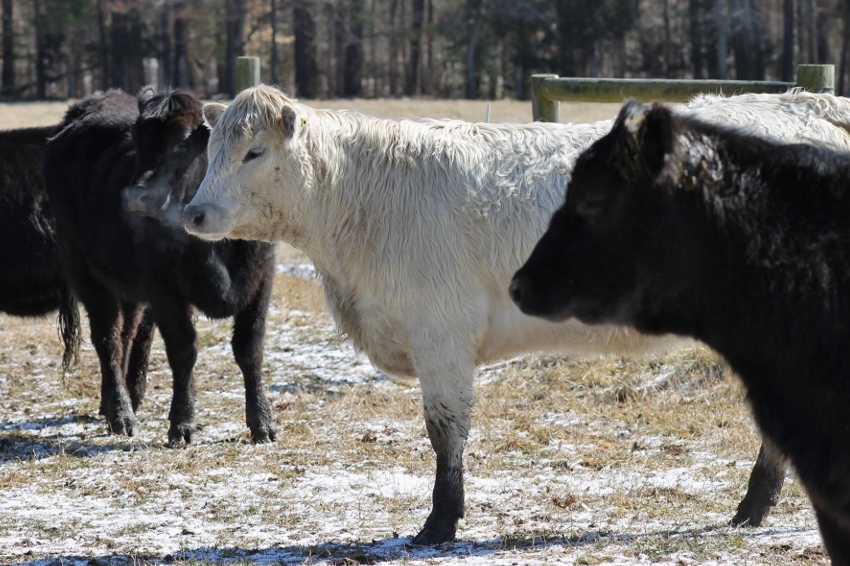 For now, the farm is thriving and the care and attention spent on grazing management is paying off. The farm has even recently been used as an educational resource during grazing schools offered by the Virginia Forage and Grassland Council and Virginia Cooperative Extension. The grass may have just begun to green up thanks to a cold, sluggish March, but come spring and summer, the pasture rotation will be in full swing, and the Morris family eagerly awaits the chance to get their cattle back on some good grass. To the animals, who have learned that the grass really is greener on the far side of the polywire, the presence of Whit or Jennifer coming to open the gate to the next field elicits equal excitement. 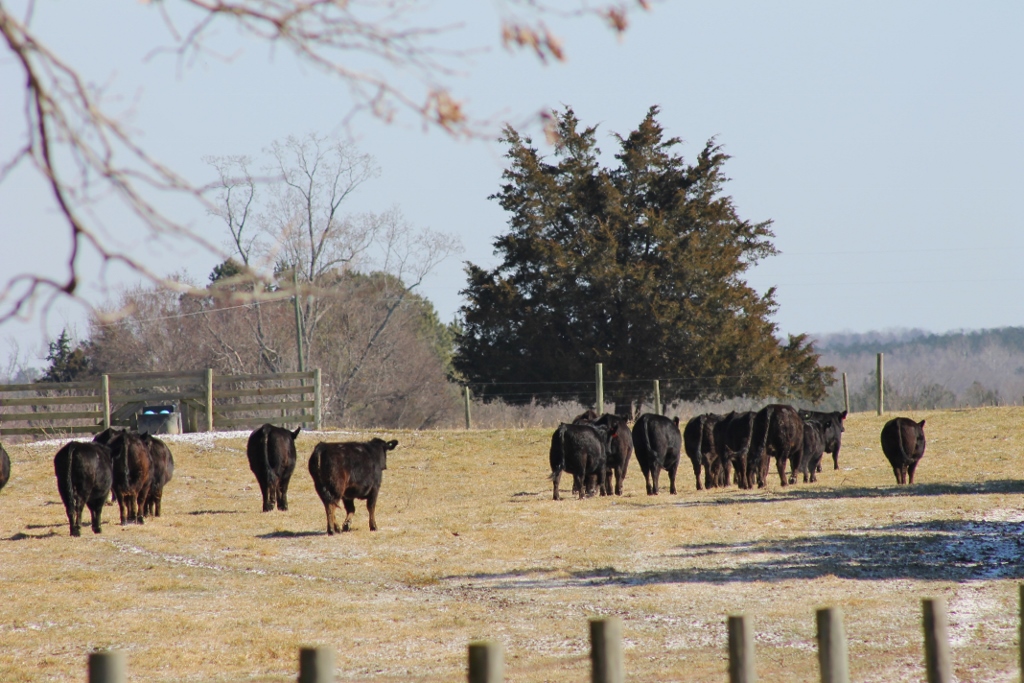