In general, we’ve had a good, but not great year for soybean in Virginia.  Although many areas were hit with a 3 to 4 week dry spell during July, August rains kept us in the game.  However, we did not see the ample  rains or cool temperatures that we experienced in August of 2017, which resulting in record yields.  Below is a summary of August rainfall and temperature anomalies for the U.S. 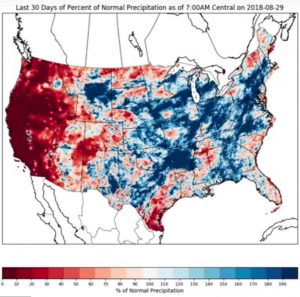 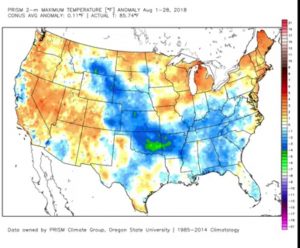 As you’ll notice,  we had about average or slightly below average precipitation and average to slightly above average temperatures for most of Virginia’s soybean growing areas.

So, I do not suspect that our yields will be as good as last year.  Still, our earlier-maturing varieties planted in April or May should yield quite respectably considering that most have made over 50% of their yield – they have reached the R6 stage (see photo below).  Yield of our later-maturing varieties, planted in May and early June, and our double-crop plantings are not quite there yet – much of our yield is yet to be determined – R5 soybean have only made roughly 25% of their yield at that time. 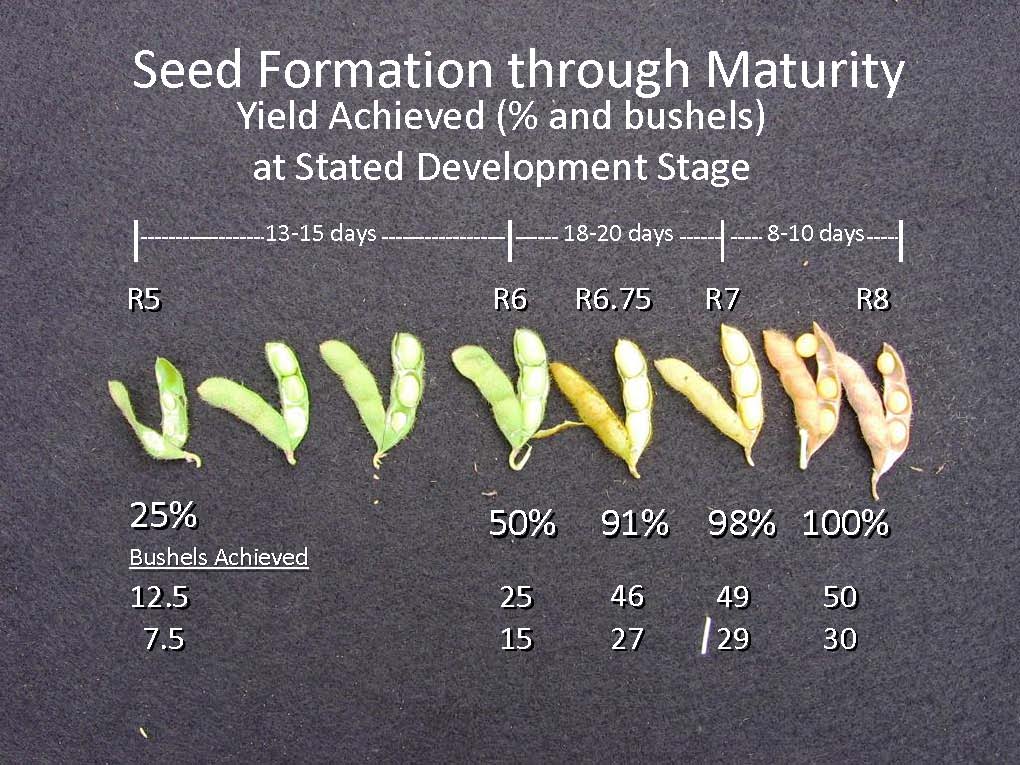 So, what do we need for good yields?  Rain is obvious.  Full-canopied plants with adequate soil moisture will draw about 0.25 inches of water/day from the soil.  But, we also need cool temperatures – soybean do not generally like 90+ degree days, especially when forming seed.

Below is the 10 day rainfall and temperature forecast for the U.S., and it does not necessarily look good for us.  Note that the rainfall is predicted accumulation and the temperature map shows anomaly.  Although we should get some rain this weekend only (more in northern parts), temperatures are supposed to be above average.  But, forecasts are only forecasts.  The weather does change.  I hope we will get the needed rainfall that they are predicting this weekend.  But a big ridge appears to be setting up over the Mid-Atlantic states for next week.  This usually means warm weather and only at the edges of ridges do we normally see rainfall – note the heavy rainfall predicted from Nebraska through Michigan. 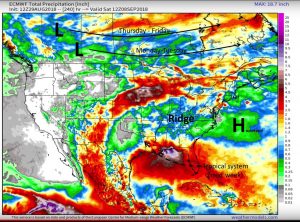 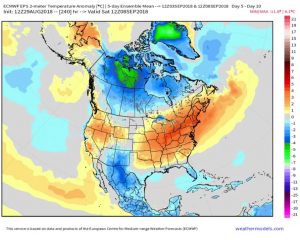 I don’t mean to discourage, just to inform.  We still have decent soil moisture, at least in the subsoil.  With rain this weekend, we should get through next week without too much harm to the crop.

Our double-crop soybean (assuming late maturity group 4’s and group 5’s planted in late June to July) are just now in the R5 stage – it usually takes 80 to 100 days from planting to reach R6, depending on maturity and planting date.  So some timely September rains will usually result in good double-crop soybean.

When will our yield be “made”?  Below is table showing the number of days to soybean physiological maturity (R7; 95% of yield has made).  When can we expect to be harvesting our soybean?  Full maturity is reached about 2 weeks after R7 and harvest can proceed after the soybean have dried down to a harvestable moisture, usually within a week after R8.