Location: Southern Piedmont AREC. We will not be at the main station, but park directly in the field. Look for signs between Blackstone and the main station on Hwy 40/Darvills Road. 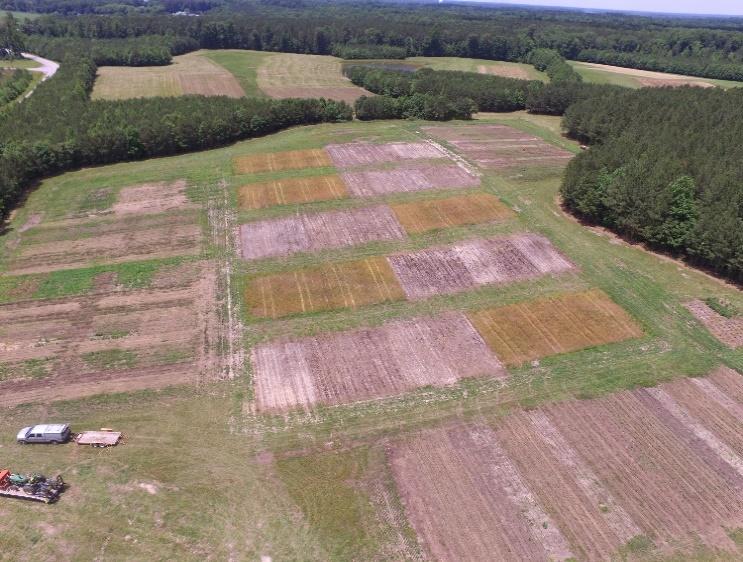 If you are a person with a disability and desire any assistive devices, services or other accommodations to participate in this activity, please contact Michael Flessner at (540-315-2954) during business hours of 8:00 a.m. and 5:00 p.m. to discuss accommodations 5 days prior to the event. *TDD number is (800) 828-1120.

The dicamba products Xtendimax, Engenia, and FeXapan had their registrations vacated June 3, 2020 by the U.S. Court of Appeals for the Ninth Circuit. The EPA announced June 8, 2020 a final cancellation order for these products.

Existing stocks, in possession on June 3, 2020 (the date of the court’s decision), can be used by farmers and commercial applicators by July 31. Use of these products must be consistent with the previously approved label.

The EPA’s full statement is here:  https://www.epa.gov/sites/production/files/2020-06/documents/final_cancellation_order_for_three_dicamba_products.pdf. Details on use of existing stocks are on page 11.

Tavium (dicamba + S-metolachlor) is also still legal to use. Tavium was not mentioned in the lawsuit making Tavium the only way to legally apply dicamba to Roundup Ready 2 Xtend soybeans or Xtendflex cotton. This product is already in short supply and may be difficult to acquire. Tavium cannot be used on double crop soybean.

There are effective alternatives to dicamba. In RR2 Xtend soybean, I recommend Flexstar GT in place of dicamba. This product is not currently in short supply, but there is potential for that to occur. So I encourage farmers that plan to use Flexstar GT to go ahead and acquire it. Other alternative products can be found in Table 5.54 on page 5-182 of the Pest Management Guide. Additionally, information on controlling Palmer amaranth in soybean is here: https://www.pubs.ext.vt.edu/2808/2808-1006/2808-1006.html and common ragweed is here: https://www.pubs.ext.vt.edu/content/dam/pubs_ext_vt_edu/spes/spes-143/SPES-143.pdf. In cotton, most varieties have the option of using Liberty, which is my recommendation in place of dicamba. But other alternative products can be found in Tables 5.112 and 5.113, starting on page 5-344.

Farmers should consider changing soybean herbicide traits for double crop acres or any soybean ground that has not yet been planted. LibertyLink, LLGT27, and Enlist are all good options in place of RR2 Xtend. Farmers may also consider a Roundup Ready variety as well, to potentially save tech fees compared to RR2 Xtend, but there are very few of these even before this announcement. I realize changing this late in the year may not be feasible and the best performing varieties may not be available. If farmers choose to change varieties, make sure that the variety has both strong yield potential and the herbicide trait of choice.

This ruling does not apply to dicamba products such as Clarity and Banvel, that are not labeled for use in Xtend traited crops, so these can continue to be used in pastures, corn, and other labeled uses. Dicamba products that are not labeled for use in dicamba-tolerant crops have been and continue to be illegal to use over-the-top of RR2 Xtend soybean and Xtendflex cotton.

This ruling comes at the absolute worst time during the season. There may be temptation to use dicamba illegally, but I strongly encourage us all to think about the implications of such actions on agriculture. These products have been and will continue to be under scrutiny from the non-ag public.

CANCELLED! Due to Virginia Tech’s response to COVID-19 and out of concern for everyone, we are cancelling all of these workshops. We will reschedule after field season in Nov. or Dec.

CCA credits will be offered

Free lunch to start or end the program!

If you are a person with a disability and desire any assistive devices, services or other accommodations to participate in this activity, please contact the Extension office listed above or TDD* during business hours of 8:00 a.m. and 5:00 p.m. to discuss accommodations 5 days prior to the event. *TDD number is (800) 828-1120.

The Eastern Virginia Agricultural Research and Extension Center (EVAREC) Soybean Field Day is this Tuesday, Sept. 24. The field day begins at 8:45 am and tours will begin promptly at 9:00 am. There are a number of different topics to be discussed, all supported by the Virginia Soybean Checkoff. The 2019 full-season soybean variety test will also be available for viewing. Lunch will be served by Nixon’s Catering. We look forward to seeing you there.

Program & Speakers in the Seed Lab

Thank You to Our Field Day Sponsors!

Mark your calendar and plan to attend! 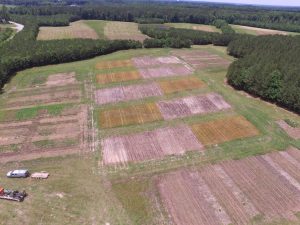 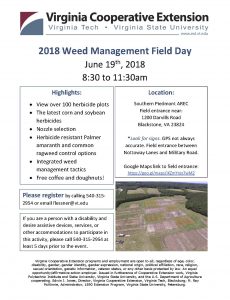 June is usually the time of the year when full season soybean is kicking into high gear and we begin planting double-crop soybean.  And like always, various issues are beginning to arise, whether its the weather or finding out mistakes made a few weeks earlier.

Unbelievably, double-crop soybean is wrapping up in many areas due to small grain maturing earlier than normal.  Out of necessity, we were forced to harvest wheat and plant soybean at the same time we were trying to make timely postemergence herbicide applications and generally trying to pay attention to the rapidly growing soybean that we planted in April and May.  But, issues such as these are not unusual.

This week, I thought I’d mention a few things that we are facing and continue to remind you of the need to plant as soon as possible and adjust seeding rates accordingly.

Planting Date.  We are now losing about 1/2 bushel per acre per day with each delay in soybean planting.  Plant as soon as possible, but don’t cause more serious problems by planting into too wet or dry soils.

Seeding Rate.  My data indicates that seeding rates now need to be at least 180,000 seed per acre, even on the best of soils.  I would bump those up about 20,000 seed for each week’s delay in planting.  See Soybean Seeding Rates for June and Later for more information.

Replanting.  Generally, replanting does not pay this time of the year (due to the planting date penalty) unless the stand is horrible.  For more information, see Soybean Replant Decisions or contact me.

Seed Treatments.  I’ve seen few benefits of fungicide or insecticide seed treatments this time of year.  Plants usually emerge and grow quickly.  The exception is wet soils – soybean will emerge very slow when soils are saturated.  With that in mind, you may consider a fungicide on the seed if you have poorly-drained soils, your soils are already wet, and rain is predicted.

Seeding Depth.  Those of you know that I usually don’t like to plant soybean greater than 1 inch.  But, I’ve found that planting soybean at 1.5 inch (and occasionally 2 inches) works just fine when soils are warm.  Sometimes, it’s better to plant deeper to hit moisture than to plant into dry soils.

Weeds.  First, Drs. Charlie Cahoon and Mike Flessner is who you need to consult regarding weeds, but here are a few of my observations.  We may have let a few weeds get too big for adequate control – this is especially a problem with glyphosate-resistant weeds.  Marestail continues to be a problem.  When this weed is glyphosate resistant and you’re not growing Liberty-Link soybean, about the only somewhat effective herbicide that we have left in our arsenal for Roundup Ready soybean is FirstRate, although a few other herbicides may burn the weed – just don’t expect very much from anything.  I’ll let you mull over your other options if you have planted Xtend soybean.  Finally, don’t depend on glyphosate alone – even if you weeds are not yet resistant, its a good practice to diversify to insure that they do not become so.