In the past few days, several people have told us that Cotoran is unavailable.  Naturally, the conversation turned to alternatives.

Cotoran was once used almost universally on cotton.  Prior to the mid-90’s, we basically told growers to buy the Cotoran first, and then buy the cotton seed.  We felt Cotoran was that important.  But, things have obviously changed in the past two decades, primarily because of Roundup Ready and LibertyLink.  And, we have some additional PRE (preemergence) herbicides today.  Although some growers still like and use Cotoran, the percentage of acres receiving Cotoran has decreased substantially.

In the absence of Cotoran, what are the alternatives where common ragweed is an issue?  Prowl, Staple, and Warrant have little to no activity on ragweed (see table below).   Brake F16, Direx, and Reflex, on the other hand, may not be quite as effective on ragweed as Cotoran, but they should still provide good control.  And, a mixture of Direx plus Reflex should be as good as Cotoran on ragweed.  Brake F16 contains a mixture of fluridone plus the active ingredient in Reflex.  Brake FX contains a mixture of fluridone plus the active ingredient in Cotoran.  Brake FX is registered for sale in Virginia and North Carolina although Brake F16 seems to be the material being most promoted by the manufacturer.  Brake FX should do a very good job on ragweed. 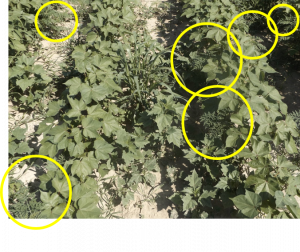 We had a trial in 2016 at a site heavily infested with common ragweed.  The weatherman cooperated, and we could not have asked for better herbicide activation.  Nevertheless, we had essentially complete ragweed control with Brake F16 and with combinations of Reflex + Direx, Reflex + Warrant, Direx + Warrant, and Direx + Staple.  Knowing that Staple and Warrant are poor on ragweed, that leads us to believe that either Direx or Reflex would be good alternatives to Cotoran.  If used alone, we suggest 1 pint of Reflex or 1.5 pints of Direx.  If tank mixed, we would suggest 1 pint of Direx plus 12 to 16 ounces of Reflex. 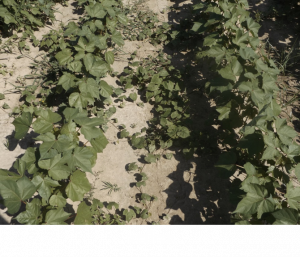 In this age of herbicide resistance, we routinely recommend at least two herbicides (two mechanisms of action) applied PRE.  The exception is high organic matter soils where Warrant, and to a lesser extent Staple, are the only products that work.  For mineral soils, and especially where Palmer amaranth is a problem, we will continue to recommend two or three mechanisms of action PRE.  The goal is to hopefully prevent resistance to our PRE herbicides, especially Reflex, and to improve overall control.

Reflex is one of many PPO inhibitors being used in multiple crops.  You have probably read in the farm press about the issues they are having in the Mid-South with PPO-resistant Palmer amaranth.  At least some of their populations are resistant to PPO inhibitors applied PRE or POST.  Obviously, we want to avoid that or at least delay its occurrence as long as possible in our area.  To do that, we need multiple mechanisms of action PRE followed by an effective POST program.

So, what does that have to do with common ragweed?  A ragweed population on the Virginia/North Carolina border has been confirmed as having multiple resistance to glyphosate, ALS inhibitors, and POST-applied PPO inhibitors.  Brandon Schrage, a graduate student at NC State, is in the process of determining if that population is also resistant to PPO inhibitors applied PRE.  Preliminary findings suggest it is.  That should encourage us to use a tank mix of Direx + Reflex if common ragweed is our problem.

After the PRE application, we can control glyphosate-resistant ragweed escapes with timely applications of Liberty, XtendiMax or Engenia (XtendFlex cotton only), or Enlist Duo (Enlist cotton only).  Envoke is also an option unless you expect ALS resistance.