It seems that everything that you read about soybean seeding rates is that we are planting too many seed.  In general, I agree – at least for full-season soybean.  We still seem to have that mindset that it takes 1 bag of seed per acre.  But many of you have been listening and are taking the seeding rate down to 100,000 to 120,000 seed per acre, with no noticeable difference in yield.   But, can you go lower?  And how low can you go?

To help answer this question, we have re-analyzed about 10 years of data that we collected from dozens of experiments conducted from 2003 through 2011. 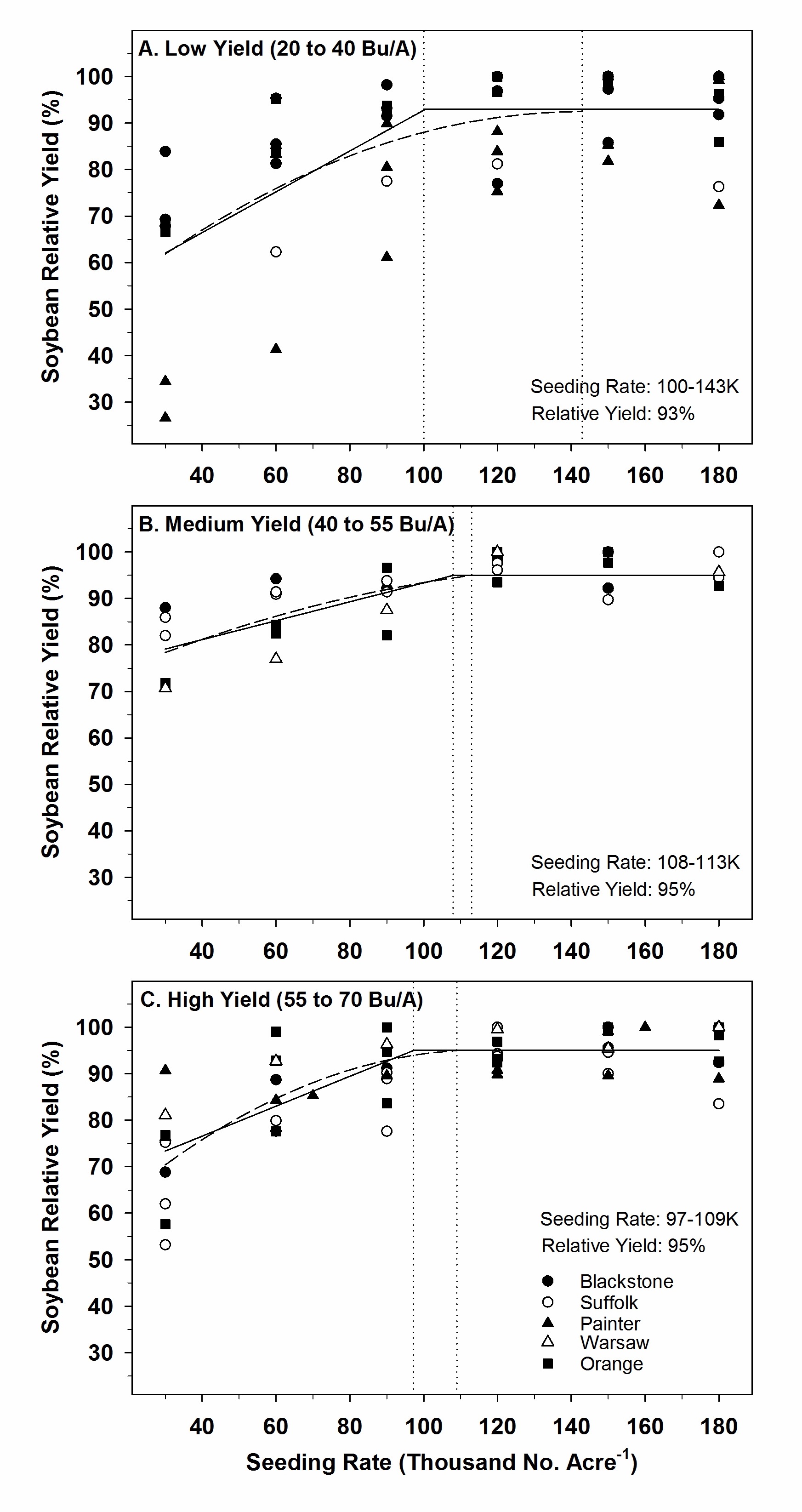 But instead of just looking at average yield response, we separated these responses into soybean yield potentials.

Why did we do this?  I’ve always thought that more seed is needed to maximize yield on low-yielding fields (or portions of fields) and less seed are needed or high-yielding fields or portions of fields.  Yes, this means that I’m asking you to spend more money on the least profitable fields and less money on the most profitable fields.  Still, this strategy will likely be more profitable over all acres.

There are a few things worth noting about the graphs to the left.  First, I’ve separated the data into low (20-40 Bu/A), medium (40-55 Bu/A), and high (55-70 Bu/A) groupings.  We decided on these levels by analyzing the data over and over at many different yield levels.  The resulting three levels were most stable and predictive.

Second, we used two statistical methods to fit a curve to the data to intentionally give us a range of seeding rates needed to maximize yield.  This allow us to recognize the variability in the data and reflects our confidence in the response.  Pay particular attention to the wide range of seeding rates necessary to maximize yield at the 20 to 35 bushel yield potential.  This reflects the yield variability and the variability in the response of yield to seeding rates that are common in low-yielding years or fields.  We just are not as confident in this set of data.  Some years or locations, we could get by with 100,000 seed/acre; in others, it took more than 140,000.  With the other yield potentials, the range is pretty tight.  In other words, I have more confidence in recommending 110,000 or even less than 100,000 seed/acre in these instances.

Finally, we see that it takes, in general, less seed at high yields – which verifies my earlier statement that less seed are needed for higher yield potentials.

So what have I settled on?  Below are my suggestions.

But, you may ask, “What about yields greater than 70 bushels per acre?  That’s a good question.  But, I cannot answer it confidently since we have little data in that range.  We are however conducting new experiments this summer to update our data.

But until that data is available, here are my thoughts.  I think that lower seeding rates will work until you get to the 100+ bushel yield range.  After that, I suspect that we are running low on reproductive nodes (node on the plant where pods can form).  For instance, if we only have 80,000 plants/acre, we would need 15 reproductive nodes containing 4 pods on every one of these nodes!  While this is possible, I’m assuming in this calculation that we will grow 2,500 seed/pound and 3.0 seed/pod. Taking that down to a more normal 2800 seed/pound and 2.5 seed/pod, that means we need 6 pods per node!  I think that we are starting the expect a little much from single plant in this case.

So, for 100+ bushel yield environments, I’d suggest to gradually increase your seeding rate from the ones suggested above.  I do understand that we have very few 100+ bushels fields, but I have seen parts of the field exceeding this when I’m watching a yield monitor.   An we commonly have plots within our small-plot tests exceeding 90 and 100 bushels.

Finally, am I suggesting that we may be able to vary our soybean seeding rate as we do corn?  Yes, I’m suggesting that.  We will be validating some variable-rate-seeding (VRS) on two farmer’s fields this year.  If you know of anyone who has VRS planters and who would like to participate in an on-farm test, let me know.

1 thought on “Soybean Seeding Rates – How Low Can We Go?”