Friday, Sep 7th, a pod-blasting clinic was organized in Windsor, Isle of Wight County in Virginia. Farmers brought samples for maturity evaluation from 40 fields, in majority from the IOW but a few were from Suffolk and Southampton. Samples were taken from fields totaling a minimum of 3100 acres of peanut. Based on the mesocarp color, we identified that one sample was ready to dig, 12 in a week, 15 in a week and a half (10 days), 8 in two weeks, and 4 in three weeks or more. This indicated that two thirds of these fields were ready for digging after this week and after the hurricane Florence has passed.

Peanut varieties planted were in majority Bailey and Sullivan with only very few acres of Wynne and Emery, the last being a new cultivar just released in 2015. On these checked fields, farmers did not irrigate and only one farmer used Apogee, a growth regulator that could have affected maturity. Defoliation due to leaf spot was almost absent in all fields, as it was rootworm damage.

The earliest to be dug, in no more than a week, were fields planted during the first week of May and receiving constant rainfall in June, July, and August. Note that precipitation received in July and August exceeded by far this year the multi-annual average for most fields. Some fields planted in mid-May and constantly rained out, also showed digging approaching in 7-10 days (picture below). 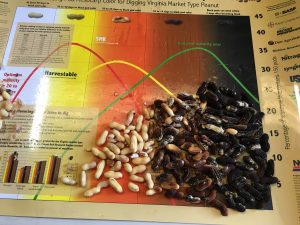 The only early May plantings a little behind, 10-14 days from digging, were fields with a dry June, regardless if for the rest of the summer they were wet; and the majority of fields planted in mid-May. Based on the color charts, the fields planted during the last week of May could wait three weeks or more before digging. Meanwhile, several other pod-blasting clinics will be organized to help farmers decide when and what fields to start digging with.

This result came to no surprise. It has been determined that Bailey requires about 2700 °F heat units (or GDD) to reach optimum maturity. The Cotton – Peanut Infonet online service provided by Virginia Tech here https://webipm.ento.vt.edu/cgi-bin/infonet1.cgi shows that by Sep 7th peanut planted on May 1st received 2649 °F in Suffolk, 2637 °F at Capron in Southampton, 2718 °F at Skippers in Greensville, and 2640 °F at Waverly in Sussex. Researchers at the University of Georgia determined that every event of rainfall and irrigation received by a crop at one inch or above has an effect equivalent with 10 °F heat units and can speed up peanut maturity. If so, 100 or 200 heat units are to be added to those measured by the thermometer.  Indeed, under the conditions of this year early May planted peanuts are expected to be ready for digging 7 to 10 days sooner than last year.