This will be final trap catch alert of the year for the sweet corn IPM program as most corn has been harvested. I want to thank all of the VCE Extension folks who monitored traps on farms in their respective counties this year: Phil Blevins (Washington Co.); Chris Brown (Franklin Co.); Jason Cooper (Rockingham Co.); Ursula Deitch (Northampton Co.); Helene Doughty (Eastern Shore AREC Entomologist, Accomack Co.); Roy Flanagan (VA Beach); Bob Jones (Charlotte Co.); Kenner Love (Page and Rappahannock Co.); Laura Maxey Nay (Hanover Co.); Steve Pottorff (Carrol Co.); Stephanie Romelczyk (Westmoreland Co.); Beth Sastre-Flores (Loudoun Co.); Laura Siegle (Amelia Co.); Rebekah Slabach (Halifax Co.); and Mark Sutphin (Frederick Co.).
Click on the table below to view the trap catch results (moths per night) for some of the locations around Virginia for this final week. We will send out a synopsis of the season this winter. We are still seeing some high corn earworm moth activity on the Eastern Shore of Virginia, Westmoreland County on the Northern Neck, and Frederick County in the northwestern portion of our state. With the hot weather that we’ve experienced the past 2 weeks, moth activity has probably been a little higher than usual for September. Sweet corn growers are advised to keep control measures (spray intervals) as they were during August in most counties.
We still have caught very few fall armyworm moths in our traps around Virginia; however, this insect could contribute to some infestations in the ears of late corn. In an effort to fend off any more pyrethroid insecticide resistance development in our corn earworm populations, rotating to another insecticide than a Class 3 (pyrethroid) is highly encouraged for at least one spray. Diamide insecticides such as Coragen or Besiege, the carbamate Lannate LV, or the spinosyn Blackhawk, are all effective non-pyrethroid options. 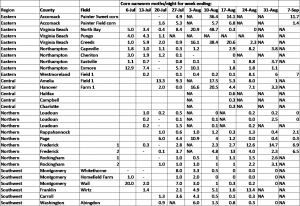 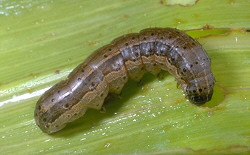