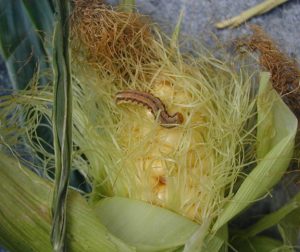 Corn earworm (Fig. 1) and fall armyworm are two important pests of a number of agricultural crops in Virginia. Sweet corn, in particular, is extremely vulnerable to attack by the larvae (or caterpillars) of these moth pests. Monitoring moth catch in pheromone-baited traps can help IPM decision-making. Corn earworm is monitored using Heliothis traps (Fig 2). Pheromone lures are changed once per month and traps are monitored every few days. In general trap catch less than 1 per night means relatively low pest pressure and sprays can probably be spaced 5-6 days apart during silking. However, a catch of >1 or >13 moths per night means moderate and high pest pressure, respectively, and a more frequent spray interval is justified.
For fall armyworm, pheromone-baited bucket traps (Fig 3) are used to alert growers to the arrival of this late summer migrant from the South and its relative pest pressure. 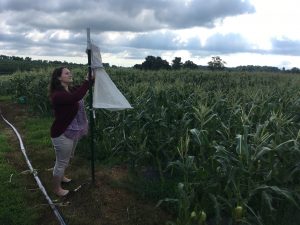 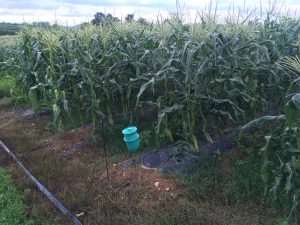