The 2020 Four Rivers Agricultural Conference will be held Tuesday, Jan. 14 at Providence Forge Recreation Center: 9900 Carriage Rd, Providence Forge, 23140. This year’s conference will include pesticide certification training, several Specialists and Agents from Virginia Cooperative Extension that will cover a wide variety of topics, and others. In addition, you will be able to get your dicamba herbicide certification with training being offered by Don Cline of BASF. We look forward to seeing your there for a great day of learning and interaction with the experts. Lunch will be provided. Agenda detail are below.

11:00     2nd round of registration for those not needing pesticide recertification credit

1:45        What I learned from Argentina Agriculture, pest control and nutrient management –Paul Davis

Manganese (Mn) deficiencies are common in Virginia soybean and are starting to appear in numerous fields.  These deficiencies are not necessarily due to low Mn levels in the soil, but are more likely related to high soil pH levels, as its availability decreases with increasing soil pH.

Although soils with a pH of 6.2 or lower can occasional show Mn deficiencies, it is most likely to appear when pH levels reach 6.5 or above.  Furthermore, Mn deficiencies are more common on our sandier soils because pH changes more rapidly and these soils typically have a lower concentration of the nutrient.

The deficiency will appear as interveinal chlorosis, usually on the younger leaves first since Mn is not a mobile nutrient. 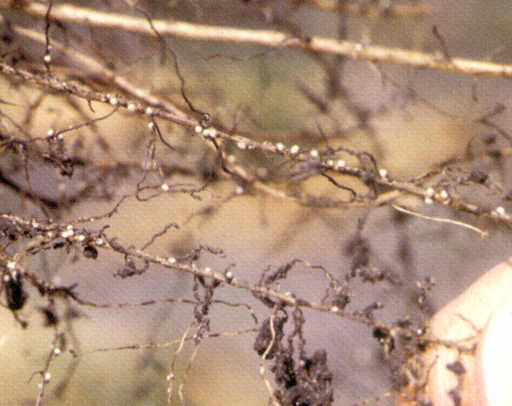 Other problems can cause look-alike symptoms similar to Mn deficiencies.  In particular, interveinal yellowing is a common symptom of soybean cyst or other nematode damage.  Therefore, it may be prudent to further investigate the problem, especially the root system.

Don’t spray if you don’t need it.  In addition to the cost, Mn can be toxic to soybean.  Spraying greater than recommended rates or spraying as a preventative spray when soil pH is relatively low (5.7-5.9) could lead to toxicity problems