The warm and wet September combined with early planting of early-maturing varieties have led to some rather severe seed quality problems in soybean this year.  Our harvest to date indicates that seed quality in our Northern Piedmont is pretty good, but declines as one moves south.  There also seems to be a good correlation with lack of rotation, earlier maturity groups, and earlier planting showing most of the problems.  The issues can usually be attributed to the diseases phomopsis seed decay and purple seed stain, which I’ll describe in more detail below.  Other diseases such as Alternaria, anthracnose, and frogeye leaf spot can also cause seed discoloration and quality issues, but are less common.  The bottom of the plant usually has more seed decay than the top.  But if harvest is delayed, the entire plant will be infected.

Phomopsis Seed Decay.  When soybeans mature during warm and wet conditions, we can expect seed quality to deteriorate.  Because this disease develops more rapidly on plants that are maturing under warm and wet conditions, we usually have more problems with early-maturing varieties.  We can however have seed decay on our later- maturing varieties if October is warm.  Although pods can be infected earlier, seed decay does not usually begin until after physiological maturity (R7). 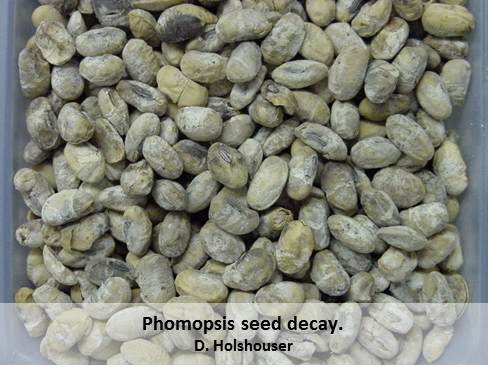 racked.  Severely infected seed may appear white and chalky.  The fungus secretes enzymes that degrade the seed coat proteins.  Test weight can be lower.  High occurrence of these seed can lead to discounts or rejection.

There are a few things that can be done to reduce the disease incidence.  It resides in the soil and on infected residue.  So, rotation is very important.  More decay will occur in a crop deficient in potassium, infected with viruses, and heavily attacked by insects.  Later-maturing varieties and later planting dates that delay maturity into the cooler parts of the year will reduce the incidence.  Still, timely harvest is the best management strategy.  The longer you leave the soybeans in the field, the worse the disease.  So, only plant as many early varieties as you can harvest in a timely manner.  Foliar fungicides will decrease the incidence of seed decay if applied from pod development (R3-R4) to early seed filling stages (R5).  My experience is that a single R3 will do little to prevent seed decay; it will usually take a second application at R5.

Purple Seed Stain.  Purple seed stain is caused by the organism Cercospora kikuchii, the same organism that causes Cercospora blight.  Before maturity, fields with Cercospora blight can be recognized by reddish leaves and reddish purple blotches on the stem and leaf petioles.  When severe, defoliation of the upper leaves of the plant will take place.  In many cases, the blotching progressed up the stem and to the pods. 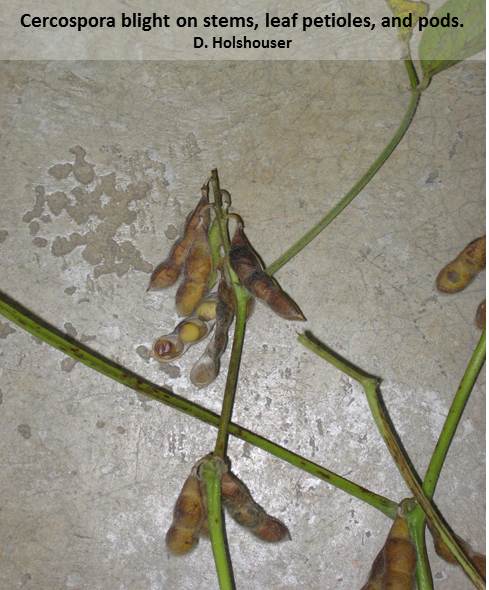 Dark, nearly black pods may appear on some varieties.  Once it progresses to the pods, there is a higher likelihood that the seed will be stained.

Purple seed stain is very noticeable.  The seed will contain pink to pale purple to dark purple splotches, which can cover the entire seed coat.  The purple stain itself does not reduce yield, but seed with nearly 100% discoloration may be lower in oil and higher in protein.  A lot of staining can result in discounts.  Germination of seed with 50% or more staining will likely be delayed.

Usually, the disease first appears on the plant during early seed development.  If conditions are right (average temperatures over 80o for several days), then the disease will build up rapidly.  Other weather factors do not generally affect seed 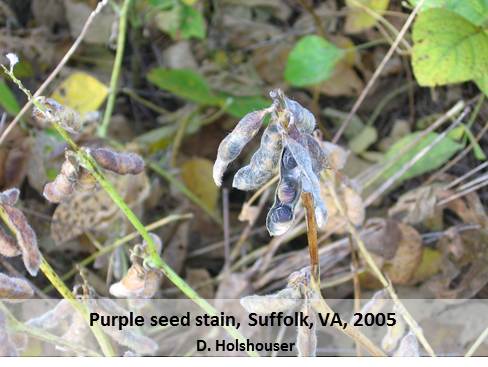 Other control measures include variety selection, planting high quality seed free of visual staining, and fungicides.  Varieties differ in their susceptibility of Cercospora kikuchii, but that information is rarely available in seed catalogs.  We routinely evaluate purple seed stain in our variety tests.  Fungicides will give some control if applied during pod or seed formation.