Yields are coming in from our variety tests – yields are good, not great, but good, ranging from the upper 40’s to low 70’s.  I hope to get a summary of the maturity group (MG) 3 and 4 tests out soon.  Be looking for them.

In the meantime, a questions that continues to arise if “What is the best maturity group for my farm?”  Or “What’s the best maturity group for my field?”  This is a very valid question.  Some years MG 4’s will shine and other years the MG 5’s are best.  Occasionally, MG 3 or 6 look good (the 6’s have been performing very well lately – as long as the frost holds off until mid-Nov!

An attempt was recently made (and published) to redrawn the MG lines in the U.S (Mourtzinis and Conley, 2017) – see the map to the upper right.  The researchers used variety test data from nearly all states to come up with the map shown.  While this map is more-or-less accurate when looking at the U.S. as a whole, it is not when you look closer (i.e., at individual states).

To better answer your questions regarding MG’s in Virginia, we took 10 years of our variety test data (around 15,000 plots) and began evaluating the probability of:

Results are shown in the following graphs. Note that we split the results into full-season and double-crop soybean.  We have also divided each MG into early-, mid-, and late-RM’s.  The total bar height answers question 1 – the probability that the RM does at least as well at the others.  For instance, as expected, there is an 80 to 100% probability that MG 5’s will yield at least as much as other relative maturities in Blackstone (Southern Piedmont, droughty clay soils).

Of course the “devil is in the details”.  There are soil properties and environmental conditions that control which RM is best in a given year.  If interested, contact me; I’ll give you my preliminary thoughts on that.  Rainfall is definitely the biggest influence – not how much we receive but when it falls; but that is random in Virginia.  There are other issues. 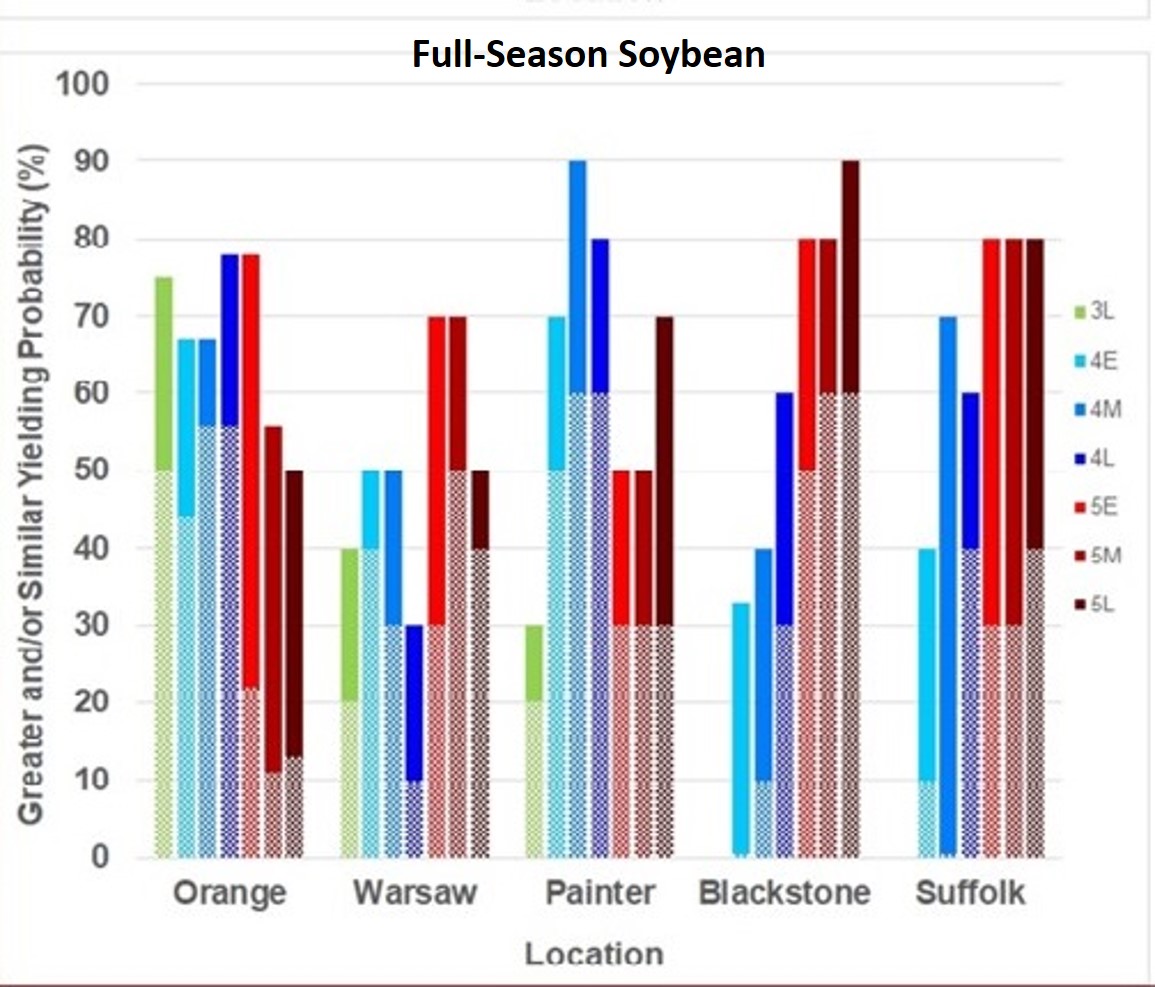 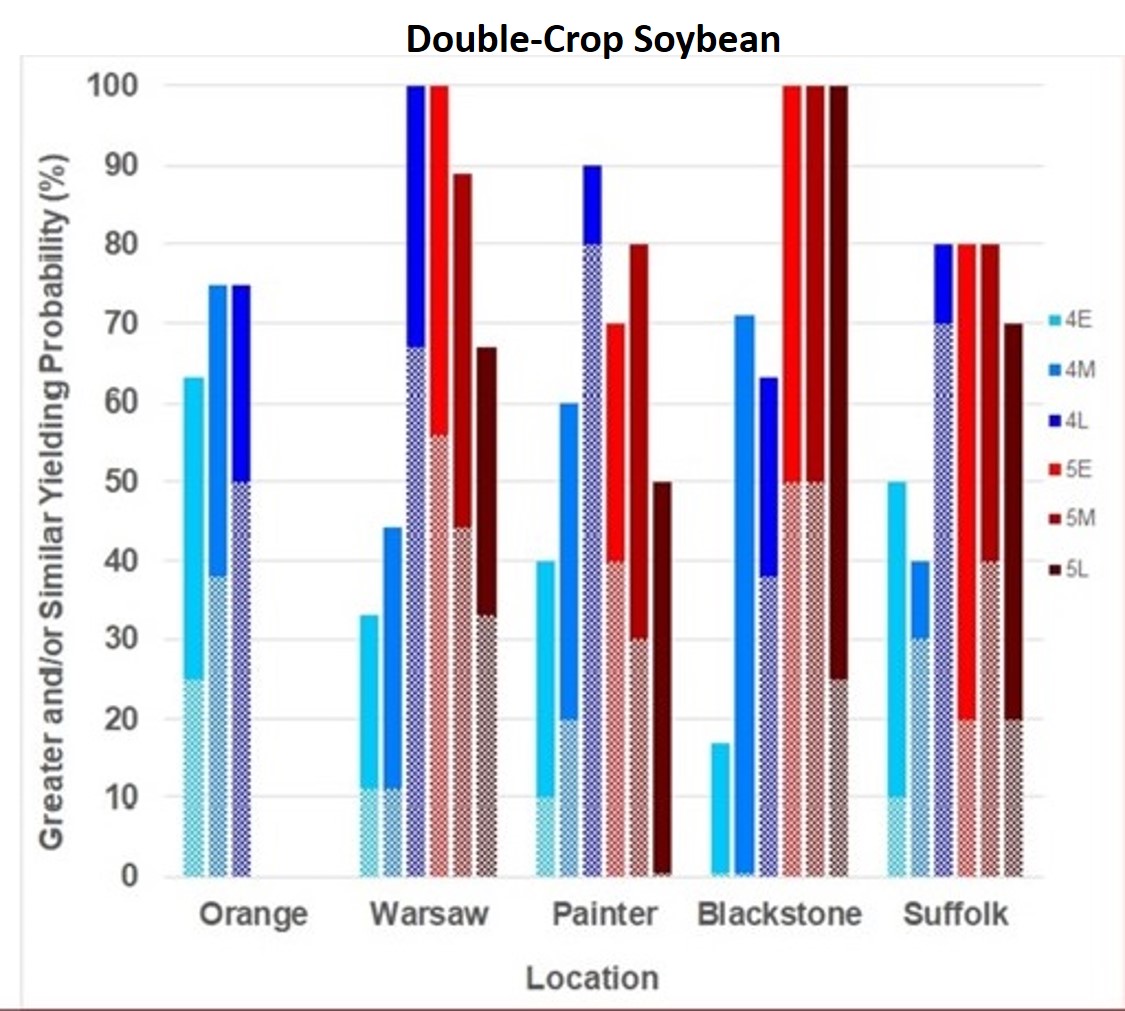 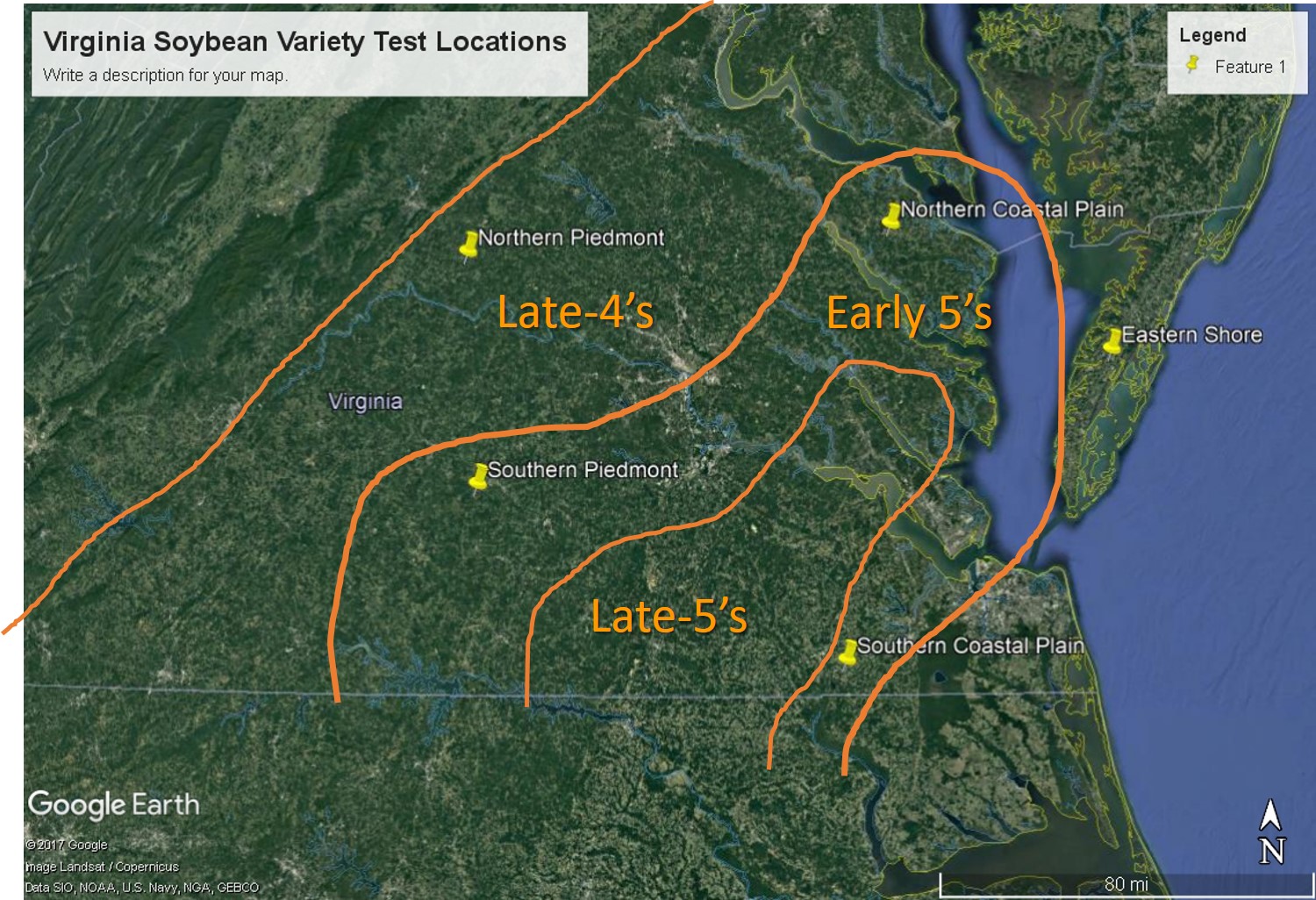 1st Attempt at a Relative Maturity Map in Virginia

I’ve made an attempt at drawing a Virginia map.  But do not read too much into this!  This is based only on 5 locations (although 10 site-years and thousands of plots at each location) and the “devils in the detail”.  An I did not use GIS to draw this map (the lines are not 100% accurately located).

Do not assume that I want you to plant only these RM in these areas, only that these tend to do best in most years.

How do you use these data?  Make most of your chosen varieties fit these results.  However, allocate a smaller acreage to those RM’s that can occasionally break records.

On a closing note, these data also indicate that early RM’s do better on our best, most productive land.  But, that’s a topic for next week.