Wheat is beginning to flower throughout Virginia, so it is time to make decisions about fungicide applications for both Fusarium head blight (FHB, also known as scab) and to protect the flag leaf as the grains begin to form. Currently, the risk for FHB is low in most parts of Virginia, even for susceptible varieties. The FHB Risk Assessment Tool can be found at http://www.wheatscab.psu.edu. Keep in mind that this is a prediction tool and it will not predict FHB outbreaks 100% of the time. A current screen shot of the website is shown below. Rains are expected over the weekend, but dry weather over the past several weeks has not favored spore production by the FHB fungus, so risk of FHB infection is expected to remain low for wheat that is flowering over the next week. However, now may still be the time to apply fungicides for foliar diseases including stripe rust, powdery mildew, and leaf blotch. The flag leaf must be protected during grain development to maximize yields. Again, due to the dry weather some areas have very little disease, and scouting is still recommended prior to making a fungicide application. However, there have been numerous reports throughout the region of outbreaks of stripe rust (especially on Shirley) and powdery mildew. Do NOT apply a strobilurin or fungicide pre-mix containing a strobilurin after flag leaf emergence (Feekes 9) since this can increase DON contamination in the grain. Prosaro, Caramba, and Proline are the most effective products for reducing scab and DON contamination, and these fungicides will also control foliar diseases such as leaf blotch, stripe and leaf rust, and powdery mildew. A fungicide efficacy table for wheat can be found in a previous post. 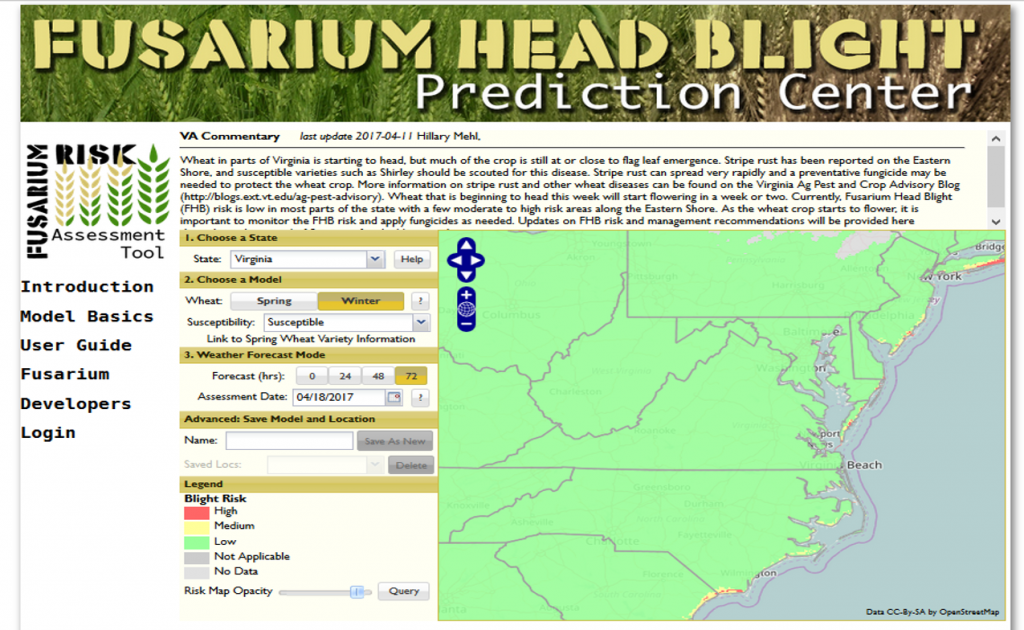 Screen shots from the Fusarium Head Blight Risk Assessment Tool (http://www.wheatscab.psu.edu) on April 20, 2017. Currently, risk of FHB infection in wheat that is flowering is low in most parts of Virginia. The exception is along the Eastern Shore where conditions are typically more humid and favorable for spore production by the FHB fungus. For susceptible varieties such as Shirley, FHB risk is moderate to high in some areas. However, for moderately resistant varieties such as Hilliard, the risk is currently low. This illustrates the importance of variety selection in management of FHB and DON contamination in wheat.