FHB risk is increasing in Virginia and will continue to increase over the next several days. Risk is highest on the Eastern Shore, but susceptible varieties such as Shirley that are flowering over the next week will be at moderate to high risk in many portions of the state. Growers should monitor the FHB risk tool (www.wheatscab.psu.edu) as their wheat crop begins to flower. Consider applying a fungicide if risk is moderate to high, especially on susceptible or moderately susceptible varieties. Wheat that has completed flowering is no longer at risk. Fungicides should be applied at early flowering or up to one week later. Do not apply a strobilurin-containing fungicide since this can increase DON contamination. Recommended fungicides include Prosaro, Caramba, and Proline.

Steve Rideout, Extension Plant Pathologist at the Eastern Shore AREC, confirmed stripe rust on research plots of Shirley on Monday. FHB risk continues to be high on the Eastern Shore, so growers in this part of the state with varieties that are susceptible to stripe rust should consider an application of Prosaro, Caramba, or Proline since these will control both FHB and rust. 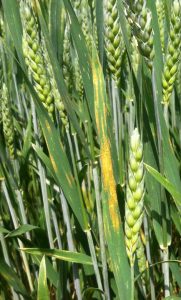