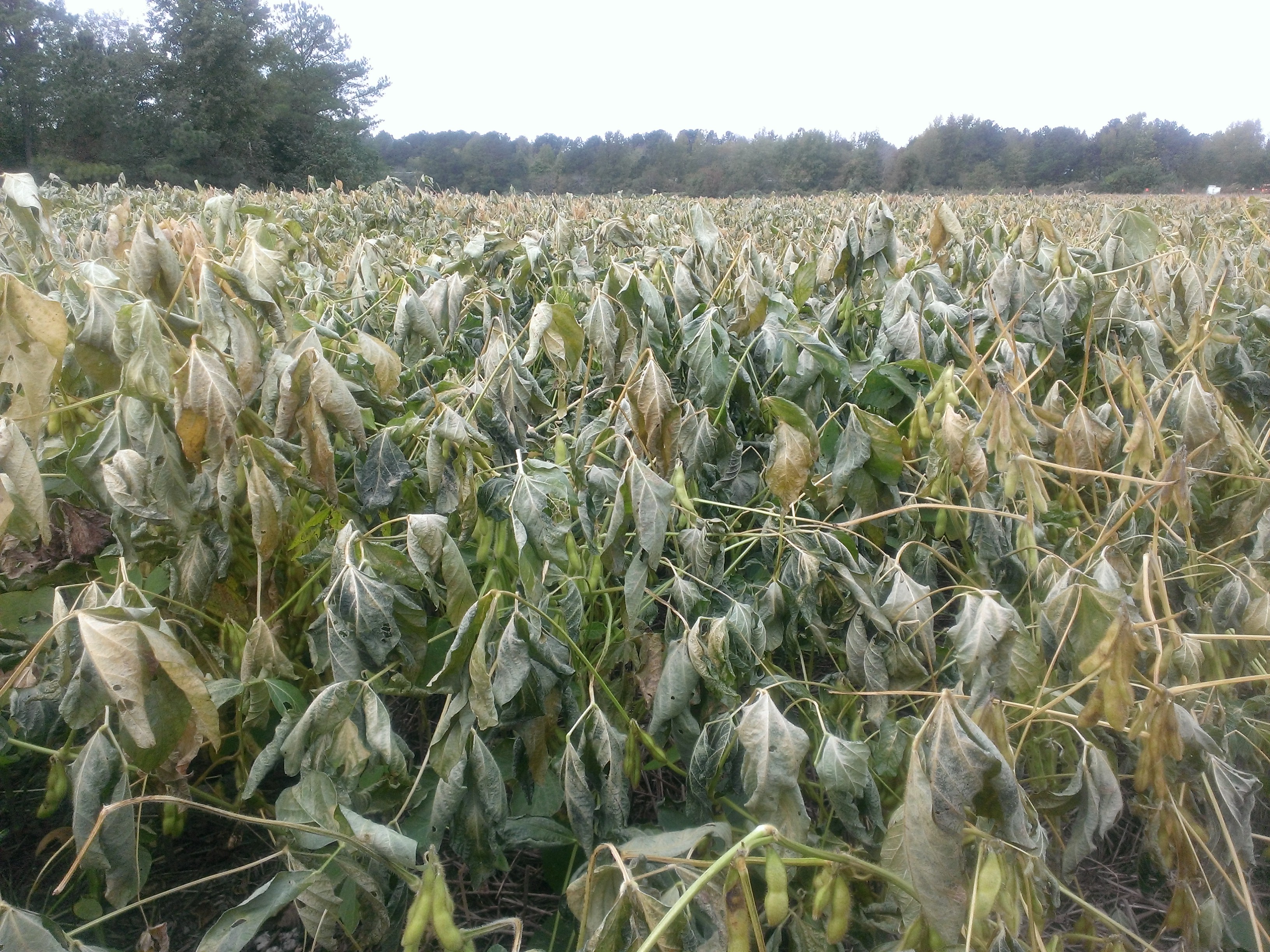 As a review (maybe a disclaimer?), I did suggest that we continue planting soybean though mid-July because I’ve seen some pretty good yields (in the 30’s) from July-planted soybean.  But, planting after mid-July is always risky.  With a relatively warm and sunny August and September, late-July and even August-planted beans can catch up and mature before the frost – if the frost waits until early-November.  Of course, this year was neither warm or sunny and our first frost came in late-October.  Maturity was slowed.  The end result is frost- and freeze-damaged soybean.

We are experiencing several scenarios:

Regardless of the scenario you may be experiencing, there are some management tactics that you can use to minimize further damage.  Instead of spelling out all of these tactics myself, I’ll borrow an article from Mike Staton, Michigan State University Extension Educator.  He is probably more experienced with frost/freeze-damaged soybean than I and he has summarized the issue well.

This article will help soybean producers reduce the adverse effects of an early frost.

The late planting season combined with some early frost events has increased the potential for frost damage to occur in soybeans this fall. The following recommendations from Michigan State University Extension will help you reduce the adverse impacts in the event that some of your soybean fields are damaged by frost.

Frost-damaged soybeans are generally considered salvageable as long as the plants reached the R6 growth stage at the time the killing frost occurred. The R6 growth stage occurs when the beans completely fill one pod at one of the upper four nodes on the main stem on 50% of the plants in the field. In dense, green soybeans, frost/freeze damage kills the upper leaves but rarely penetrates deeply into the canopy when temperatures remain above 30o F. However, once the upper leaves have been damaged, subsequent freeze events will penetrate deeper into the canopy. Once the plants reach the R7 growth stage, yield reductions due to frost/freeze injury will be minor. The R7 growth stage occurs when one pod on the main stem has attained its mature color on 50% of the plants in the field.

Frost-damaged beans will probably be wetter than normal and more difficult to thresh. Your first step in adjusting for this condition is to reduce the concave clearance. If acceptable threshing still does not occur, increase the speed of the cylinder. Make incremental adjustments and check your progress after each adjustment.

Soybeans that experienced severe frost/freeze damage extending well into the crop canopy will dry down slowly. In this case, producers should avoid significant harvest delays by harvesting frost-damaged fields at moisture levels between 16 and 18%. Data from the University of Wisconsin showed that shatter losses of 0.2 bushels per acre per day occur after the beans reach 16 to 18% moisture. The beans will need to be dried to a safe moisture level for storage (12% for 6 months). Electronic moisture meters tend to underestimate the moisture levels in green and immature soybeans so remember to add 1.5 percentage points to the moisture meter readings when testing mixtures of green, immature and mature beans and adjust drying times accordingly. In fields where only the upper leaves were damaged by frost, producers should wait and allow the beans to mature and dry to 14 to 15% in the field if possible.

If only 2 to 3 points of moisture need to be removed, the air temperature is above 60o F and below 75% relative humidity; no supplemental heat is required in drying bins equipped with full perforated floors and fans capable of producing one to two cfm/bu. However, drying will occur slowly. Drying times depend on initial moisture content, air flow, grain depth and weather conditions. Aeration fans should be run continuously as long as the beans are above 15% moisture and the average humidity of the air is below 70 to 75%.

If you plan to add supplemental heat, be careful as soybeans are more fragile than corn and can be damaged by drying temperatures above 130o F. These temperatures will cause excessive seed coat cracking and split beans. The relative humidity of the drying air should always be maintained above 40% to protect the integrity of the seed coats and prevent splits. Relative humidity is cut in half for each 20 degrees that the air is warmed. Growers can control the heat and humidity of the drying air by using short burner cycles or by changing the burner jets.

Green and immature soybeans are included in the total damage factor in the U.S. soybean grading standard. Elevators will discount loads containing green and immature soybeans and in some cases may reject entire loads if the damage levels are high. Discounts can be reduced by screening out the small beans, drying the rest to 12% moisture and storing them in aerated bins for at least six weeks. The green color may fade and marketing concerns should be reduced after this amount of time.

This article was produced by the SMaRT project (Soybean Management and Research Technology). The SMaRT project was developed to help Michigan producers increase soybean yields and farm profitability. SMaRT is a partnership between MSU Extension and the Michigan Soybean Checkoff program.