Annually, we conduct a survey to estimate Helicoverpa zea (corn earworm) infestation levels in field corn in mid- to late July. Corn is considered a nursery crop for earworm, allowing the pest to complete a lifecycle and then move on to other crops such as soybean, cotton, and peanut in August. Over 30 years of data show that there is a linear correlation between the infestation level in corn and the amount of soybean acreage that gets treated with insecticide for this pest.

To conduct the survey this year, the number of corn earworms found in 50 ears of corn was recorded in 5 corn fields in each of 27 counties, totaling 6,750 ears and 135 fields sampled. When fields were known to contain Bt or non-Bt corn, this was noted. Otherwise, samples were considered to be random and assumed to be representative of the actual Bt/non-Bt composition in each county. Age of earworms, or if they had already exited the ears, was also recorded (data not shown). We greatly appreciate the help of Virginia Cooperative Extension Agriculture and Natural Resource (ANR) Agents, Virginia Tech faculty and staff, and volunteers in this effort. These cooperators are acknowledged below. We also would like to thank the many growers who graciously allowed us to inspect their fields for earworm.

This survey is intended to be a representative sample, not a complete picture. We always recommend scouting individual fields to determine exactly what is happening in terms of corn earworm as well as other pests and crop problems. Also, please check the black light trap data on the Virginia Ag Pest Advisory and other reports posted weekly to keep up-to-date on the insect pest situation.

Our final batch of corn earworm moths showed only 26% survivorship, down from last week. This season results showed a 37% survival rate for the seasonal total which exceeds all previous years. We are now up to 33 counties where brown marmorated stink bugs were/are present in soybean fields. Most are at pretty low levels compared with last year, but they are much more widespread. This week n some have been found in soybean fields in north central North Carolina. We are taking as much data as we can to help with answers for next season. And, the first kudzu bug nymphs were found in Charlotte County. We are nearing the end of this season in terms of insect pests and advisories…a long summer for sure. 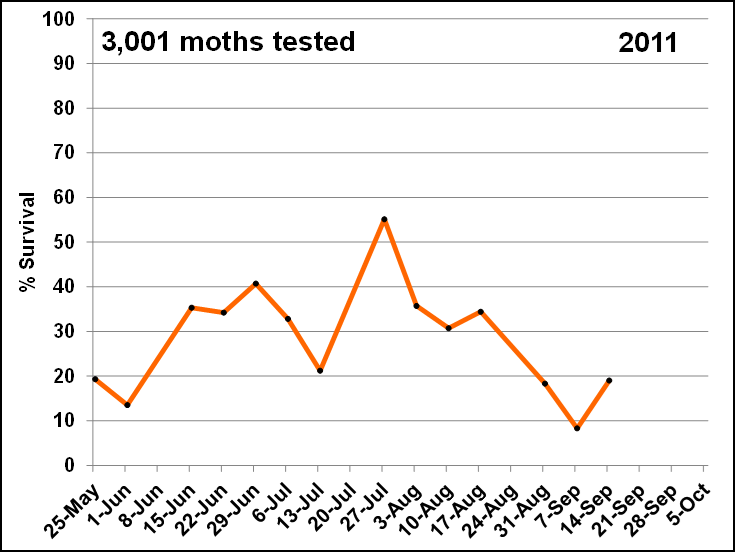 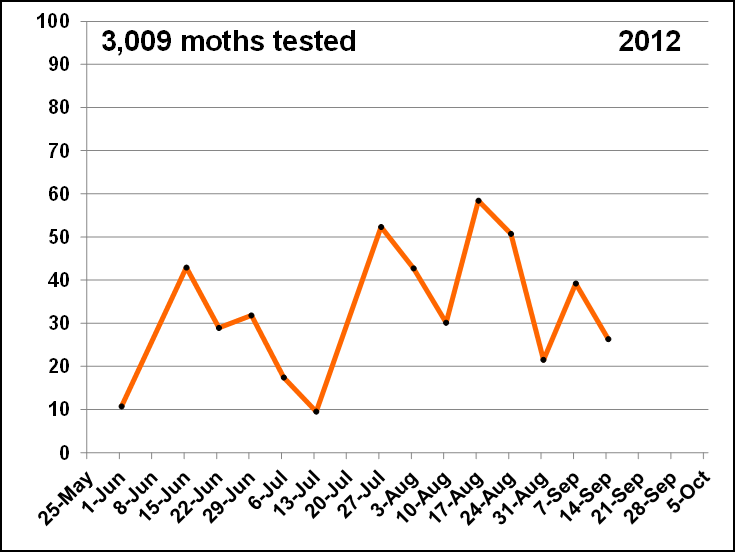 From Ames Herbert via the Virginia Pest Advisory (http://www.sripmc.org/Virginia/)

As of the end of this week (June 29, 2012) we have tested 372 corn earworm (CEW) moths for pyrethroid susceptibility and have a season average of 31.2% surviving the AVT (adult vial test) challenge (see the attached line graph). We had one sample with over 40% survivorship. These are high numbers for the beginning of the season and compare pretty well to what we had at this time in 2011, if not a bit higher. What does this tell us? We cannot claim pyrethroid resistance based on this kind of random survey of moths, but historically, when we see survival numbers of about 25-30% or higher, we can expect some pyrethroid control problems, especially if moth fights are heavy, and the weather turns dry. That combination would almost guarantee control problems. But, if CEW populations reach only low to moderate numbers and the season continues to get plenty of rainfall, field failures will not be nearly as common. With loss of Larvin, an effective non-pyrethroid for controlling CEW, growers will need to turn to other non-pyrethroids like Belt, Coragen (Prevathon**), Steward, or combinations that include a pyrethroid plus a non-pyrethroid either tank mixed (like a pyrethroid + Orthene) or as a product (like Besiege** which contains Karate and Coragen). (**note, the registration status of these products is not certain at this point)